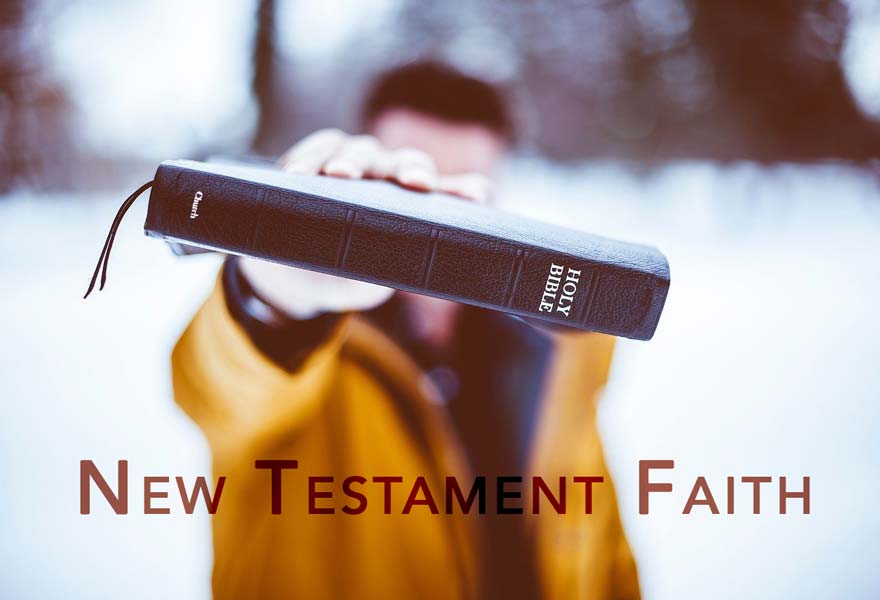 Without a doubt one of the biggest topics of The Bible is faith. Although it’s defined and taught in multiple passages, one of the best ways to learn about it is through examples.

In this article, I’ll share 5 examples of faith found in the new testament. The examples are:

Are you ready? Let’s go!

The Canaanite Woman Refused To Accept No For An Answer

The first new testament example of faith we can learn from is from The Canaanite Woman. Her story is found in Matthew 15:21-28 and she showed faith by refusing to accept no for an answer to her daughter’s healing.

The Bible says that after Jesus and his disciples left the region of Tyre and Sidon, ‘A Canaanite woman from that vicinity came to him, crying out, “Lord, Son of David, have mercy on me! My daughter is demon-possessed and suffering terribly” (Matthew 15:22 NIV).

Initially, Jesus didn’t reply. Matthew 15:23 says “Jesus did not answer a word” (NIV). Jesus’ disciples even said, “Send her away, for she keeps crying out after us” (Matthew 15:23 NIV). But by faith, she didn’t let it deter her.

Jesus eventually answered her saying “I was sent only to the lost sheep of Israel” (Matthew 15:24 NIV). As a Canaanite, it suggested that Jesus wasn’t going to heal her daughter. But her faith was too great to accept that. She knelt before him and shouted, “Lord, help me!” (Matthew 15:25 NIV).

After two signs of “no” as the answer, what Jesus said next should have surely turned her away. He said, “It is not right to take the children’s bread and toss it to the dogs” (Matthew 15:26 NIV). But in faith, she responded, “Even the dogs eat the crumbs that fall from their master’s table” (Matthew 15:27 NIV).

At that point, Jesus gave in. He told her “Woman, you have great faith! Your request is granted,” and immediately her daughter was healed (Matthew 15:28 NIV).

Learning from the Canaanite woman example, having faith means finding a way even when it seems to be no way. Not letting obstacles keep you back or even begging if you must!

See my article 3 Life Lessons From The Canaanite Woman to learn more from her.

The next new testament example of faith we can learn from is in the healing of Blind Bartimaeus. The story of Blind Bartimaeus’ healing can be found in Mark 10:46-52. He showed faith by shouting for Jesus’ mercy even though the people around him tried to hold him back.

It seemed like just another day. Bartimaeus was on the side of the road begging but then a large crowd appeared. Hearing that it was Jesus, The Bible says he began shouting “Jesus, Son of David, have mercy on me!” (Mark 10:47 NIV).

The next verse highlights his faith saying “Many rebuked him and told him to be quiet, but he shouted all the more, “Son of David, have mercy on me!” (NIV). He kept shouting so loud that ‘Jesus stopped and said, “Call him.”’ (Mark 10:49 NIV).

After letting Jesus know that he wanted to see, Jesus said “Go,” “your faith has healed you.” and “Immediately he received his sight and followed Jesus along the road” (Mark 10:52 NIV).

Faith Doesn’t Get Discouraged By Others

What can we learn from Blind Bartimaeus’ example of faith? When you want to achieve something, don’t let others discourage you. Pursuing your goal all the more when others make comments meant to keep you back is having faith.

The Woman With The Issue of Blood Just Touched Jesus’ Robe

Another example of faith in the new testament that we can learn from is The Woman With The Issue of Blood. Found in all three gospels, Matthew 9:20-22, Mark 5:24-34, and Luke 8:43-48, she showed faith by pushing through a crowd of people thinking that she’d be healed if only she touched Jesus’ robe.

I’ll quote Matthew’s account as a summary since it’s only 3 verses long:

20 Just then a woman who had suffered for twelve years with constant bleeding came up behind him. She touched the fringe of his robe,

22 Jesus turned around, and when he saw her he said, “Daughter, be encouraged! Your faith has made you well.” And the woman was healed at that moment.

The gospel of Matthew makes what she did sound simple. Luke provides more details indicating that the crowd almost crushed him. This shows why she only tried to touch Jesus’ robe (Luke 8:42).

“Who touched me?” Jesus asked (Luke 8:45 NIV). Feeling that power went from him, Jesus asked despite all the people pushing up against him. After revealing that it was her, Jesus told the woman with the issue of blood “Daughter, your faith has healed you. Go in peace” (Luke 8:48 NIV).

From the woman with the issue of blood’s example, we can see that a sign of faith is being intentional. It’s having a clear goal in mind that causes you to concentrate all your energy into achieving it.

See my article 3 Life Lessons From The Woman With The Issue of Blood to learn more from her.

The 10 Lepers Started Moving Before They Were Healed

Fourth on the list of new testament examples of faith is the healing of the 10 lepers. Found in Luke 17:11-19, 10 lepers showed faith by beginning to move before they had evidence that they were healed.

Although they weren’t healed instantly, they trusted Jesus and The Bible says “as they went, they were cleansed” (Luke 17:14 NIV). Without any evidence of being healed, they started moving in faith.

As we can see from the example of the 10 lepers, having faith means moving in your desired direction without having everything you need. It’s trusting that your needs will be provided on the way!

See my article 3 Lessons To Learn From Jesus Healing The Ten Lepers to learn more from their story.

The Persistent Widow Didn’t Give Up

The last example of new testament faith I’ll share is from the parable of the persistent widow.  Jesus shared this parable with his disciples in Luke 18:1-8 “to show them that they should always pray and not give up” (Luke 18:1 NIV).

In the parable, a widow showed faith by persistently requesting justice from a judge that didn’t fear God nor cared what people thought. After refusing to grant the widow’s request for some time, he eventually gave in.

Although the persistent widow is just a parable, it’s a great example of having faith. Luke 18:3 says she “kept coming to him with the plea, ‘Grant me justice against my adversary” (NIV).

What’s worth pointing out about the faith of the persistent widow is that she was driven by what she knew she had the right to. By using the word justice, it indicates that there was some law that supported her request.

I explain this further in my article 4 Lessons To Learn From The Parable of The Persistent Widow.

Faith Is Strengthen By Knowledge

From the persistent widow, we see that knowledge can strengthen our faith. Hebrews 11:1 confirms this as it defines faith as “the confidence in what we hope for and assurance about what we do not see” (NIV). The more we know the more confident we are.

It goes back to why Jesus shared the parable in the first place; “to show them that they should always pray and not give up” (Luke 18:1 NIV).

From these new testament examples of faith we see that faith finds a way, faith doesn’t get discouraged by others, faith is intentional, faith starts moving, and faith is strengthened by knowledge. One verse that can summarize all these examples is Matthew 7:7. It says “Ask and it will be given to you; seek and you will find; knock and the door will be opened to you” (NIV).

I hope you were blessed by these 5 new testament examples of faith. To learn more about faith, see my articles: How To Keep The Faith, 3 Life Lessons On Faith In The Bible and 5 Biblical Examples of Lack Of Faith To Learn From.

Filed Under: Learn By Example, Lessons Tagged With: Blind Bartimaeus, faith, New Testament, The Canaanite Woman, The Persistent Widow, The Ten Lepers, Woman With The Issue of Blood