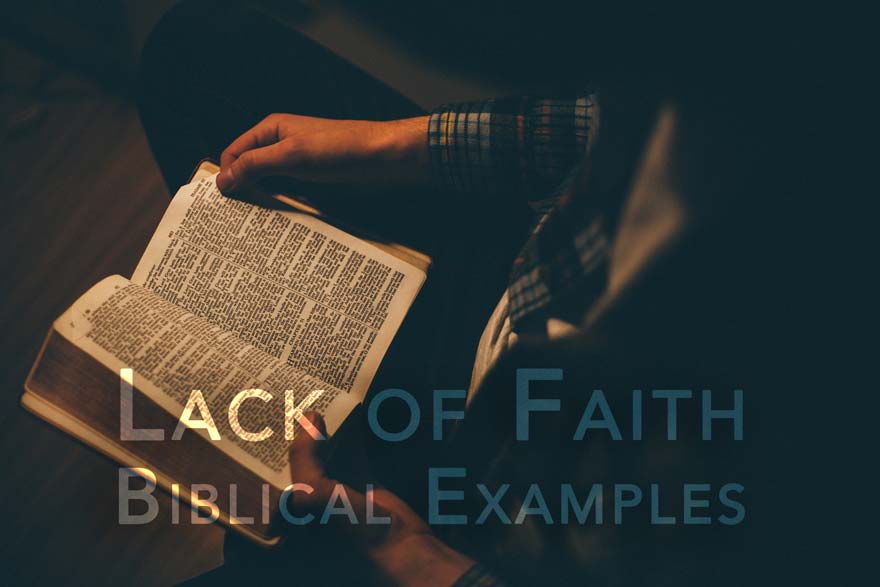 It seems like we only ever hear about those who had great faith. For instance, Abraham leaving his home and being willing to sacrifice his son Isaac, the woman with the issue of blood saying if she could only touch Jesus’ robe she’d be healed, or Blind Bartimaeus dismissing the crowd in order to receive his sight.

Let’s look at each of these examples in more detail and wrap up with what we can learn from them.

The first example I’ll share of a lack of faith in The Bible is when God called Moses. The story starts in Exodus 3 and it recounts Moses’ lack of faith in God’s ability to use him to lead the Israelites out of Egypt.

After grabbing his attention with a burning bush, God told Moses that he saw the misery of the Israelites and that he came to rescue them and to lead them into a spacious land “flowing with milk and honey” (Exodus 3:8 NIV). But after telling Moses to see it through by going to Pharaoh, lacking faith Moses replied, “Who am I that I should go to Pharaoh and bring the Israelites out of Egypt?” (Exodus 3:11 NIV).

But even after God told him that He would be with him and reassured him that the mission was going to be a success, Moses still doubted and began to ask a series of questions further showing his lack of faith.

Moses so lacked faith that eventually God got angry with him and came to a compromise by sending Aaron to speak for him. In the end, Moses completes the mission proving that it was possible despite his doubts.

See 3 Lessons To Learn From The Call of Moses for more on this part of Moses’ story.

The next biblical example of a lack of faith comes from the people Moses was sent to rescue; The Israelites. The Israelites are infamous for their lack of faith. Although God repeatedly proved to them that he would take care of them, they kept doubting him whenever they experienced a challenge.

The Israelites Lacked Faith At The Red Sea

A popular example of where they lacked faith was when they found themselves between the red sea and Pharaoh’s army. When they saw the Egyptians marching after them, they told Moses:

“Because there were no graves in Egypt, have you taken us away to die in the wilderness? Why have you so dealt with us, to bring us up out of Egypt?

Facing the possibility of death, The Israelites began to lose faith. They forgot what God promised them and questioned Moses as if they didn’t know the plan when they left Egypt.

As expected, God came through for them in an unforgettable way. Through Moses He parted the Red Sea so that they could cross and drowned the Egyptian army when they pursued them.

Two chapters later, the Israelites lacked faith again. They complained to Moses about food saying “Oh, that we had died by the hand of the Lord in the land of Egypt, when we sat by the pots of meat and when we ate bread to the full! For you have brought us out into this wilderness to kill this whole assembly with hunger” (Exodus 16:3 NIV).

Imagine that. After all the miracles they experienced they doubted God once more. God came through with food from heaven and the Israelites went on lacking faith multiple times more.

Naaman Underestimated The Way He Was Going To Be Healed

Another biblical example of a lack of faith is found in the story of the healing of Naaman. Found in 2 Kings 5, Naaman was an army commander that had leprosy. An Israelite girl told him that the prophet Elisha could heal him, but when he went to be healed he almost missed out because he didn’t believe he could be healed the way Elisha advised.

Perhaps Naaman’s lack of faith began when the prophet decided to send his messenger rather than meet with Naaman himself. 2 Kings 5:10 says “ Elisha sent a messenger to say to him, “Go, wash yourself seven times in the Jordan, and your flesh will be restored and you will be cleansed” (NIV).

In response, Naaman got angry and said:

“I thought that he would surely come out to me and stand and call on the name of the Lord his God, wave his hand over the spot and cure me of my leprosy.

Are not Abana and Pharpar, the rivers of Damascus, better than all the waters of Israel? Couldn’t I wash in them and be cleansed?”

After he said that, The Bible says he was turned off. Naaman’s lack of faith stemmed from having the wrong expectations. He had the faith that he could be healed, but lacked faith in the unusual way it was supposed to happen.

Fortunately, Naaman’s servant gave him some perspective by telling him “My father, if the prophet had told you to do some great thing, would you not have done it? How much more, then, when he tells you, ‘Wash and be cleansed’!” (2 Kings 5:13 NIV). Naaman listened, went down to the river, dipped seven times and just as the prophet said, he was healed (2 Kings 5:14).

Learn more about Naaman in my article: 3 Life Lessons From The Story of Naaman

The People From Jesus’s Hometown Were Too Familiar

The next example of a lack of faith in The Bible comes from the new testament. It’s when Jesus went to his hometown but couldn’t do many miracles because the people didn’t believe in him. You can find the story in Mark 6.

Because they were familiar with Jesus, their lack of faith was evident from their comments.

“Where did this man get these things?” they asked. “What’s this wisdom that has been given him? What are these remarkable miracles he is performing?

Isn’t this the carpenter? Isn’t this Mary’s son and the brother of James, Joseph, Judas and Simon? Aren’t his sisters here with us?” And they took offense at him.

In response, The Bible says Jesus “was amazed at their lack of faith” (Mark 6:6 NIV) and as a result, they missed out on experiencing more of his great works.

Thomas Said He’d Believe When He Saw For Himself

The last example of a lack of faith we’ll look at is also from the new testament. It’s found in John 20 and it is about Thomas not believing Jesus resurrected until he saw for himself.

After his fellow disciples had seen Jesus after he resurrected they told Thomas. Rather than take their word for it he said “Unless I see the nail marks in his hands and put my finger where the nails were, and put my hand into his side, I will not believe” (John 20:25 NIV).

A week later The Bible says Jesus appeared to them and he told Thomas “Put your finger here; see my hands. Reach out your hand and put it into my side. Stop doubting and believe” (John 20:27 NIV).

Jesus gave him the evidence he said he wouldn’t believe without. Afterward, Jesus made an important point. He said, “Because you have seen me, you have believed; blessed are those who have not seen and yet have believed” (John 20:29 NIV).

How true, it’s nothing like believing in something that you have no evidence of then seeing it was true. Because he had a lack of faith, Thomas missed out.

One key thing stands out from these biblical examples of a lack of faith. None of the characters who lacked faith turned out to be right. That is, although Moses doubted he could, he eventually did. Whenever the Israelites doubted God, he always came through.

Naaman indeed got healed by dipping seven times in the Jordan. Just because Jesus’ hometown were familiar with him, it didn’t mean he wasn’t great. And Jesus was truly alive although Thomas didn’t believe.

Just because we may not believe in something doesn’t mean it isn’t true. If you are lacking faith today, remember that there were others before you that did also. May you gain faith by knowing what happend in the end of each of their stories.