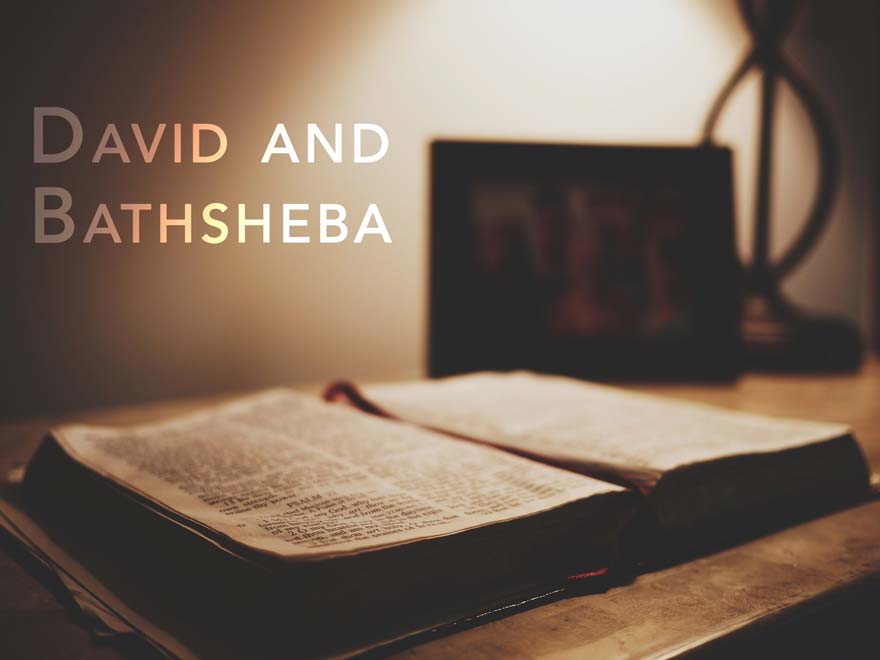 The story of David and Bathsheba isn’t a happy one. Nonetheless, like other stories in The Bible, it’s one we can learn from. If you are unfamiliar with the story, it’s found in 2 Samuel 11-12. Below is a summary.

Summary of The Story of David and Bathsheba

David was home while his army was out to war. While walking on the roof of his palace he saw Bathsheba bathing in the distance. Since she was beautiful David had people find out who she was and even though he later found out she was married, he slept with her.

As a result, Bathsheba got pregnant by him. To cover it up, David called her husband back from the war and tried to get him to sleep with her. After failing to do that, he devised a plan to have him killed in the war.

God wasn’t pleased with what David did, so he sent the prophet Nathan to condemn him. The punishment for his actions was the death of the child Bathsheba had for him. David tried to change God’s mind by fasting and pleading, but it was pointless. The child still died. Later David and Bathsheba had Solomon, who eventually took over the throne from David.

In this article, we’ll look at 3 life lessons from the story of David and Bathsheba. The lessons are: stop while you’re ahead, bad things happen to good people, and there are consequences to our actions.

Stop While You’re Ahead

The first life lesson we can learn from the story of David and Bathsheba is to stop while we are ahead. David had two opportunities to stop while he was ahead, but because he didn’t it led him to sin.

When David saw Bathsheba bathing on the roof, The Bible implies that he had lustful feelings towards her by following him seeing her with the statement “the woman was very beautiful” (2 Samuel 11:2 NIV). Understanding how he felt about Bathsheba, it was David’s first opportunity to stop while he was ahead. But rather than stop, David sent someone to find out about her.

David then learned that Bathsheba was married and so opportunity number 2 presented itself. But with his mind already set on what he wanted, it was hard for him to leave it there. 2 Samuel 11:4 says “David sent messengers to get her. She came to him, and he slept with her” (NIV).

David’s lead up to committing adultery with Bathsheba is similar to how we can find ourselves in problems in life if we don’t stop while we are ahead. In the beginning, when the decision is easy, we should look ahead at what the decision could lead to and decide to end it there to protect ourselves.

Proverbs 27:12 says “The prudent see danger and take refuge, but the simple keep going and pay the penalty” (NIV). Unlike David when he initially saw Bathsheba, in life, we should be prudent by seeing the danger in making certain choices. If we don’t, we’ll find ourselves paying the penalty.

By reading this article, chances are you lived long enough to see the reality of this life lesson from the story of David and Bathsheba. Uriah, who had proven himself to be a good man, ended up losing his life because of David. As it was no fault of his own, this part of the story teaches us that bad things happen to good people.

For reference, we see that Uriah was a good person by the reason he gave for not going home to his wife. David had recently sent for him to return from the war and was trying to get him to sleep with his wife so that he would believe he impregnated Bathsheba. But instead of going home, he slept at the entrance of David’s house. Why? He told David:

“The ark and Israel and Judah are staying in tents, and my commander Joab and my lord’s men are camped in the open country. How could I go to my house to eat and drink and make love to my wife? As surely as you live, I will not do such a thing!”

In other words, he could not get comfortable knowing what his fellow soldiers were going through. But despite being the type of person that he was, he still ended up dying by David’s instructions.

Such is life, we can do everything right but still suffer unduly. Sometimes I find myself wondering what I did wrong whenever I get sick or something bad happens. Yes, in some cases it’s the delayed result of our actions (as I’ll point out in a later lesson), but it isn’t always our fault.

If you know the story of Job, you know that he didn’t do anything to deserve all his troubles. Similarly, Jesus was perfect yet he was crucified. This is a hard life lesson we must accept.

There Are Consequences To Our Actions

The next life lessons from David and Bathsheba may seem obvious, but it is one that we often need to be reminded of. The lesson is that there are consequences to our actions. The results of David’s adultery with Bathsheba had multiple consequences and although David tried to prevent one of them, he could not.

As a result of David and Bathsheba’s adultery, Bathsheba became pregnant. But because God was displeased with what took place, God told David “because by doing this you have shown utter contempt for the Lord, the son born to you will die” (2 Samuel 12:14 NIV).

What David did next is what we may find ourselves doing as believers and it’s where this lesson as a reminder is necessary. When the child got ill, 2 Samuel 12:16 says “David pleaded with God for the child. He fasted and spent the nights lying in sackcloth on the ground” (NIV). At this point David was sorry. Earlier when the prophet Nathan condemned him, David acknowledged that he had sinned (2 Samuel 12:13). But with the punishment already established, the child died despite David’s pleading and fasting.

Learning from David’s consequences despite pleading and fasting, we should know that repenting doesn’t exempt us from the consequences of our actions. In some cases, we don’t see the immediate consequence, but later we may find ourselves confused as to why we are facing a particular issue that is related. In other cases, while we may repent and be forgiven by God, we’d still have to pay the penalty according to the law of the land.

The story of David and Bathsheba has many lessons. In this article, we focused on 3 of them. The lessons you learned were to stop while you’re ahead, bad things happen to good people, and there are consequences to our actions. I hope you were blessed!

Other articles including David: