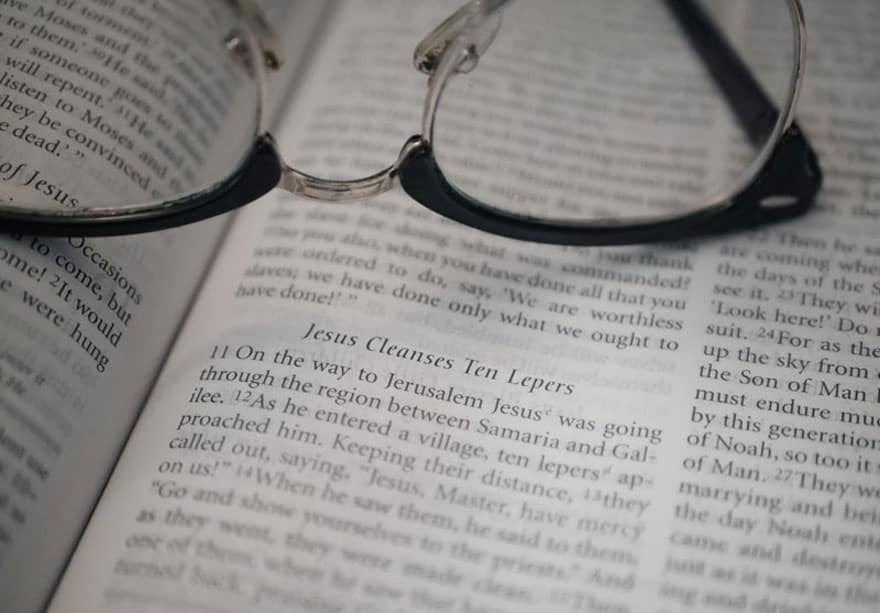 In the story of Jesus healing the ten lepers, there are 3 lessons to learn that will help you get what God has for you and give you a renewed perspective of receiving gratitude and the respect of those closest to you.

The story is found in Luke 17:11-19 and in summary, ten lepers asked Jesus to have pity on them. Jesus did and told them to go show themselves to the priests. As they went, they were healed but only one of them upon realizing it, came back praising God and thanking Jesus.

So what three lessons are there to learn from the healing of the ten lepers?

The first lesson to learn from Jesus healing the ten lepers is to start moving in faith. When the ten lepers called out with a loud voice “Jesus, Master, have pity on us!”, Jesus told them to “Go, show yourselves to the priests” (Luke 17:13-14 NIV). After this, The Bible didn’t say they were healed instantly, instead, it says “as they went, they were cleansed” (Luke 17:14 NIV).

According to Leviticus 13, the priests were responsible for declaring a person clean or unclean when they had leprosy. When the 10 lepers saw that they still had leprosy even though Jesus told them to go show themselves to the priests, they could have concluded that nothing changed and that it was going to be a waste of time going to them. Instead, they started moving in faith and were healed as a result.

Learning from this, as believers we should start moving in faith when God tells us to, even though we don’t see any evidence of it working out. This is exactly what faith is according to The Bible.

Like the ten lepers, we should trust in God’s word simply because of who God is. Abraham, like the ten lepers, moved in faith when God told him to go. Hebrews 11:8 states that “By faith Abraham, when called to go to a place he would later receive as his inheritance, obeyed and went, even though he did not know where he was going” (NIV).

What blessing that’s ahead of you, that you need to start moving in faith to receive? Maybe you want your own home and God is telling you to start the process even though you don’t have any money. This was the case for my sister who lives in Haiti.

An Example of Starting To Move In Faith

With the pressure of having to leave the place she was renting, she used the little that she had to start building a small home on a property she still owed money for. She did not have the means to build anything worth talking about, but because she started, family members in Haiti and other parts of the world started contributing to help her build a home she couldn’t dream of building in the beginning!

So whatever it may be, as the ten lepers started moving in faith, and were cleansed as they went, start moving in faith also. As you go, the way will become clearer.

Trust in the Lord with all your heart and lean not on your own understanding; in all your ways submit to him, and he will make your paths straight.

You Won’t Always Be Thanked

The second lesson to learn from Jesus healing the ten lepers is that you won’t always be thanked. Of the ten lepers that Jesus healed, “One of them, when he saw he was healed, came back, praising God in a loud voice. He threw himself at Jesus’ feet and thanked him…” (Luke 17:15-16 NIV). Although Jesus probably wasn’t surprised by this, he asked “Were not all ten cleansed? Where are the other nine?” (Luke 17:17 NIV).

In the same way that only one of the ten lepers thanked Jesus for healing him, we should learn that we won’t always be thanked by everyone we help. In warning his disciples of what to expect after he left, Jesus told them “‘a servant is not greater than his master.’ If they persecuted me, they will persecute you also. If they obeyed my teaching, they will obey yours also” (John 15:20 NIV). If Jesus himself wasn’t shown gratitude by all ten lepers for a healing act, how much more won’t we by some of the people we help.

Expecting Gratitude Can Make You Bitter

But you may be wondering why is this a lesson to learn. You see, some of us can become bitter because someone didn’t thank us for what we did for them. As a parent, it might be that you become resentful because your child doesn’t show you love in return for your the hard work and sacrifices you made to raise them. It could also be that you gave someone a gift for their birthday, and although they said thank you when they received it, you expect a true symbol of gratitude by receiving a gift in return. Not getting anything may cause you to hold it against them in your heart.

So recognizing that we won’t always be thanked, avoids us being angry and bitter towards others because we feel like people should show gratitude. Naturally, people expect gratitude, but it seems like generally, people don’t give it. If he wanted to, Jesus could have taken his healing back from the lepers that didn’t say thanks, but being who he is, he didn’t.

Thank Others When They Help You

A related lesson is to thank others when they help you. After all, we know how it feels when people don’t show us gratitude, so why not show gratitude to others? If a sermon inspired you, thank the speaker for allowing God to use them. If someone with a YouTube helped you solve a problem, give the video a like or comment (I need to do this more). Follow the example of the one leper that came back to thank Jesus. It doesn’t take much to do, but it makes a big difference.

Foreigners May Show You More Honor

A point that Luke emphasizes in the healing of the ten lepers brings us to the third lesson to learn. It has to do with the identity of the one leper that came back praising God and thanking Jesus. When the leper, fully healed returned, Luke indicates that “he was a Samaritan” (Luke 17:16 NIV). Furthermore, Jesus himself asked, “Has no one returned to give praise to God except this foreigner” (Luke 17:18 NIV)? So what is the lesson?  Foreigners may show you more honor.

Samaritans and Jews Hated Each Other

If you didn’t know, Jesus was a Jew, and Jews and Samaritans hated each other. This is why the woman Jesus spoke to at the well asked him “How is it that you, a Jew, ask for a drink from me, a woman of Samaria?” (John 4:9 ESV) and why Jesus used a Samaritan to make his point in the parable of The Good Samaritan (Luke 10:25-37).

This teaches us that the people we least expect to honor us may do it more than the ones we expect to. When Jesus was in his hometown he couldn’t do many miracles there because the people were so familiar with him that they questioned where he got his power. In response, Jesus said, “A prophet is not without honor except in his own town, among his relatives and in his own home” (Mark 6:4 NIV).

The Bible doesn’t say if all of the ten lepers were Samaritans but given that Jesus was traveling between Samaria and Galilee and it was emphasized that it was the leper, that was a foreigner that came back, we can assume that a least a few of the other lepers were Jews; his own people.

So with this understanding, we should not be surprised if the people closest to us don’t honor or thank us for the things we do for them. It happened to Jesus. Also, we should show love to foreigners, because, like the one leper that came back, they may be the ones to honor us.

So those are three lessons to learn from Jesus healing the ten lepers. You learned to start moving in faith, you won’t always be thanked, and foreigners may show you more honor. The path gets clearer when you start moving, not expecting thank yous prevents you from becoming bitter, and knowing that foreigners may show you more honor prepares you for the likely let down from the people most familiar with you.