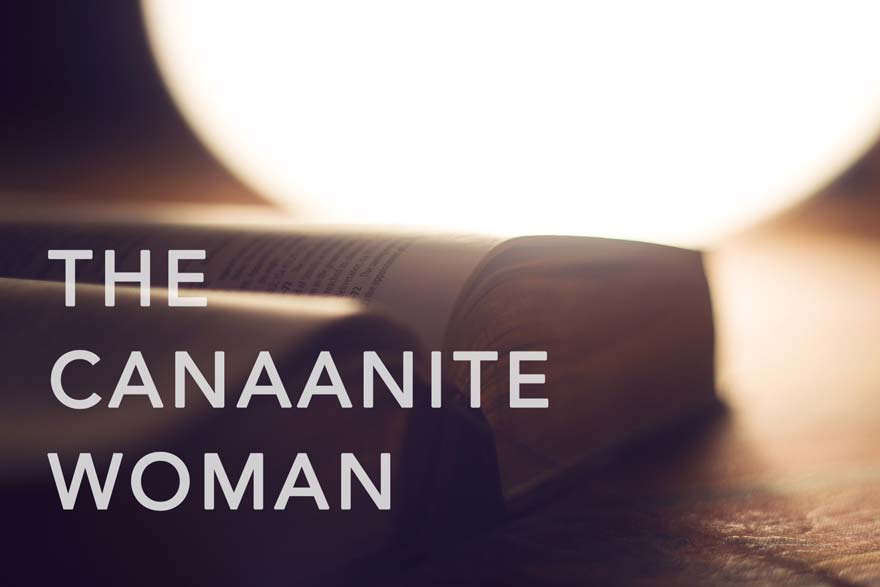 The story of the Canaanite woman is one of many stories in The Bible of the power of faith. If you are unfamiliar with the story, it’s found in Matthew 15:21-28. In summary, a gentile woman (Canaanite) persistently asks Jesus to heal her demon-possessed daughter. Jesus repeatedly appears to deny her request, but in the end, she receives it.

In this article, I’ll share 3 life lessons from the Canaanite Woman. The lessons are:

During the story of the Canaanite woman, there were three times that her request seemed to be rejected by Jesus. Although it seemed that way, her request to have her daughter healed was granted in the end. This teaches us that things aren’t always what they seem.

The first time the Canaanite woman requested Jesus’ help, The Bible says “Jesus gave her no reply, not even a word” (Matthew 15:23a NLT). Completely ignoring someone when they speak to you doesn’t seem Christ-like, but Jesus being who he is probably remained silent to test her.

Despite Jesus’ silence, the Canaanite woman continued asking. She asked so much that the disciples told Jesus “Tell her to go away…She is bothering us with all her begging” (Matthew 15:23b NLT). From the start, when Jesus didn’t give any reply, most of us would think that he didn’t care or the answer was no, but as you know, that wasn’t the case.

Don’t Make Conclusions Based On How Things Seem

In life, we may conclude that something is the case when it only appears to be. If we do, we may miss out on opportunities. At no point did Jesus tell the Canaanite woman no. But from his responses, that seemed to be the answer.

Whether it’s something someone says or something we experience, we shouldn’t use it to make conclusions for everything else. A rejected request for one person doesn’t mean rejection for you. A desire that appears impossible to achieve just might be. This brings us to the next life lesson from the Canaanite woman.

Don’t Give Up – Persistence Leads To Success

When the answer to her request appeared to be no, the Canaanite woman kept asking. In the end, she got what she requested. This teaches us that we should not give up as persistence leads to success.

As I highlighted in the lesson that things aren’t always what they seem, the Canaanite woman despite what appeared to be a denied request kept asking for Jesus’ help. Considering how persistent she was, it’s a good chance that she would have continued asking even if Jesus told her no explicitly.

One of the reasons we should not give up is that the process of persisting may be what’s required to succeed. When Jesus granted the Canaanite woman’s request, it was after a back and forward conversation. One of the last things Jesus said to her was “It isn’t right to take food from the children and throw it to the dogs” (Matthew 15:26 NLT). After the Canaanite woman replied “even dogs are allowed to eat the scraps that fall beneath their masters’ table” Jesus commented on her faith and granted her request.

In the same way that the Canaanite woman appeared to be failing but then her persistent requests opened the door that led to an answer, so it is with failures in our pursuits. The first failures make us more knowledgeable, clarifies the path forward, and may possibly lead to greater success. But if we let the initial failure stop us, we’d miss out. So don’t give up when you fail. See what appears to be a failure as a learning experience and use the new information to move forward smartly.

We Don’t Need As Much As We Think

Promptly the Canaanite woman replied, “even dogs are allowed to eat the scraps that fall beneath their masters’ table” (Matthew 15:27 NLT). Right after that, Jesus granted her request.  Thinking of the help Jesus gave the Caananite woman as scraps of food that fell from a table, we can see that we don’t need as much as we think in order to get what we desire.

Imagine if the Canaanite woman thought she needed Jesus’s full attention and physical presence at her daughter’s side in order for her to be healed. We could say that it would be like wanting a significant part of the food on the master’s table. If the Canaanite woman thought that way, she may have not said anything about getting the scraps and in turn, may have missed out on her daughter’s healing.

It’s similar to the attitude of the woman with the issue of blood. Instead of thinking she needed Jesus’ full attention, She said to herself, “If I only touch his cloak, I will be healed” (Matthew 9:21 NIV). And with only that, she was healed. If she thought more was necessary, she may not have gotten it. See my article 3 Life Lessons From The Woman With The Issue of Blood to learn more about her.

A Little Goes A Long Way

If we look at life with the attitude of the Canaanite woman, we’d be able to get more of our desires. Although all may appear to be lost in a situation, pursuing any glimmer of hope may make the difference that we need.

You might be busy with family and a job you dislike and think that you don’t have time to pursue your dreams. But being willing to work with the 5 or 10 minutes here and there may help you to progress. Similarly, you may think you can’t save money because you’re not able to put away large sums at a time. But if you gather little by little, over time you’ll have much.

Take on the attitude of the Canaanite woman by being willing to accept the scraps in life. You’ll be surprised at how much you will achieve.

What appears to be just another biblical character with faith has some noteworthy life lessons. The story of the Canaanite woman teaches us that Things Aren’t Always What They Seem, Don’t Give Up – Persistence Leads To Success, and We Don’t Need As Much As We Think. If you’re in what appears to be an impossible situation, don’t give up! It may not take as much as you think.

2 replies to 3 Life Lessons From The Canaanite Woman