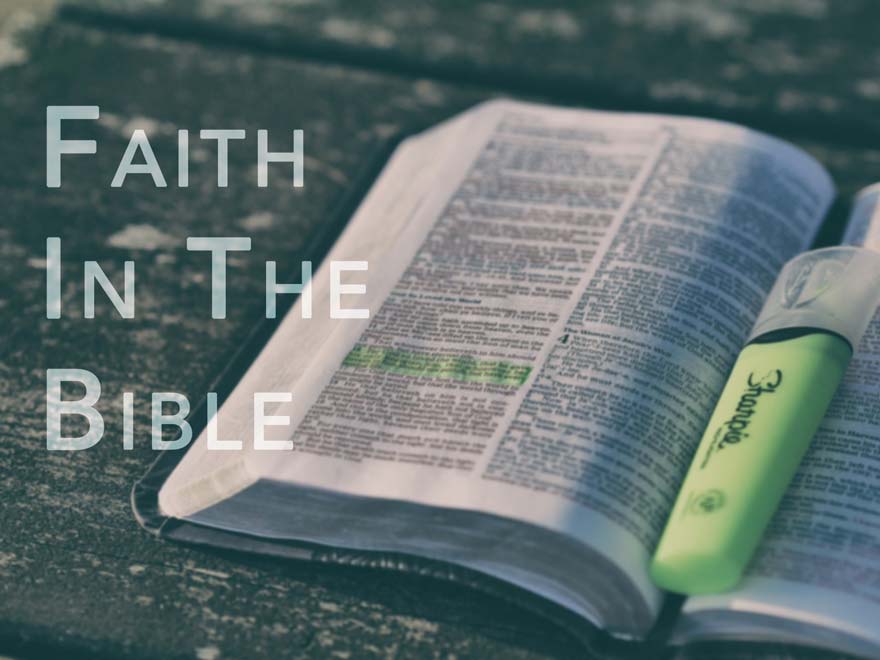 Faith is a major theme of The Bible. It’s required to believe in The Bible itself and everyone has it in one thing or another, whether they are a Christian or not. In this article, I’ll share 3 life lessons on faith based on The Bible.

The lessons on faith in The Bible are:

The first lesson on faith from The Bible is that it goes hand in hand with action. James 2:14-26 talks about faith and its need for works. It concludes by saying “As the body without the spirit is dead, so faith without deeds is dead” (James 2:26 NIV).

The true evidence of our faith is in our actions. To say that you have faith in something is one thing, but to show you have faith in it is another. You’ve probably heard the saying “actions speak louder than words”. The Bible has many examples of this.

A popular example of a biblical person that showed faith through actions is Abraham. Abraham showed his faith through actions on multiple occasions. When God called Abraham in Genesis 12, he told him to leave his country, people, and household to go to a land that he would later show him. How did Abraham show faith? Although he did not know exactly where he was going, he “went, as the Lord had told him” (Genesis 12:4).

Another example of Abraham’s faith going hand in hand with action is when God told him to sacrifice his son Isaac. He went to do just as God told him and when God saw that he was going through with it, he stopped him and said “Now I know that you fear God” (Genesis 22:12 NIV).

In both cases, it was not something that Abraham said that made him a man of faith, it was what he did that proved it.

Other Biblical Examples of Faith

As stated, there are many examples in The Bible of faith going hand in hand with actions. The woman with the issue of blood had to reach out to touch Jesus to be healed (Luke 8:43-48). Blind Bartimaeus, continually shouted “Jesus, Son of David, have mercy on me!” although those around him told him to be quiet (Luke 18:38-39). In both cases, and others like it, Jesus told them their faith made them well. See Hebrews 11 for a long list of old testament examples of faith in action.

So according to The Bible, faith goes hand in hand with action. Take a careful look at your actions to see if they reflect your faith. When the two are aligned it represents true faith. When they are not, it’s dead faith.

Faith Can Be Developed

The second lesson on faith from The Bible is that it can be developed. Most of us start with little faith. As we gain more experience in life we begin to develop more of it. This includes faith in God and in ourselves. A great example of this from The Bible is David and the process that led him to believe he could defeat Goliath.

David grew up watching over his father’s sheep. To convince king Saul that he could defeat Goliath, he told him that he often fought off bears and lions to protect the sheep. He then told Saul that Goliath will be like one of them. As you probably know, David did defeat Goliath. Based on his own words, the faith he had in himself and God to do it developed from his earlier experience defeating lions and bears.

In speaking about how people could ever come to believe in Jesus, Paul said “So faith comes from hearing, that is, hearing the Good News about Christ” (Romans 10:17 NLT). In addition to the initial hearing that we all do that begins our process of believing, continual hearing is necessary to grow in faith.

What we hear affects our faith. If we hear something frequently we will begin to believe it. Have you ever had faith in an idea, but lost faith in it because of people’s negative comments towards it? In actuality, what you heard caused you to develop faith. That is, you developed faith against the idea. Similarly, hearing positive comments would have built your faith in it.

You can never have faith in something that you never hear about and you can’t maintain or develop that faith if you don’t continually hear and learn more about it.

Based on David’s story and Paul saying faith comes by hearing, The Bible indicates that faith can be developed. Like David, each challenge you face presents an opportunity to develop your faith. James 1:3 says “the testing of your faith produces perseverance” (NIV). Additionally, surrounding yourself with information that reinforces what you believe also builds your faith.

Faith Determines The Life You Live

Building on top of the lesson that faith goes hand in hand with action, the third lesson on faith from The Bible is that it determines the life you live. If you think about it, it is our actions in life that greatly determine what we get out of it. So if faith is required for us to take action, it also means faith determines the life we live.

The Israelites Lack of Faith

In the story of the Israelites, God promised them “a land flowing with milk and honey” (Exodus 3:17 NIV). But while they were on the cusp of receiving it, their lack of faith in God’s ability to help them defeat the inhabitants delayed them 40 years. That delay caused some of them to miss the promised land completely (Numbers 13-14). If they had the faith they would have been better off.

Naaman Almost Missed His Healing Due To A Lack of Faith

Naaman, an army commander, almost missed out on a life free from leprosy because he didn’t have faith in Elisha’s instructions on how to be cleansed of it. He was told to wash seven times in the Jordan, but instead of believing it, he got angry because it wasn’t what he was expecting. If it weren’t for his servant convincing him to listen, he would continue living with leprosy due to his lack of faith.

Such is life. If you don’t believe something can happen for you, you’ll never take the steps to make it happen. As stated in the first lesson, Jesus told the woman with the issue of blood, blind Bartimaeus, and many others that their faith made them well. Due to a lack of faith Naaman almost missed out on his healing and some of the Israelites didn’t enter the promised land. Learn this lesson on faith from The Bible. Don’t let a lack of faith cause you not to live the better life you could live.

As a major theme, it’s not surprising that The Bible has lessons we can learn about faith. In this article, we looked at 3. They were faith goes hand in hand with action, faith can be developed, and faith determines the life you live.

2 replies to 3 Life Lessons On Faith In The Bible