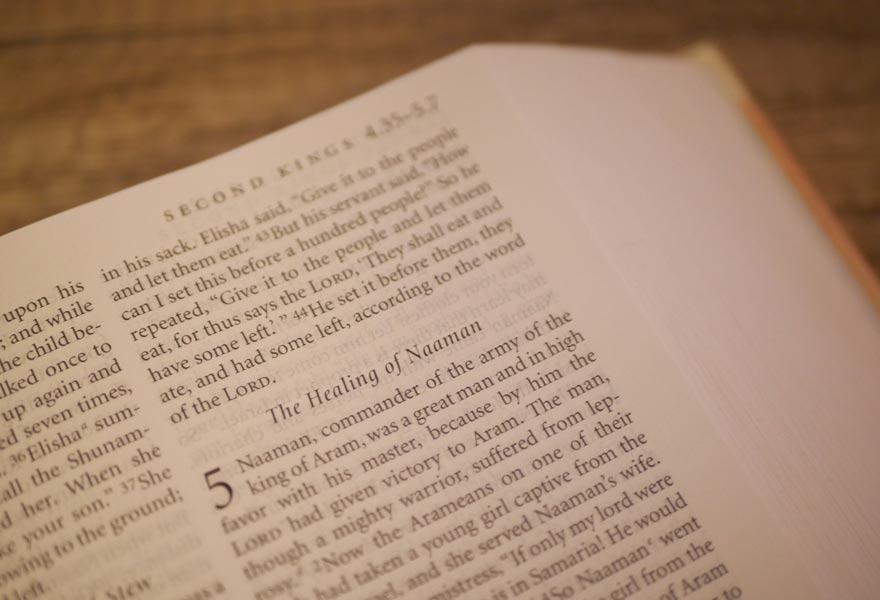 2 Kings 5 walks us through how an army commander by the name of Naaman got healed of leprosy. If you are unfamiliar with this story, the chapter is only 27 verses long and can be read on Bible Gateway by clicking here.

In this article, I’ll share 3 life lessons that the story of Naaman teaches us. The lessons are:

People That Seem To Have It All, Don’t Always

The Bible introduces Naaman by saying some wonderful things about him. It says “Naaman was commander of the army of the king of Aram,” “a great man in the sight of his master and highly regarded,” and “a valiant soldier” (2 Kings 5:1 NIV).

Despite having all those wonderful things going on in his life, 2 Kings 5:1 goes on to say “but he had leprosy”. This leads us to the first life lesson we can learn from the story of Naaman; people that seem to have it all, don’t always.

Desiring To Be In Someone Else’s Place

Sometimes we can find ourselves desiring to be in other people’s place because they seem to have it all. But though it appears they do, it isn’t always the case. Like Naaman, who most likely covered his leprosy as best as he could, people normally hide things about themselves that make them look bad. As a result, only the good aspects of their lives stand out, leading us to believe that they have no problems.

Learning of issues the people we want to be like have, we’d likely change our minds about being in their place. Think about it, if you lived in Naaman’s time and were a lowly citizen, would you switch lives with Naaman knowing he had leprosy? Most likely not.

Abraham Appeared To Have It All

In the same way that Naaman appeared to have it all, Abraham also appeared to have it all for most of his life. Referencing Abraham before God changed his name, Genesis 13:2 says “Abram had become very wealthy in livestock and in silver and gold” (NIV). Although he had wealth and God continued to promise him a great future, we find him in Genesis 15:2 asking God “what good are all your blessings when I don’t even have a son?” (NIV).

To learn more about Abraham and life lessons from his story, see my article: 5 Life Lessons From The Story of Abraham.

Great Advice Can Come From The Least Likely Sources

The next life lesson from the story of Naaman is one that I’m continuously reminded of. Whether it’s friends, family, or coworkers, we can find ourselves ignoring their great advice because we don’t see them as a source of knowledge or respect their opinions.

Twice in the story of Naaman, we can see him taking advice from the least likely sources leading him to be healed. The first is from the young servant girl from Israel that served Naaman’s wife. She said, “If only my master would see the prophet who is in Samaria! He would cure him of his leprosy” (2 Kings 5:3 NIV). In the next verse, it says “Naaman went to his master and told him what the girl from Israel had said” (NIV), indicating that he took the advice of the girl seriously.

Here you have a commander of an army listening to the advice of a young girl, of a different nationality, who was captured from her country and working for his wife as a servant. Given her status, it’s surprising that Naaman listened.

Naaman Takes Advice From His Servants

The second time Naaman took advice from his servants. When he was about to ignore Elisha’s simple instructions of how to be healed, they said “My father, if the prophet had told you to do some great thing, would you not have done it? How much more, then, when he tells you, ‘Wash and be cleansed’!” (2 Kings 5:13 NIV).

As a result, The Bible then says Naaman “went down and dipped himself in the Jordan seven times, as the man of God had told him, and his flesh was restored and became clean like that of a young boy” (2 Kings 5:14 NIV).

If Naaman didn’t take the advice of the Israelite girl and his servants because of who they were he would have missed out on being healed. Learning from him, we shouldn’t despise the advice of people because of who they are. In my experience, this happens a lot with family members. Because we’re most familiar with them, we easily overlook their suggestions. Once my wife recommended that I read The Alchemist, saying it has a lot of life lessons. Since it was a novel, I ignored it. But later on, after hearing a coworker speak about it, I thought about the book more seriously.

The Wrong Expectations Can Keep You Back

When Elisha told Naaman to dip 7 times in the Jordan to be healed, The Bible says ‘Naaman went away angry and said, “I thought that he would surely come out to me and stand and call on the name of the Lord his God, wave his hand over the spot and cure me of my leprosy”’ (2 Kings 5:11). The chapter doesn’t say where Naaman got that idea from. Maybe he saw someone get healed that way or heard stories. No matter what made him think of it, those wrong expectations were going to keep him back from being healed.

In the same way, Naaman almost missed out because Elisha’s instructions weren’t what he was expecting, in life our expectations can keep us back. Those more successful than us may give us the secret to their success, but because it appears too simple or not in alignment with our experience we ignore it. Similarly, in ignorance, we may not know how much effort is required to achieve a certain goal. As a result, the effort that may be normal for the result we desire could seem unreasonable causing us to give up.

I mentioned in the first lesson how Abraham had it all but didn’t have a son. Later in his story, he and his wife Sarah reasoned that they were too old and expected God to give them a son through Sarah’s servant Hagar. As you may know, that expectation was wrong and it led to a series of other issues.

With that said, if you ever find yourself getting angry like Naaman over what it takes for something to be done, check your expectations. Are they reasonable? How did you develop them? Often we have no idea how something should happen, yet with the wrong expectations, we jump to conclusions that keep us back.

The story of Naaman is memorable and filled with lessons. You learned that people that seem to have it all, don’t always. Great advice can come from the least likely sources. And the wrong expectations will keep you back.