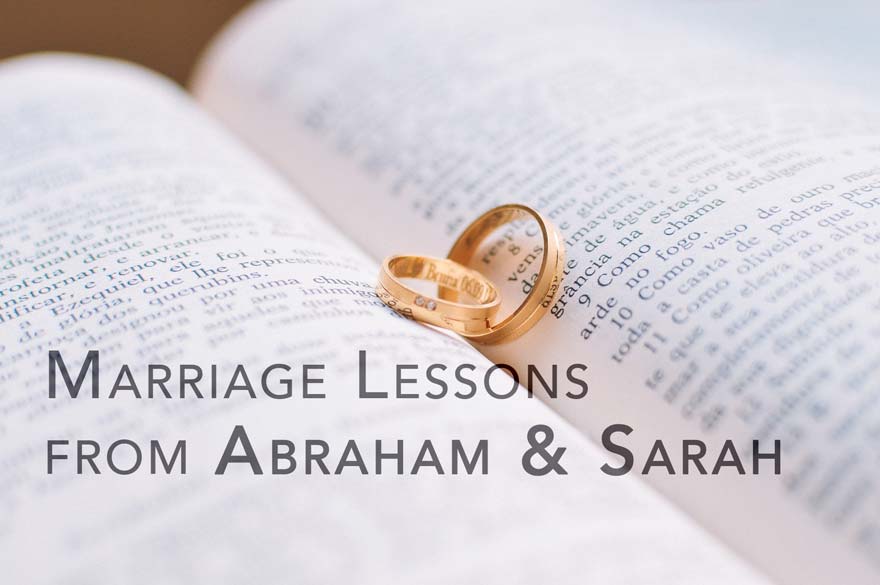 Have you ever wondered what the secret is to a successful marriage? I’m sure most couples have. In my experience, there isn’t a magic formula. Instead, there are a series of ideas working collectively. In the story of Abraham and Sarah, we find a few.

Take Your Spouse With You

Abraham Took His Wife Sarah When He Was Called

The first marriage lesson from Abraham and Sarah is to take your spouse with you. When God called Abraham (at the time his name was Abram), Genesis 12:1 says ‘The Lord had said to Abram, “Go from your country, your people and your father’s household to the land I will show you”’ (NIV). Notice that God’s command to go was addressed to Abraham and in the following verses (2-3) God promised to bless him and make him a great nation.

Although from scripture God didn’t explicitly say to Abraham that he should take his wife Sarah (Sarai), Genesis 12:5 says “He took his wife Sarai, his nephew Lot, all the possessions they had accumulated and the people they had acquired in Harran, and they set out for the land of Canaan, and they arrived there” (NIV).

The fact that Abraham took his wife Sarah when God called him teaches us a valuable lesson as married couples. That lesson is to not leave our spouse out of what God called us to do. The Bible says that marriage makes the two become one flesh (Genesis 2:24), so from God’s perspective, a call to one includes both. So it goes without saying that you and your spouse should go together even when it appears that just one of you was called.

I want to add that taking your spouse with you doesn’t mean your spouse has to be equally responsible in the mission God gave you. Simply don’t think you have to leave your spouse out if God calls you to do something. Not including your spouse doesn’t line up with scripture.

I expand on the Call of Abraham in the first point of my article 5 Life Lessons From The Story of Abraham.

The next marriage lesson from Abraham and Sarah is that your collective judgment isn’t always enough. Have you ever did something without consulting your spouse but later wish you did? Deciding on things together as a married couple is critical to a successful marriage, but just because the two of you decide doesn’t mean the decision is a good one.

We see this in Abraham and Sarah’s decision to have a child through Sarah’s servant Hagar.

Now Sarai, Abram’s wife, had borne him no children. But she had an Egyptian slave named Hagar; so she said to Abram, “The Lord has kept me from having children. Go, sleep with my slave; perhaps I can build a family through her.”

Abram agreed to what Sarai said.

As you probably know, their decision didn’t work out well. The Bible says “When she knew she was pregnant, she began to despise her mistress” (Genesis 16:4 NIV). Then, even though it was Sarah’s idea, she told Abraham “You are responsible for the wrong I am suffering. I put my slave in your arms, and now that she knows she is pregnant, she despises me. May the Lord judge between you and me” (Genesis 16:5 NIV).

Know When To Seek Advice

Aware that our collective judgment as married couples isn’t always enough, we should seek advice especially for big decisions. While there are marriage counselors and friends that may have been through similar that can advise us, as believers, we also have God who’s is just one prayer away!

When Abraham and Sarah decided to go through Hagar to have a child, they didn’t consult God. If they had, God may have told them earlier what he later told Abraham in Genesis 17:19.

“Yes, but your wife Sarah will bear you a son, and you will call him Isaac. I will establish my covenant with him as an everlasting covenant for his descendants after him.” Genesis 17:19 (NIV).

Ecclesiastes 4:9-12 speaks about how two are better than one, for example, “If either of them falls down, one can help the other up” (v. 10), or “if two lie down together, they will keep warm” (v. 11). But then in verse 12, it says “A cord of three strands is not quickly broken” (NIV). Deciding on things together as a married couple is great, but how much better would our decisions be if we sought Godly wisdom in addition!

So learning Abraham and Sarah’s remember that your collective judgment as a married couple isn’t always enough. Know when to seek advice, God is just a prayer away.

Make Sacrifices For The Sake of Peace

The last marriage lesson we’ll look at from Abraham and Sarah is to make sacrifices for the sake of peace. This lesson follows from their decision to have a child through Hagar and is a great example of what helps make marriages successful.

Abraham Sent Hagar and His Son Ishmael Away

As shared in the previous lesson, after not having a child for some time, Sarah approached Abraham about having a child through her servant Hagar. That decision led to trouble in their marriage and when Sarah finally had a child she didn’t like that Ishmael (Abraham’s son through Hagar) played with her son Isaac.  For this reason, Sarah told Abraham “Get rid of that slave woman and her son, for that woman’s son will never share in the inheritance with my son Isaac” (Genesis 21:10 NIV).

So Abraham found himself having to make a hard decision. The Bible says “The matter distressed Abraham greatly because it concerned his son” (Genesis 21:11 NIV). In the end, with God’s blessing, he did what Sarah asked. This teaches us that to have peace in our marriage we may have to make sacrifices.

In the case of Abraham and Sarah, Abraham had to make a big sacrifice for the sake of peace. But making sacrifices in a marriage doesn’t only apply to big things. As I started to outline this article my wife came in and started discussing chores. Although I was trying to focus on the article, I sacrificed some of the time I wanted to dedicate to writing to listen to what she had to say. This might same simple, but it’s these little sacrifices that add up leading to a happy marriage. On the other hand, neglecting to make them build up and lead to a failed one.

In your marriage, choose mutual happiness over individual happiness. To get anything good in life requires sacrifices. A happy marriage is no different. If God gave Abraham the green light on sending Hagar and Ishmael away because Sarah told him, making big and small sacrifices for the sake of peace in our marriage is something we can’t ignore.

Abraham and Sarah weren’t a perfect couple. Which couple was? Regardless, there were some marriage lessons we could learn from them. In this article, we looked at 3. The lessons were Take Your Spouse With You, Your Collective Judgement Isn’t Always Enough, and Make Sacrifices for The Sake of Peace. I hope these lessons help you build a successful marriage.

Related articles referenced in this article: