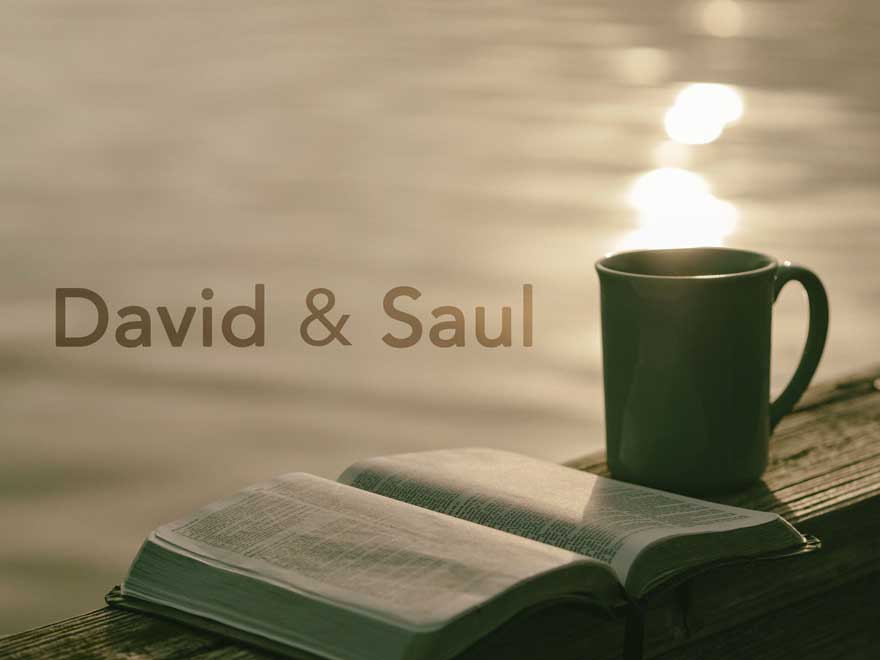 The story of David and Saul found in 1 Samuel has 3 life lessons worth pointing out. The lessons stem from Saul’s response to David when he asked him to fight Goliath, Saul’s reaction to David after he defeated Goliath, and David sparing Saul’s life twice even though Saul was trying to kill him.

People Will Doubt You But Don’t Give Up

The first lesson from David and Saul comes from 1 Samuel 17. It’s when David approached Saul for permission to fight Goliath. David was convinced that he had what it took to defeat Goliath but Saul doubted.

When David spoke to Saul after learning of Goliath, he told him “Let no one lose heart on account of this Philistine; your servant will go and fight him” (1 Samuel 17:32 NIV). David was prepared to fight Goliath but in response, Saul told him “You are not able to go out against this Philistine and fight him; you are only a young man, and he has been a warrior from his youth” (1 Samuel 17:32 NIV).

Saul didn’t think David had what it took. On the surface, David didn’t appear to be much and since Saul didn’t know David’s true experience and ability, Saul came to that conclusion.

People Don’t Know What You Know

If Saul knew the skills David possessed, he would have responded differently. In the following verses, David provides the basis for his belief in his ability to defeat Goliath then Saul said Go!

In the same way that Saul doubted David based on initial impressions, people will doubt you. When they doubt, realize that they are doubting because they don’t know what you know.

Just like David’s confidence stemmed from his experience protecting his father’s sheep from lions and bears, you have experience and skills that people can’t appreciate when they doubt you. With an inner knowing of what you are capable of, don’t let the doubts of others cause you to give up.

Even Goliath underestimated David. He asked David “Am I a dog, that you come at me with sticks?” (1 Samuel 17:43 NIV). As you know, David did defeat him proving he had what it took. So when others doubt you, don’t take it to heart. You know what you have within you. Prove them wrong.

Another lesson from David and Saul is to be content with what you have. After David killed Goliath, Saul became jealous and that unwarranted jealousy led him down the fruitless path of trying to kill David.

At the start of 1 Samuel 18, Saul appears to be pleased with David but something changed after he heard what the women sang concerning them both. After David killed Goliath, The women sang “Saul has slain his thousands, and David his tens of thousands” (1 Samuel 18:7 NIV).

The next verse goes on to say:

‘Saul was very angry; this refrain displeased him greatly. “They have credited David with tens of thousands,” he thought, “but me with only thousands. What more can he get but the kingdom?”

Saul had become jealous of David completely ignoring the fact that David was working for him. Jonathan, Saul’s son, was the opposite. The Bible says “Jonathan became one in spirit with David, and he loved him as himself” (1 Samuel 18:1 NIV). Jonathan even reminded Saul that David made him happy. He told Saul:

“Have you forgotten about the time he risked his life to kill the Philistine giant and how the Lord brought a great victory to all Israel as a result? You were certainly happy about it then”.

When We Become Jealous

Saul changing his attitude towards David is similar to how we may be happy but quickly become unhappy. For example, let’s say you got a new job and were satisfied with the pay. After a while, you discover that someone who was doing the same job as you was getting paid more. How would that make you feel?

It’s like the parable of the vineyard workers. Those that started work earlier got the same amount as those that started at the end of the day. Even though the initial workers agreed to what they received they were upset that the others got the same. Such jealous responses are unwarranted and can cause us to mess up a good thing.

Be content with what you have. Even if what you hear changes your emotions, don’t let it affect your actions. Saul didn’t control his emotions and it led him down an unfruitful path of trying to kill David. Let’s learn from him and be different.

The last lesson we’ll look at from David and Saul is don’t render evil for evil. As you probably know, The Bible teaches this lesson in multiple places. In the story of David and Saul, we see it in practice when David had multiple opportunities to kill Saul but didn’t.

On many occasions Saul pursued David to kill him. Despite knowing Saul’s intent, David refrained from killing him twice when he had the opportunity.

The first is told in 1 Samuel 24. After Saul learned where David was, he took three thousand men to get him. When Saul came to a cave to relieve himself, David was in the cave and his men said “This is the day the Lord spoke of when he said to you, ‘I will give your enemy into your hands for you to deal with as you wish’” (1 Samuel 24:4 NIV).

Even though killing Saul appeared justified, David said “The Lord forbid that I should do such a thing to my master, the Lord’s anointed, or lay my hand on him; for he is the anointed of the Lord” (1 Samuel 24:6 NIV).

The second time David didn’t take the opportunity was when Saul and his men were sleeping. David and one of his men entered Saul’s camp and met him sleeping with his sword next to his head. Abishai, who was with David was prepared to use Saul’s spear to kill him but David said:

“Don’t destroy him! Who can lay a hand on the Lord’s anointed and be guiltless? As surely as the Lord lives,” he said, “the Lord himself will strike him, or his time will come and he will die, or he will go into battle and perish.”

David’s secret for not rendering evil for evil was his fear of God. Each time he had the opportunity to kill Saul but didn’t, he mentioned the Lord. David understood that the Lord would deal with Saul and so he didn’t take matters into his own hands.

Just like David, we should fear God to the point where we trust him to do what He says He will do. The Bible teaches “Do not repay evil with evil or insult with insult. On the contrary, repay evil with blessing, because to this you were called so that you may inherit a blessing” (1 Peter 3:9 NIV).

Additionally, Paul said, “Do not take revenge, my dear friends, but leave room for God’s wrath, for it is written: “It is mine to avenge; I will repay,” says the Lord” (Romans 12:19 NIV).

It’s God’s responsibility to carry out justice. Just like David didn’t render evil for evil by sparing Saul’s life, let’s not take matters into our own hands and let God avenge.

The story of David and Saul was surely an adventure. What appeared to be the start of a promising relationship quickly deteriorated. In this article I shared three lessons from their story. Lesson 1: People will doubt you but don’t give up. Lesson 2: Be content with what you have. Lesson 3: Don’t render evil for evil. I hope you were blessed!

4 replies to 3 Life Lessons From David and Saul