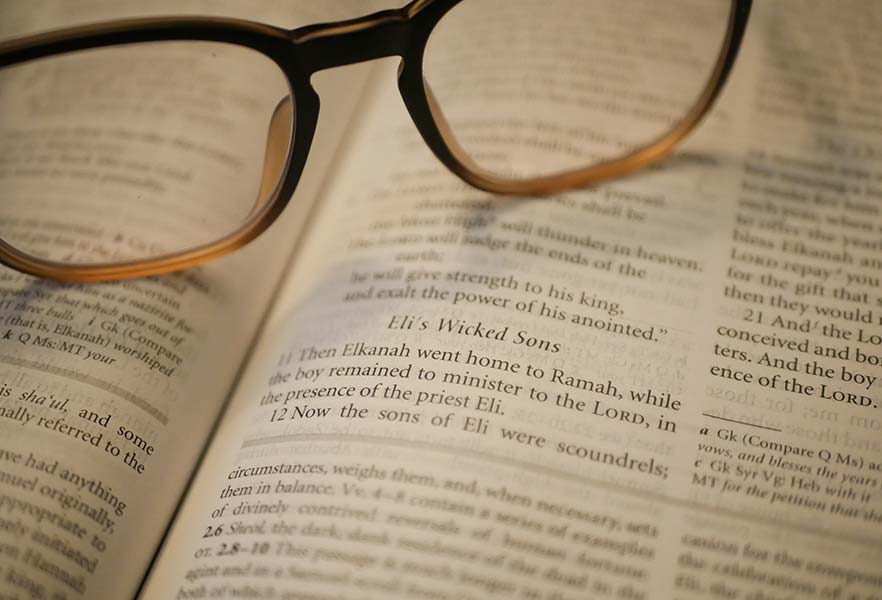 The story of Eli and his sons has a few lessons that will improve the way you view God, understand his promises, and live your life. If you are unfamiliar with the story, it’s found in 1 Samuel 2:12-36.

In summary, Eli and his sons were priests, but the sons were mistreating God’s people and sacrifices. Eli didn’t do enough to stop them resulting in them and their family line being punished.

The first lesson from the story of Eli and his sons is to fear God more than man. As you may know, “to fear” can mean different things, but in this context, I’m using it to mean respect or honor.  Eli’s response to the behavior of his sons showed that he feared them more than God. In turn, God’s response to Eli is a reminder that we should fear him most.

The Bible states that Eli “was aware of what his sons were doing to the people of Israel” (1 Samuel 2:22 NLT). That awareness appeared to be more than just a knowing but rather an acceptance. Why? God told Eli that he gave his sons more honor than Him even after he rebuked them.

Although his sons were the ones the story show were doing wrong, God told Eli:

“Why do you scorn my sacrifice and offering that I prescribed for my dwelling? Why do you honor your sons more than me by fattening yourselves on the choice parts of every offering made by my people Israel?”

The NLT translation explicitly says “you and they have become fat”. This shows that although Eli may have rebuked his sons, he didn’t take more substantial action to prevent their sin because he was also benefiting from what they did. God saw that as him honoring his sons more than Him.

Show That You Fear God More Than Man

Learning from God’s response to Eli, we should show a greater fear of God over men by going beyond passively rebuking sin. We should make every effort to make things right especially if those who are sinning are under our authority.

Often times we are afraid to stand up for what is right because we may be labeled as weird or left out of the group, but when we don’t we honor people more than God. Jesus said:

“Whoever is ashamed of me and my words, the Son of Man will be ashamed of them when he comes in his glory and in the glory of the Father and of the holy angels” (NIV).

So let’s not be like Eli who didn’t do more about his sons because he feared them more than God. Through our actions rather than words let’s show God that we respect him more.

In 1 Samuel 2:30, God acknowledged what he promised Eli then indicates that He’s making a change. He said, “I promised that your branch of the tribe of Levi would always be my priests. But I will honor those who honor me, and I will despise those who think lightly of me” (1 Samuel 2:30 NLT). God went on to revoke that promise saying:

“The time is coming when I will put an end to your family, so it will no longer serve as my priests. All the members of your family will die before their time. None will reach old age.”

God made it clear that it was something he promised Eli’s family line but He’s now changing His mind since they were taking Him lightly. God’s condition for honoring people was also made clear. He’ll only honor those that honor him. He also said that those that met the condition of thinking of Him lightly, will be despised by Him.

Other Examples of God’s Conditional Promises

The story of Eli and his sons isn’t the only story in The Bible that shows the conditional nature of God’s promises. Here are a few examples that reveal the same:

Check If You Are Meeting The Conditions

God made it so that many of His blessings abide by the law of cause and effect. If we are not seeing the effects of His promises in our lives we should check if we are meeting the conditions. Like the story of Eli and his sons point out that you must honor God first to be honored by Him, other scriptures reveal the requirements for receiving the other blessings He promised.

When God declared the punishment for the actions of Eli and his sons he said:

“The time is coming when I will put an end to your family, so it will no longer serve as my priests. All the members of your family will die before their time. None will reach old age.

You will watch with envy as I pour out prosperity on the people of Israel. But no members of your family will ever live out their days.

The few not cut off from serving at my altar will survive, but only so their eyes can go blind and their hearts break, and their children will die a violent death.”

Eli and his sons’ actions were so severe to God that the consequences went beyond them. Members of his family were going to be subject to punishments for things they did not do themselves.

It’s like how the entire human race was punished because of Adam’s sin in the beginning. Even though Adam did, according to Romans 5:19, Jesus’ actions made things right again.  It says:

Knowing this truth, unexplained blessings or curses in our lives may be caused by the actions of those that came before us. Based on the story of Eli and his sons, just like we can inherit a physical illness through genetics, it’s possible to inherit spiritual blessings or curses. While we may not know for sure if we are experiencing a generational blessing or curse, we can definitely live a righteous life in an effort to be a blessing to those that come after us.

The story of Eli and His sons reveals some interesting lessons about how God works. In this article, I shared 3. Those lessons exposed the importance of fearing God more than man, the conditional nature of God’s promises, and how God’s punishments can impact generations.