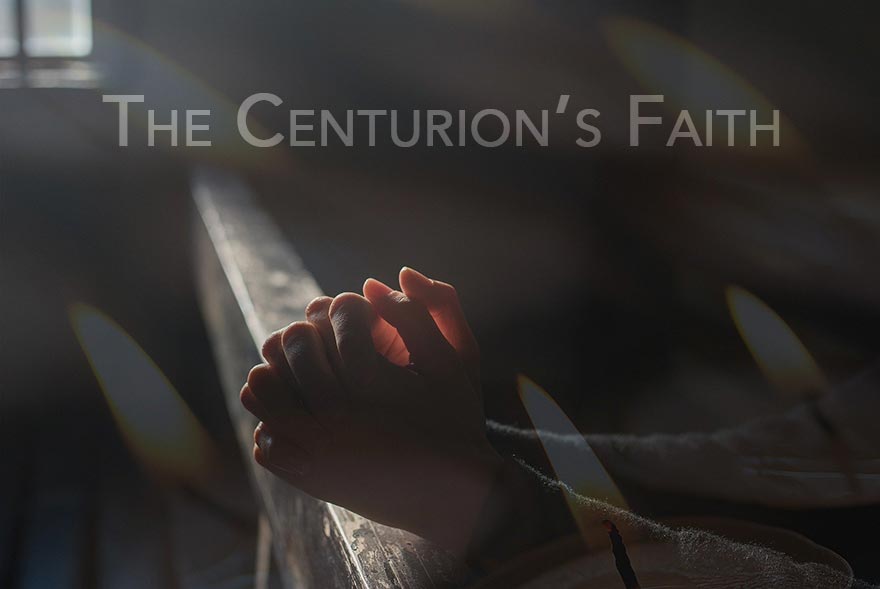 To have Jesus describe you as having great faith is a big deal. Throughout the gospels Jesus repeatedly tells his disciples they have little faith or they only need faith the size of a small seed to make big things happen.

So seeing Jesus describe a centurion’s faith as great faith that he hasn’t seen the likes of in all Israel stands out. In this article, I’ll summarize the story of The Centurion’s Faith and share 3 life lessons from it.

Summary of The Centurion’s Faith

The story of the centurion’s faith is found in Matthew 8:5-13 and Luke 7:1-10. In summary, a centurion had a valuable servant that was sick. After hearing about Jesus, he had elders ask him to heal his servant. As Jesus was on his way, the centurion told him to just say the word and his servant would be healed. Jesus commends his faith and at that moment his servant was healed.

The Lessons From The Centurion’s Faith

What we can learn from the centurion’s faith is that we should ask for help using wisdom, to build faith through understanding, and become a person of value.

The first lesson that stands out in the story of the centurion’s faith is to ask for help using wisdom. We can’t go far in life without asking for help. Furthermore, we should not only ask, but ask the right people, in the right way.

The Centurion Asked Jesus For Help

Matthew’s account of the centurion’s faith starts with him asking Jesus for help. It says “When Jesus had entered Capernaum, a centurion came to him, asking for help. “Lord,” he said, “my servant lies at home paralyzed, suffering terribly” (Matthew 8:5-6 NIV).

Luke’s account provides more detail surrounding the centurion’s request. It says “The centurion heard of Jesus and sent some elders of the Jews to him, asking him to come and heal his servant” (Luke 7:3 NIV).

The centurion approached Jesus because he had a problem and he knew Jesus had the power to solve it. That may sound straightforward, but many times we can find ourselves with a problem and we don’t ask for help. What’s more, if we do ask, we may ask people that can’t help us.

“Ask and it will be given to you; seek and you will find; knock and the door will be opened to you”

Think about it. Have you ever had a problem that you simply assumed was unique to you and so you didn’t bother asking anyone for help? Or have you had a problem and you asked inexperienced friends or family for suggestions? For example, without thinking about it, we can find ourselves consulting unhealthy people for health advice or broke people for money advice.

The centurion not only asked for help, but he asked someone who could actually help him. Like him, seek help and seek it from someone qualified to provide it.

The Centurion Asked Through The Elders

The centurion making his request through the elders of the Jews also teaches us to ask in the right way. As a none-Jew that considered himself undeserving of Jesus coming under his roof (Matthew 8:8), he understood that he had a better chance of Jesus helping him if Jews who were considered respected in the community asked on his behalf.

Similarly, the way you ask is also important. As insignificant as your tone may seem, it can make a difference. Asking when a person isn’t hungry or busy can change the outcome. And like the centurion likely realized, the reputation of the asker can work in your favor.

So when you have a problem, although it may seem like no one can help you, chances are someone can. Find and ask qualified people for help using wisdom.

Another lesson from the story of the centurion’s faith is to build faith through understanding. The centurion had an understanding of how authority worked and it led him to make a bold request of Jesus.

The Centurion’s Faith Was Based On Understanding

In the story, the centurion told Jesus “Lord, I do not deserve to have you come under my roof. But just say the word, and my servant will be healed” (Matthew 8:8 NIV). He went on to say:

The centurion was confident Jesus could heal his servant just by saying a word. That sort of confidence doesn’t come out of thin air. It comes from an understanding. The centurion had the experience that made him aware of Jesus’ ability to heal without coming to his servant. So naturally, understanding that it was an option, he confidently requested it.

Have you ever answered someone’s question immediately because you had an understanding of the subject? That’s the power of understanding. It doesn’t leave room for hesitance but rather it causes us to act confidently.

Such confidence is the essence of faith. The Bible defines faith as, “confidence in what we hope for and assurance about what we do not see” (Hebrews 11:1 NIV). With that definition in mind, we can see why Jesus commented on the centurion’s request saying “Truly I tell you, I have not found anyone in Israel with such great faith” (Matthew 8:10 NIV).

So to build faith, invest in understanding. Just like our understanding of a subject causes us to respond to questions confidently, understanding God’s word and how He works will make us confident in him. Like the centurion, when you encounter a situation that requires you to act in faith, you’ll be able to do so naturally because your actions will be supported by truths you understand.

Become A Person of Value

The story of the centurion’s faith also encourages us to become people of value. To be a person of value means that society finds the contributions you make valuable. As a result, people make sure you are cared for.

The Centurion Found His Servant Valuable

When his servant “was sick and about to die” (Luke 7:2 NIV), he sought a way to make his servant better.

“The centurion heard of Jesus and sent some elders of the Jews to him, asking him to come and heal his servant.”

It would be similar to a company. If your boss finds you valuable, he would do what it takes to keep you happy and employed. But if your boss doesn’t value you or sees you as a problem, he might be eager for an opportunity to let you go.

The Elders of The Jews Found The Centurion Valuable

The fact that the elders were willing to listen to and fulfill the request of this centurion shows that he was valuable to them. As you may know, a centurion is a Roman soldier in charge of 100 men and the Romans had conquered the Jews. So there had to be something different about this centurion that they were willing to help him. Luke 7:4 points out what it was.

“When they came to Jesus, they pleaded earnestly with him, “This man deserves to have you do this, because he loves our nation and has built our synagogue.”

To the elders of the Jews, the centurion deserved any help he could get because he did valuable things for them. He was not the typical Roman and the actions of the elders reflected that.

Be Valuable To Everyone

Learning from how the elders treated the centurion, don’t just be a person of value to some people, but to everyone. You never know who you’ll need to rely on in the future. This is the way God desires us to be. Jesus said:

Therefore, become a person of value. Not only does it pay to be one, but it is also what God desires.

The story of the centurion’s faith is unforgettable. It’s one of the few times that Jesus commends someone for having great faith. In this article, I shared 3 life lessons from the story. The lessons were to ask for help using wisdom, build faith through understanding, and become a person of value. I hope you were blessed!