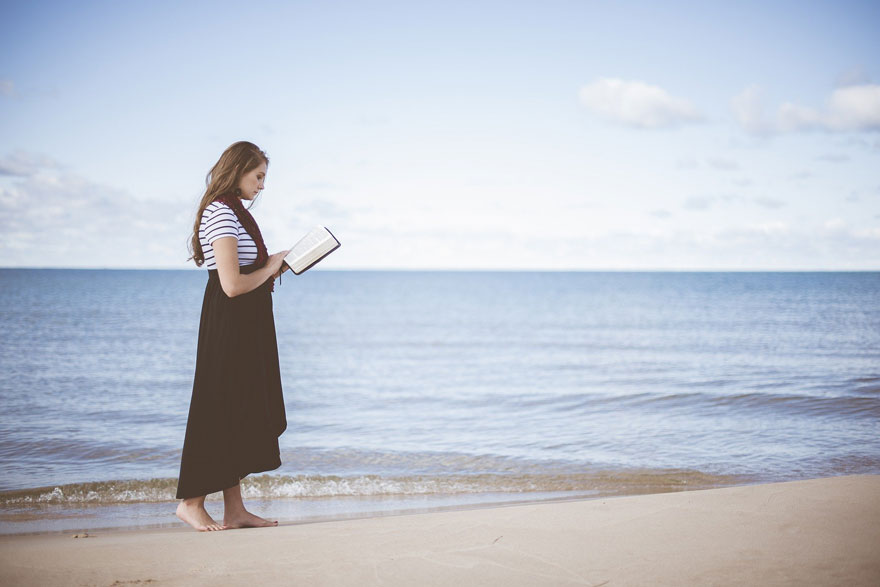 Oh how much better the world would be if more people were like Abigail. She is introduced as “intelligent and beautiful,” the soon-to-be king David praised God for her good judgment, and as you’ll see in this article, she possessed great character and wisdom.

Abigail’s story is found in 1 Samuel 25:2-42. In summary, she was the wife of Nabal, a wealthy man who was “mean in his dealings” (v. 3). David, before he was king, and his men used to protect Nabal’s servants and property, but when David asked him for help, he was selfish.

That made David angry and made him want to kill Nabal and every male in his household. Thankfully, Abigail was nothing like her husband. After hearing about the issue, she took action, and that action saved the men of her household.

So what are the 5 life lessons we can learn from Abigail?

Abigail shows us to be people that take action quickly, to humble ourselves when necessary, be knowledgeable, be approachable, and know when to speak to people.

Be A Person That Takes Action Quickly

Abigail Responded Quickly To The Situation

The first life lesson to learn from Abigail is to be a person that takes action quickly. In other words, don’t be a procrastinator. After the servant told Abigail what had happened between David’s messengers and Nabal, the servant said “think it over and see what you can do” (1 Samual 25:17 NIV).

But the next verse states that “Abigail acted quickly”. There was nothing to think over. The solution was obvious.

She took two hundred loaves of bread, two skins of wine, five dressed sheep, five seahs of roasted grain, a hundred cakes of raisins and two hundred cakes of pressed figs, and loaded them on donkeys. Then she told her servants, “Go on ahead; I’ll follow you…” But she did not tell her husband Nabal.

It was a good thing that Abigail acted quickly. The Bible states that while Abigail and her servants were on the way, they met David and his men coming toward them. Imagine what would have happened if she didn’t act quickly.

She may have decided what she was going to do, but the slightest procrastination in carrying it out could have caused David and his men to reach their home, giving her no chance of stopping them.

Her quick action in that instance wasn’t by chance. Abigail’s ability to take action quickly was a part of her character. In verse 23, when she saw David, The Bible states that she “quickly got off her donkey and bowed” (NIV).

At the end of the story, after Nabal died, David sent messengers to ask her to become his wife, and the Bible states that she “quickly got on a donkey and, attended by her five female servants, went with David’s messengers and became his wife” (1 Samuel 25:42 NIV). Taking action quickly was clearly how she operated.

Learning from Abigail, in life, we should develop the habit of taking action quickly. Of course, some things require thinking before acting, but in some situations like Abigail’s, when the answer is clear, we should not delay.

The timing of our actions can be the difference between life and death or missed opportunities and success. Don’t be a procrastinator, take action quickly when it makes sense.

Humble Yourself When Necessary

Abigail Humbled Herself Before David

The second life lesson to learn from Abigail is to humble yourself when necessary. The issue that David had with Nabal wasn’t Abigail’s fault, despite that The Bible indicates that when she saw David, she bowed down saying, “Pardon your servant” (1 Samuel 25:24 NIV).

Then after making her case, in verse 28 she says “Please forgive your servant’s presumption” (NIV). The statements that Abigail made show that she humbled herself before David in an effort to make peace with him.

Abigail’s humility eventually led David to change his mind about killing Nabal and all the men in his entire household. Did you get that? Although it was not her fault, her humility saved them! Abigail could have easily said “Nabal needs to deal with that. I’m tired of making excuses for him.” If she did, that attitude could have cost many innocent people their lives.

Likewise, in life, a problem may not always be your fault, but you may have to humble yourself to solve the problem. Having the attitude that the person that caused an issue should own up to it could cause you more than if you simply humbled yourself and took the issue on.

If you work in a store, that may mean mopping up a spill you met so that a customer doesn’t get hurt. Whereas ignoring it could lead to a lawsuit, ultimately causing you to lose your job.

In your relationships, it could look like apologizing for a miscommunication even though you felt like you communicated clearly to avoid a drawn-out argument. In whatever area of life it may be, learn from Abigail and humble yourself when necessary. In the grand scheme of things, it may be the smaller price to pay.

Abigail’s Knowledge of David Made A Difference

The third life lesson to learn from Abigail is to be knowledgeable. There is no doubt that Abigail was knowledgeable. After all, The Bible explicitly described her as intelligent (1 Samuel 25:3). Her knowledge stood out when she approached David.

Unlike her husband who arrogantly asked “Who is this David? Who is this son of Jesse?” (v. 10), Abigail knew who David was. That knowledge enabled her to persuade David through statements like:

Because of her knowledge of who David was, she was able to say very specific things that mattered to him, ultimately causing him to cool down and change his mind.

Like Abigail, we too should become knowledgeable, as it can also help us solve our problems. The more we know, the more solutions we have to choose from when issues arise. The key is to learn as much as you can so you can be as prepared as you can for whatever comes.

Surely if Nabal knew what Abigail knew about David, he would have responded to the messengers who came in David’s name differently. Instead, that lack of knowledge got him into trouble.

The fourth life lesson to learn from Abigail is to be approachable. What does it mean to be approachable? It means to be the type of person that is open-minded and willing to listen to the advice of others. Being approachable doesn’t keep people back from telling you things that can help you in the long run.

Abigail was approachable in that the servant was comfortable going to her to explain the potential disaster that was about to take place. In contrast, Nabal was not approachable. The same servant that spoke to Abigail said he is “a wicked man that no one can talk to him” (1 Samuel 25:17 NIV).

Abigail’s approachability ultimately saved lives. After Nabal, she was likely the only person in the household that had the power to do something about the situation and if she was anything like her husband, the servant may have avoided talking to her.

Imagine how many opportunities that are missed by people who aren’t approachable. I for one remember holding back gifts because the person it was meant for had a negative attitude when I got to them. That said, I probably missed out on many gifts myself!

But beyond fluctuating emotion, you can be known as an approachable person or a person that’s hard to get along with. Being approachable, like Abigail, allows others to quickly come to you with information that can possibly save your life.

Speak To People At The Right Time

Abigail Spoke To Nabal When He Was Sober

The last life lesson to learn from Abigail is to speak to people at the right time. There is a subtle detail that was included in Abigail’s story that teaches this. When Abigail came back from meeting David, The Bible states that when she went to Nabal, “he was in the house holding a banquet like that of a king.

He was in high spirits and very drunk. So she told him nothing at all until daybreak. Then in the morning, when Nabal was sober, his wife told him all these things…” (1 Samuel 25:36-37 NIV).

You may argue that it was obviously not a good time for Abigail to speak to Nabal while he was drunk and you would be making a reasonable argument. But since The Bible includes that detail, we’ll learn from it. In life, there are times when it’s not obvious that it’s not a good time to bring up an issue.

A person may not be drunk, but in the same way that a person is out of their right mind when drunk, they may be angry, hungry, or distracted. If you decide to speak about certain issues at such times, it may not be received well.

In the workplace, this could mean scheduling a meeting with your boss to discuss a concern rather than surprise them with it in the hallway. In a marriage, this could mean making sure your spouse had something to eat before correcting them on a fault.

If you got some good news personally, sharing it with others when they are upset will not be received the same as when they are in good spirits. As Abigail illustrated, in life, it’s important to speak to people at the right time. It makes a difference.

Abigail’s story was worth adding to The Bible. She is a great example of good character and acting in wisdom. It is my prayer that you take these 5 lessons from her and apply them to your life. Your life will be better by doing so.

22 replies to 5 Life Lessons From Abigail: Characteristics We All Should Have