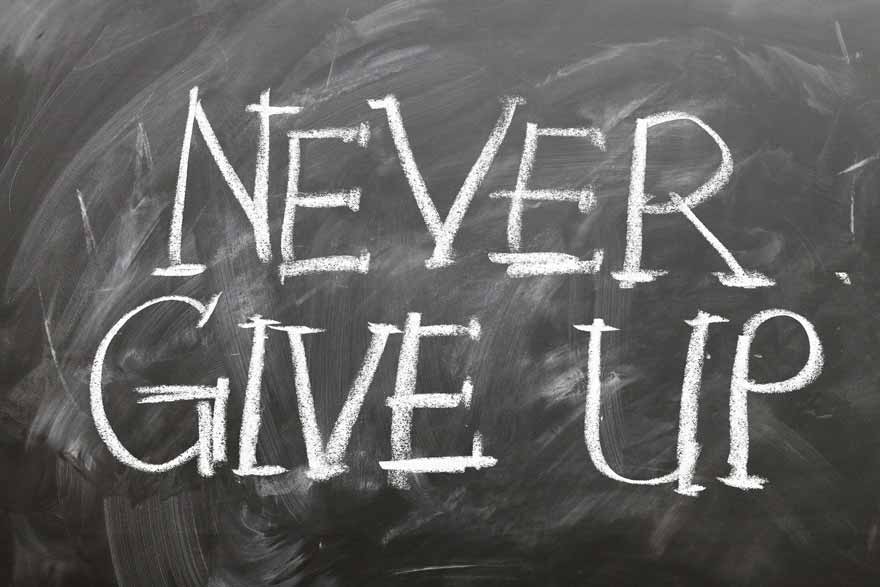 You probably already know that a key difference between people that achieve their goals and those that do not is their level of persistence. Persistence, which is often linked with perseverance, is without a doubt a necessary characteristic we need to be successful in life.

In this article, I’ll share 4 biblical examples of persistence we can learn from. The examples are The Persistent Widow, The Woman With The Issue of Blood, Bartimaeus, and The Canaanite Woman. I hope these examples inspire you to never give up no matter what your goal is in life.

The Persistent Widow Kept Asking Until She Got Justice

In the parable, a widow persistently requested justice from a judge that was indifferent. “Grant me justice against my adversary” she would continually plead (v. 3 NIV) but he would ignore her. Eventually, the judge said to himself that he would grant the request so that she would not wear him out.

The word Justice indicates that she had a right to what she was asking for. It wasn’t a favor, but rather it was based on the knowledge of what she knew was rightfully hers. I expand on this in my article 4 Lessons To Learn From The Parable of the Persistent Widow, but basically when we know the facts about what’s possible it gives us confidence which translates to persistence.

So whatever your goal is, if you can convince yourself that you deserve it, that can ignite a drive in you to persist. This reminds me of the burst of persistence I once developed when I was denied a government scholarship. I knew I was more qualified than the average candidate, so when I was told no, I walked up to the lady in charge and pleaded my case.

As it turned out, a misunderstanding caused me to miss out on the initial approval and after some clarification, she approved me on the spot. Imagine if I had accepted the initial denial and walked away!

The Woman With The Issue Blood Pressed Through The Crowd

The next example of persistence in The Bible is the Woman With The Issue of Blood. As one of the most popular women of The Bible, there is a good chance you are familiar with her story. If not, it’s found in all three gospels; Matthew 9:20-22, Mark 5:24-34, and Luke 8:43-48.

I consider the woman with the issue of blood an example of persistence because she had a bleeding issue for 12 years and “she had suffered a great deal under the care of many doctors and had spent all she had, yet instead of getting better she grew worse” (Mark 5:26 NIV). Continually trying to get better for 12 years is without a doubt persistence. Many people would have given up in a fraction of that time.

She not only persisted in trying to find the right doctor despite getting worse after each one but also when she reached out to touch Jesus. Pushing through the dense crowd, she said to herself “If I only touch his cloak, I will be healed” (Matt. 9:21 NIV).

She is a great example of doing all you can to get what you desire. Just like she heard about Jesus she likely heard about the doctors that weren’t able to help her. If she had given up after the first set of doctors made her worse, she may have not tried when Jesus came around.

The next biblical example of persistence we’ll look at is Bartimaeus. Bartimaeus was persistent in that he didn’t let the crowd keep him from getting Jesus’ attention for healing.

If you are unfamiliar with Bartimaeus. His story can be found in Mark 10:46-52. He was a blind beggar that heard Jesus was passing by. With a clear understanding of who Jesus was and what he could do for him, he began to shout “Jesus, Son of David, have mercy on me!” (v. 47). Mark 10:48 goes on to say ‘Many rebuked him and told him to be quiet, but he shouted all the more, “Son of David, have mercy on me!” (NIV).

Bartimaeus shouting all the more when the people tried to silence him is a great example of persistence. If anything, it was persistence 2.0 because he did what he was doing even more than before after facing opposition. As a result of his persistence, he got Jesus’ attention and was healed.

Learning from Bartimaeus’ example of persistence, we should not let people keep us back when we have a goal. When we are certain of what we want to achieve in life, like Bartimaeus, we should push even harder when we face opposition. Some criticism may be worth paying attention to. Hear those and be cautious if necessary. But don’t let baseless critiques keep you back. Use them as fuel to go harder.

The last biblical example of persistence I’ll share is the Canaanite Woman. In asking Jesus for her demon-possessed daughter’s healing she refused to take no for an answer. In the end, her persistence got her what she wanted.

The story of the Canaanite woman can be found in Matthew 15:21-28. While Jesus was in the region of Tyre and Sidon, a Canaanite woman came crying out “Lord, Son of David, have mercy on me! My daughter is demon-possessed and suffering terribly” (v. 22). In response, Jesus implied that the answer was No because she was a Canaanite. Despite that, the Canaanite Woman persisted with further pleading.

After Jesus made another statement that suggested that he wouldn’t heal her daughter, the Canaanite woman didn’t give up. Jesus told her “It is not right to take the children’s bread and toss it to the dogs” (v. 26). In response, the Canaanite Woman said “Even the dogs eat the crumbs that fall from their master’s table” (v. 27). That last statement she made was the key that unlocked the door. In awe of her great faith, Jesus granted her request.

So what can we learn from the Canaanite’s Woman example of persistence? We can learn that “No” doesn’t necessarily mean no. If we persist and make the right argument, No can become yes. This takes me back to a time when I listened to a podcast about business start-ups. I was amazed at how almost all of the founders were told no in the beginning. But like the Canaanite woman, they persisted and later became successful. So don’t let a “no” stop you. Keep going!

So there you go. 4 biblical examples of persistence to learn from. The Persistent Widow shows that a sense of deservingness can help us to persist. The Woman With The Issue of Blood reminds us that success can be one step away. Bartimaeus’ example teaches us to push even harder when we face opposition. And The Canaanite Woman encourages us to not take no for an answer.

Filed Under: Learn By Example, Lessons Tagged With: Blind Bartimaeus, The Canaanite Woman, The Persistent Widow, Woman With The Issue of Blood