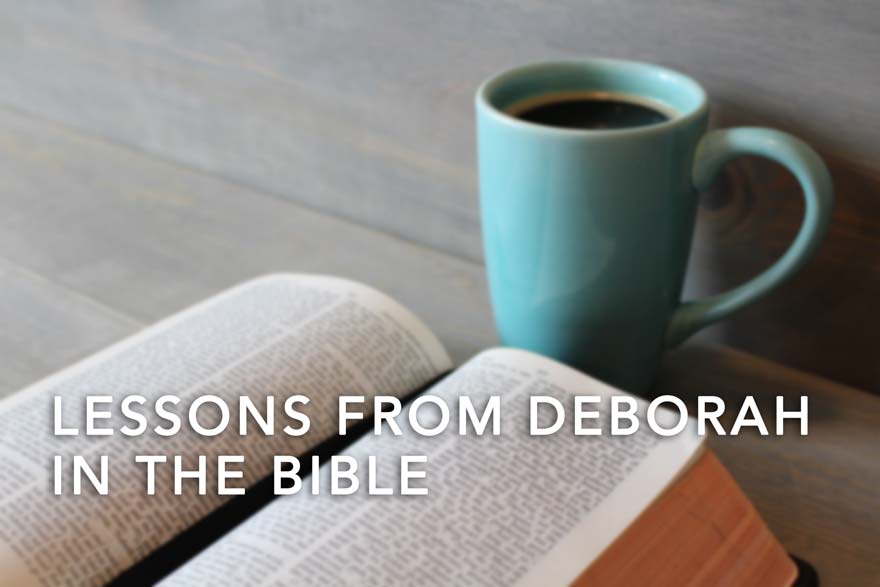 Who wouldn’t be inspired by judge Deborah? Her story found in Judges 4-5 shows courage, limitless possibilities, and humility. In this article we’ll look at 3 life lessons we can learn from her. But first, if you are unfamiliar with her story, here’s a quick summary.

After the Israelites did evil in God’s sight, were captured by foreign nations, and led back to God multiple times, God raised up Deborah to lead them once again. Unlike the judges before and after her, Deborah is special in that she was the only female judge over Israel. Described as a prophet and a wife, Deborah transferred God’s message to Barak to lead the defeat of commander Sisera and king Jabin’s army and had the courage to go with him.

After king Jabin’s entire army was killed and their commander Sisera was murdered by Jael (another woman), Deborah retells the entire experience through a song sang by her and Barak in Judges 5.

So what can you learn from Deborah? From Deborah, you can learn to take action, that you can be the first, and to work with others. Let’s look at each of these life lessons in more detail.

The first life lesson to learn from Deborah is to take action. The Israelites are known for keeping detailed records of their history. You may have noticed this from the detailed genealogies listed in some of the books of The Bible. With historical records likely available to Deborah, she would have known that the Israelites weren’t loyal to God.

Before Deborah, each time God raised up a judge to rescue the Israelites from their troubles, they would forget and find themselves back under the rule of another nation time and time again. Despite their unloyal history, Deborah took multiple actions that ultimately led to the Israelites being released from their oppression.

“She sent for Barak son of Abinoam from Kedesh in Naphtali and said to him, “The Lord, the God of Israel, commands you: ‘Go, take with you ten thousand men of Naphtali and Zebulun and lead them up to Mount Tabor. I will lead Sisera, the commander of Jabin’s army, with his chariots and his troops to the Kishon River and give him into your hands.’”

Although Judges 4:6-7 marks a specific point in which Deborah took action, she must have been taking action many times before. The Bible says “She held court under the Palm of Deborah between Ramah and Bethel in the hill country of Ephraim, and the Israelites went up to her to have their disputes decided” (Judges 4:5 NIV). To get to that point she had to take action when she heard God calling her to be a judge.

Similarly, when Barak said he would only go as the Lord commanded him if Deborah went with him, she didn’t hesitate.

“Certainly I will go with you,” said Deborah.

Learning from Deborah, take action when God leads you to. Just like Deborah didn’t let the negative past influence her decision, don’t question God’s calling because it doesn’t make sense based on history. Whatever it may be. Whether it’s giving a gift, speaking to someone, or starting a ministry/business, trust God and take action like Deborah did. The action Deborah took led to the land having peace for 40 years. Who knows what will be the result of the action you take?

You Can Be The First

The next life lesson to learn from Deborah is that you can be the first. One of the characteristics of Deborah that makes her so popular is that she was the first female judge in Israel. Imagine what it must have been like for her to hear God’s calling to fill that rule when there weren’t any females before her that did!

What’s more, The Bible says Deborah was “the wife of Lappidoth” (Judges 4:4 NIV), indicating that she held her role while being married. This is significant in a world where some women find themselves choosing between achieving greatness and having a family.

So building off of the first lesson, take action even if it means that you’d be the first. God is depending on you. As God did through many bible characters, he may want to do something great through you.

Deborah Didn’t Try To Do It All

The last life lesson to learn from Deborah is to work with others. As the current judge over Israel Deborah didn’t let her position cause her to think she was supposed to do everything for them. Rather than questioning God and desiring to play a more significant role in freeing the Israelites, she delivered the message to Barak as given (Judges 4:6-7).

Further showing her willingness to work with others, she agreed to go with Barak when he appeared to lack confidence.

“Certainly I will go with you,” said Deborah…

We can easily become prideful when sitting in a position like Deborah’s. Because we may have heard God’s calling to lead, we may feel like we are the ones to do everything. This was a mistake Moses made before his father-in-law Jethro advised him. He used to spend the entire day serving as a judge for all of the Israelites no matter the issue. But after Jethro advised him, he shared the workload.

Later in Judges chapter 5, we see the cooperation continue. Although it is called the song of Deborah, Judges 5:1 says “On that day Deborah and Barak son of Abinoam sang” (NIV).

Deborah’s story beginning in Judges 4 is historic. From Deborah, we learned to:

Take action – ignore the past, you never know what important outcome God may need you to bring about. You can be the first – if your goal will make you the first, don’t reason that it’s impossible because no one has done it before, Deborah like so many throughout history became a first, so can you. Work with others – just because God may have called you, doesn’t mean you were meant to do it alone. Remain humble and open to God’s leading for the help of others.

Articles on life lessons from other women in the old testament: