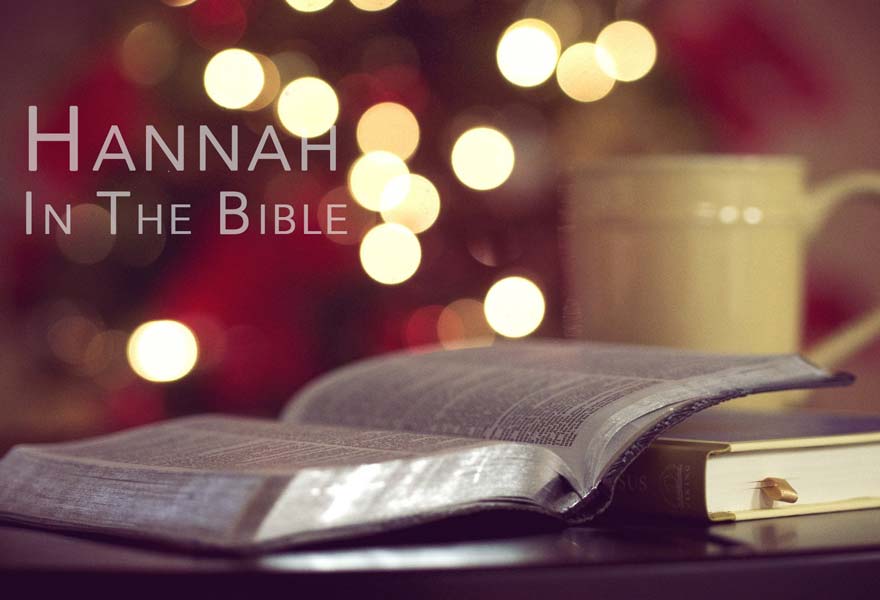 Hannah is one of the many women in The Bible who had difficulties having a child but later did. In addition to the lessons of the power of prayer and faith that we can learn from her story, there are 3 life lessons.

The life lessons we can learn from Hannah are to keep your promises, things aren’t always what they seem, and speaking your heart makes you feel better.

If you are unfamiliar with Hannah’s story, it’s found in 1 Samuel 1 and flows into 1 Samuel 2, but here is a quick summary. Hannah was one of her husband Elkanah’s two wives. Each year they all would travel to make sacrifices and worship God. Since Hannah could not have children, her husband’s other wife Peninnah would taunt and make fun of her. Eventually, all that Hannah went through led her to ask God for a son promising to give that son back to him for the rest of his life if He granted the request.

Eli, the priest, walked in on Hannah praying and accused her of being drunk because her lips were moving but she could not be heard. Hannah quickly corrects him, he offers some encouraging words, and then she left his presence feeling better. In time, she does give birth to a son and after weaning him, she dedicates him back to the Lord as she promised she would.

Let’s now look at each of the life lessons from Hannah in more detail.

The life lesson that stands out most from Hannah is to keep your promises. Hannah made a promise to God that if he gave her a child she would dedicate him back to God for the rest of his life. Even though some time had passed and she may have fallen in love with the child, she remembered her promise and followed through.

For believers and non-believers alike, keeping promises is a big deal. Has anyone ever made a promise to you but didn’t keep it? For small things, it may be a minor annoyance, but for big things, it can be heartbreaking! Knowing how an unkept promise makes us feel, we should do our best to keep our promises to others.

Keep Your Promises To God

Hannah didn’t just keep a promise, she kept a promise to God. Oftentimes, because God is unseen, we may neglect the promises we make to him but keep the promises we make to people. We may promise to spend time with him but let commitments made to people get in the way. Like Hannah, in our distress, we may promise God to do things to get him to grant us our desires, but after receiving it we forget.

Making a promise and not keeping is basically lying. So if we make a promise to God and not keep it we are lying to God! Realizing this, Hannah likely did her very best to follow through on what she promised God. Imagine how hard it would have been to give up your only child after waiting so long. No wonder Hannah’s husband Elkanah told her “may the Lord help you keep your promise” (1 Samuel 1:23 NLT).

Better To Not Make Promises

Since promises are a big deal, it’s probably better to avoid making them as much a possible. Ecclesiastes 5:5-6 says

It is better not to make a vow than to make one and not fulfill it. Do not let your mouth lead you into sin. And do not protest to the temple messenger, “My vow was a mistake.” Why should God be angry at what you say and destroy the work of your hands?

This verse indicates that God doesn’t ignore unkept promises. He actually gets angry and it ends up hurting us.

Hannah Was Blessed After Keeping Her Promise

On the other hand, when we keep our promises no matter how hard it is, we can be sure God notices as well. Following Hannah’s kept promise to God, 1 Samuel 2:21 says “And the Lord blessed Hannah, and she conceived and gave birth to three sons and two daughters” (NLT).

So that’s the first life lesson to learn from Hannah. Keep your promises. To both God and man, it’s a big deal to do so. If anything, avoid making promises altogether. It’s better to not make any promises than to make a promise and not keep it.

The second life lesson we can learn from the story of Hannah is things aren’t always what they seem. When Hannah was praying, The Bible says “her lips were moving but her voice was not heard” (1 Samuel 1:13 NIV). So when Eli, the priest, saw her he accused her of being drunk saying “how long are you going to stay drunk? Put away your wine” (1 Samuel 1:14 NIV).

It is unlikely that Eli was being rude to Hannah when he made his comment, but he was surely wrong with his assumptions. Hannah quickly clarified what she was doing telling him “I am a woman who is deeply troubled. I have not been drinking wine or beer; I was pouring out my soul to the Lord. Do not take your servant for a wicked woman; I have been praying here out of my great anguish and grief” (1 Samuel 1:15-16 NIV). Hannah replied to Eli’s misunderstanding gracefully, but sometimes in life that doesn’t happen.

Assumptions Can Lead To Problems

When Eli thought Hannah was drunk, she was in a weak position emotionally. The Bible says “In her deep anguish Hannah prayed to the Lord, weeping bitterly” (1 Samuel 10 NIV). In that state, what Eli told Hannah could have placed her in a worse position, potentially leading her to her breaking point. After all, Hannah was placed in that state because Elkanah’s other wife Peninnah routinely provoked her to irritate her.

When we see things it’s natural to draw conclusions. But while we may not be able to prevent ourselves from doing so, we must remember that things aren’t always what they seem. Knowing this keeps us from incorrectly saying or doing the wrong thing in response.

Proverbs 25:7-8 highlights this saying “What you have seen with your eyes do not bring hastily to court, for what will you do in the end if your neighbor puts you to shame?” (NIV) Without a doubt, we are embarrassed when we take action on a false assumption.

Therefore, in life, whenever you feel the urge to say or do something because of something you think you saw, remember that Hannah appeared to be drunk by Eli, but was actually praying in deep anguish. Take the safe route and give people the benefit of the doubt because things aren’t always what they seem.

Another life lesson the Hannah story teaches is speaking your heart makes you feel better. Whether it’s talking to God through prayer or to a person, both seem to help us feel better.

In 1 Samuel 10, we see Hannah in deep anguish praying to God and weeping bitterly. Then in 1 Samuel 18 she excitedly thanked Eli and “went back and began to eat again, and she was no longer sad” (NLT). What happened in between those two verses that made the difference? Hannah prayed to ask God for a son and she told Eli a little bit of what she was going through. Eli also told her “go in peace! May the God of Israel grant the request you have asked of him” (1 Samuel 1:17 NLT).

We could argue that it was Eli’s statement that made her feel better, but that was only in response to her first praying and then telling him what she was doing. What appears to have made the difference is that she got her thoughts out of her heart.

Get Things Off Your Chest

It’s amazing the difference it makes when we put into words what’s in our hearts. Whether it’s through prayer, talking to others, or writing it down, it gives us a release. Learning this has improved my relationships greatly.

Once in my marriage, my wife was upset about the way I handled a situation. I on the other hand didn’t see anything wrong with what I did. Sensing the tension between us, I pulled her aside and asked her to tell me how she was feeling. After letting her speak for a few minutes uninterrupted, I told her I understood. Right after, she told me that she felt better.

Have you ever experienced something similar? Like Hannah, maybe you were in anguish over something and while the situation wasn’t resolved, just praying about it made you feel at ease. Or maybe it wasn’t a problem, you simply got to share your deep thoughts or interest with someone and it left you exhilarated!

Perhaps the most memorable thing about Hannah is her prayer life. Learning from her, whenever you are in a low place emotionally, talk to God, someone or just write how you are feeling down. Speaking your heart will undoubtedly make you feel better.

Hannah was truly a strong, faithful, and praying woman and there are many lessons we can learn from her. In this article, we looked at 3 life lessons from her story. The lessons are to keep your promises, things aren’t always what they seem, and speaking your heart makes you feel better. May you find ways to apply them in your day-to-day life!