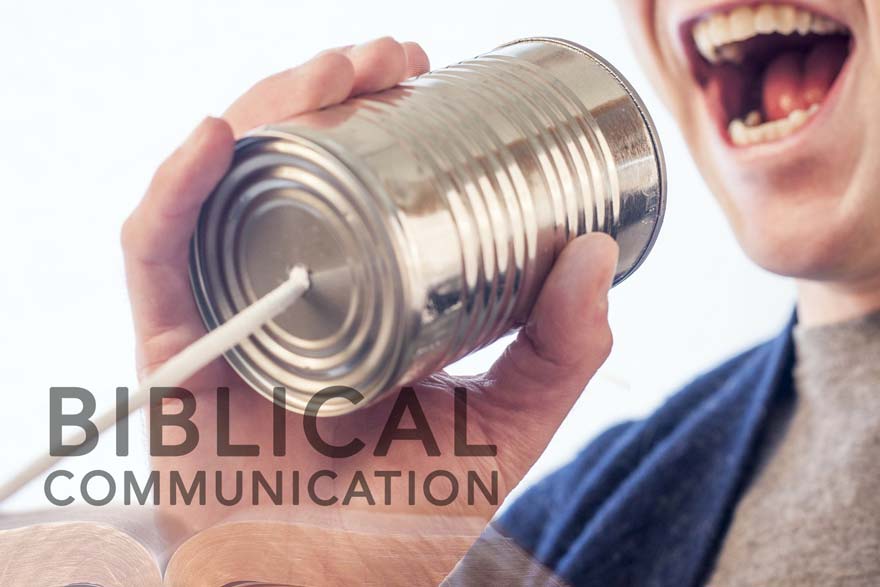 Communication is an essential part of life. Without it, no society would survive. The Bible, which points to the meaning of life has a lot to say about communication. Based on what it says, there are 5 lessons we can learn.

The 5 biblical lessons on communication are:

In this article, I’ll go into detail on each of these lessons. For 3 of them, I go into more detail and provide examples in my article How To Communicate According To The Bible. I’ll refer to it under those lessons throughout this article.

The first lesson The Bible teaches on communication is to communicate the truth. In other words, don’t lie. This lesson may seem obvious to most people, but if we take a closer look at the things we say, we may discover that we aren’t always truthful.

Before I expand on that, let me point out a couple of verses in The Bible that state we should communicate the truth. One of the Ten Commandments says “You shall not give false testimony against your neighbor” (‭‭Exodus‬ ‭20:16‬ ‭NIV‬‬) and ‭‭Proverbs‬ ‭12:22‬ says “The Lord detests lying lips, but he delights in people who are trustworthy” (NIV).

So what do I mean that if we were to take a closer look at the things we say we may discover that we aren’t always truthful? Think about it, have you ever exaggerated the truth? We can find ourselves doing so whenever we want to make a good impression or persuade others.

When asked about our work experience in an interview we may make it seem as though we took on more responsibility than we did. When sharing a story, we may express details in a way that amplifies what really happened. Such exaggerations aren’t truthful and they put people on guard when they discover that we exaggerate when we speak.

So lesson number one on biblical communication is to communicate the truth. Although it may seem obvious, remember that exaggerations are also a form of lying.

Understand Before You Speak

Taking the time to understand before you speak is the second lesson we can learn from The Bible regarding communication. To understand someone requires actively listening to them and as you probably know, that’s not easy to do.

Regardless of its difficulty, it’s the wise thing to do when we communicate. According to Proverbs 18:2, “fools find no pleasure in understanding but delight in airing their own opinions” (NIV). We behave foolishly when we don’t take the time to understand. I once heard someone say that if you are thinking of what to say while someone is speaking you’re not truly listening. How often have you done that? I have too many times.

Interrupting People When They Are Speaking

Perhaps the only thing worst than thinking about what you are going to say while someone is speaking is interrupting them to say what you have to say. Proverbs 18:13 condemns this saying “To answer before listening—that is folly and shame” (NIV). As you know, it’s annoying being interrupted by someone when you’re trying to make a point. Let’s not do it to others.

See my article How To Communicate According To The Bible for techniques on how to listen and understand others before speaking.

Speak As Little As Possible

Another lesson on communication from The Bible is to say as little as possible. Here are a few verses that teach this:

For some of us, this may be a hard one to accept. After all, when we speak we get to show people how intelligent we are. Right? Well, although it may make us feel good, it’s part of the reason why talking too much is a problem. Think about a time you were speaking with someone that dominated the conversation. How did it make you feel? It’s the same way we’ll make others feel if we do it. Not surprisingly, this lesson goes hand in hand with the golden rule. Matthew 7:12 – “do to others what you would have them do to you” (NIV).

On the other hand, speaking as little as possible creates more opportunities to learn. Dalai Lama once said, “When you talk, you are only repeating what you already know. But if you listen, you may learn something new”. It’s probably why James 1:19 combined being slow to speak with being quick to listen.

So lesson number three on biblical communication is to speak as little as possible. It makes you selfless, allowing others to speak giving you an opportunity to learn something new.

Taking the previous lesson one step further, the next lesson on communication from the Bible is to not say anything. According to The Bible, this is often necessary especially when we are angry.

Don’t Say Anything When You Are Angry

Think about a time you were angry and said certain things you regretted. The book of Proverbs teaches that it is foolish to do so saying “Fools give full vent to their rage, but the wise bring calm in the end” (Proverbs 29:11). Given the high probability of saying the wrong thing when you’re angry, it’s best to not say anything at all to avoid it.

In other situations, we may have an urge to speak only to end up making a promise we can’t keep. In Matthew 5 Jesus told the people that they have heard that they should not break their vows, but Jesus told them “But I say, do not make any vows!” (Matthew 5:34 NIV). Making a promise requires opening your mouth. So one way to guarantee we don’t make any is to keep quiet.

Don’t Speak On Subjects You Don’t Know Anything About

Another instance where The Bible indicates it’s best to not say anything is when you don’t know much about a subject. Proverbs 17:28 says “Even fools are thought wise if they keep silent, and discerning if they hold their tongues” (NIV). Sometimes we make ourselves look bad in an attempt to appear smart when we speak on subjects we don’t know much about. Keeping quiet in such instances not only protects us from embarrassment but may actually make us seem knowledgeable.

So lesson number four on biblical communication is to not say anything. For at least the three reasons I shared, we shouldn’t talk if we don’t have to.

See more details on these 3 reasons in my article How To Communicate According To The Bible.

The last lesson we’ll look at on biblical communication is to speak in a respectful way. If we’re not careful, we can find ourselves continually negative in the way we speak to others. This is usually when we bring other people down when we speak.

Has anyone ever made a comment that hurt your feelings? Even when our friends make jokes at our expense it could leave us feeling bad for a moment. Bringing people down by the things we say is directly prohibited in The Bible. Ephesians 4:29 says “Do not let any unwholesome talk come out of your mouths, but only what is helpful for building others up according to their needs, that it may benefit those who listen” (NIV).

According to Ephesians 4:29, when we communicate, we should only say things that are helpful. Our words should build up others. Proverbs 11:12 speaks to this issue as well. It says “It is foolish to belittle one’s neighbor; a sensible person keeps quiet” (NLT).

Sometimes we have to correct someone because they made a mistake. Such corrections according to The Bible should also be done respectfully. Galatians 6:1 says “Dear brothers and sisters, if another believer is overcome by some sin, you who are godly should gently and humbly help that person back onto the right path…”(NLT).

One verse that could summarize this entire lesson on communication is Colossians 4:6. It says “Let your conversation be always full of grace, seasoned with salt, so that you may know how to answer everyone” (NIV). To have conversations that are full of grace requires us to be constantly on guard when we talk. By incorporating the other lessons such as being slow to speak and understanding before speaking, we are more likely to speak in a respectful way whenever we open our mouths.

See my article How To Communicate According To The Bible for more details and examples.

As stated at the beginning of this article, communication is an essential part of life. No wonder The Bible has so much to say about it. In this article, I shared 5 lessons on biblical communication. You learned that you should communicate the truth, understand before you speak, speak as little as possible or not at all in some cases, and speak respectfully.