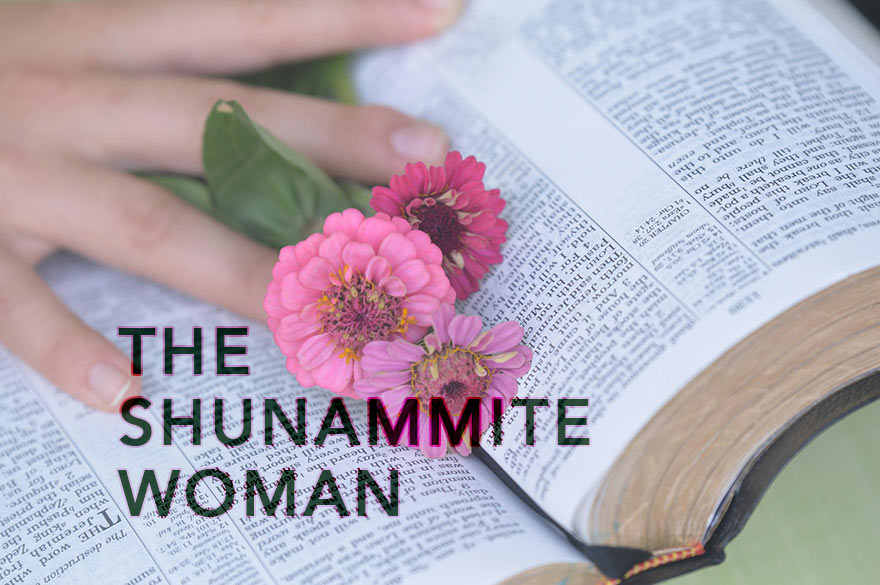 There are many women referenced throughout The Bible that are great examples of the characteristics all believers should have. One in particular is the Shunammite woman. Her story is found in 2 Kings 4 and 8. In summary, she was a woman that showed Elisha hospitality then got blessed with a son and life saving instructions.

In this article, I’ll go into detail on these three life lessons from her story:

Use What You Have To Be A Blessing

One of the first lessons that stand out about the Shunammite woman is that she used what she had to be a blessing. At first, it was simply a meal that she urged Elisha to stay and have when she met him in her hometown.

“She said to her husband, “I know that this man who often comes our way is a holy man of God. Let’s make a small room on the roof and put in it a bed and a table, a chair and a lamp for him. Then he can stay there whenever he comes to us.

The Shunammite Woman Did What She Could

The Shunammite woman didn’t shy away from doing all that she could for Elisha. As a “well-to-do” woman, it meant that she had more than adequate financial resources. And so her sharing with Elisha is a reminder that we should use our resources to be a blessing to others.

Use What You Have Even Though It’s Small

While most people wouldn’t be able to build a room for a prophet, God sees what we have and recognizes what we give accordingly. Pointing out the impact of what we consider to be small gift, Jesus said:

“And if you give even a cup of cold water to one of the least of my followers, you will surely be rewarded.”

Use whatever resources you have to be a blessing to others. Just like the Shunammite woman later expereinced, it may return a bigger blessing to you.

Be Satisfied With What You Have

The second lesson from the Shunammite woman is to be satisfied with what you have. Although Elisha asked her what she wanted after she went through the trouble of building a room for him, she didn’t ask for anything.

Elisha said to him, “Tell her, ‘You have gone to all this trouble for us. Now what can be done for you? Can we speak on your behalf to the king or the commander of the army?’”

She replied, “I have a home among my own people.”

As a representative of God, having a prophet ask you what you desire is a great opportunity. We all at one point wondered what it would be like to have God grant us a wish. But despite the great opportunity, she decline.

The Shunammite Woman’s Reaction To A Promised Son

Her reaction to Elisha’s promise that she would have a son gives us a hint at how she became that way.

Then Elisha said, “Call her.” So he called her, and she stood in the doorway. “About this time next year,” Elisha said, “you will hold a son in your arms.”

“No, my lord!” she objected. “Please, man of God, don’t mislead your servant!”

Even though the Shunammite woman could have asked for a child, she didn’t although it was clearly something she desired. It appears as if she’d been trying and eventually became content without one.

We can spend our entire lives striving for more and miss the joy of being satisfied with what we have. Rather than spending a long time being unhappy, the Shunammite woman shows us that we may eventually have to accept our circumstances and so, why not be satisfied sooner rather than later?

Be Prepared To Leave Everything Behind

“Elisha had told the woman whose son he had brought back to life, “Take your family and move to some other place, for the Lord has called for a famine on Israel that will last for seven years.”

So the woman did as the man of God instructed. She took her family and settled in the land of the Philistines for seven years.

The Shunammite Woman Held On To Things Loosely

Depending on how much a person values things, they wouldn’t leave their home or land when facing a natural disaster. Like The Rich Young Ruler, the more things you have the hard it could be to let them go.

By leaving, the Shunammite woman showed that she held on to her possessions loosely. As believers, it’s the same way we should be. I think of Lot’s wife, who while leaving Sodom and Gomorrah looked back and became a pillar of salt.

Jesus also said, “For where your treasure is, there your heart will be also” (Matthew 6:21 NIV). Therefore, in the same way the Shunammite woman didn’t treasure her house and land, don’t treasure worldly things.

If you do, it could end up being a weight that keeps you back, potentially costing you your life.

In conclusion, the Shunammite woman was a well off woman that did what she could to bless others. Likewise, with whatever we have, we should do the same. Although she was well off, she didn’t have everything but showed satisfaction in what she had.

Since the desire for more is never ending, find happiness with what you currently have. Lastly, leaving her house and land at Elisha’s instructions showed that she wasn’t attached to them. This teaches us to hold on to things loosely so they don’t keep us back.

Lessons From Other Woman In The Bible: