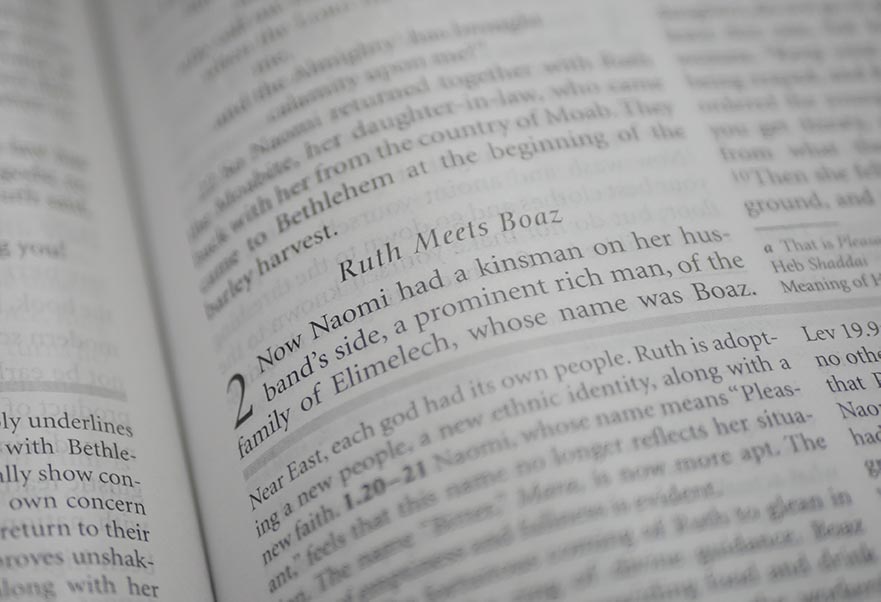 When it comes to finding a life partner, one of the most popular stories of The Bible is the story of Ruth and Boaz. Their story is found in the Book of Ruth and it not only inspires hope for many, but includes 3 life lessons that can bring us opportunities, help us achieve our goals and live a stable life.

The 3 life lessons from Ruth and Boaz are:

Have An Attractive Character

The first life lesson from Ruth and Boaz is to have an attractive character. Throughout the Book of Ruth, we see Ruth as a hardworking and loyal woman. Those characteristics brought her opportunities and made her a success.

Ruth’s loyalty is her most evident characteristic. When Naomi wanted to return to her hometown Bethlehem after losing her husband and sons, she encouraged her widowed daughters-in-law to go back to their homes. Ruth, however, insisted on staying with Naomi saying:

“Don’t urge me to leave you or to turn back from you. Where you go I will go, and where you stay I will stay. Your people will be my people and your God my God. Where you die I will die, and there I will be buried. May the Lord deal with me, be it ever so severely, if even death separates you and me.”

When Naomi and Ruth got to Bethlehem, Ruth went to find work and ended up in the field of Boaz. When Boaz asked the overseer of his harvesters who Ruth was, in addition to telling him, the overseer described her hardworking character saying:

“She is the Moabite who came back from Moab with Naomi. She said, ‘Please let me glean and gather among the sheaves behind the harvesters.’ She came into the field and has remained here from morning till now, except for a short rest in the shelter.”

Boaz preceded to encourage Ruth to keep working in his field (Ruth 2:8-9) and advised the men to look out for her (Ruth 2:16). Boaz wanting her to stay in his field spoke to her hardworking character and we see his admiration for her loyalty when he told her why he was showing her favor. Boaz said:

“I’ve been told all about what you have done for your mother-in-law since the death of your husband—how you left your father and mother and your homeland and came to live with a people you did not know before.

Learning from Ruth and how her character made her attractive to Boaz, we should strive to develop the character that will make us attractive. Proverbs 22:1 says “a good name is more desirable than great riches; to be esteemed is better than silver or gold” (NIV).

We will never be able to measure how much having an attractive character pays off. At the moment Ruth agreed to stick with Naomi, she was just being the loyal person that she was. In the end, as I’ll point out later in this article, it led to Boaz marrying her, something she likely did not anticipate. So, continue to perfect your character. You’ll be amazed at the opportunities and success that come your way.

Listen To The Advice of The Wise

The next lesson from Ruth and Boaz is to listen to the advice of the wise. At a certain point, Naomi in her wisdom gave Ruth some advice and by listening to that advice Ruth got Boaz to marry her.

Ruth chapter 3 opens with Naomi telling Ruth that she must find a home for her where she will be well provided for. In other words, find her a husband. Indicating that Boaz was the one for her, Naomi proceeded to give Ruth exact instructions for attracting him. She said:

“Tonight he will be winnowing barley on the threshing floor. Wash, put on perfume, and get dressed in your best clothes. Then go down to the threshing floor, but don’t let him know you are there until he has finished eating and drinking. When he lies down, note the place where he is lying. Then go and uncover his feet and lie down. He will tell you what to do.”

In response, Ruth said she would do whatever Naomi said and Ruth 3:6 confirms she did saying, “she went down to the threshing floor and did everything her mother-in-law told her to do” (NIV). Although it seemed bizarre, Naomi was speaking from experience, and as the story went on to show, her advice worked!

Ruth Followed Advice Exactly As Given

It’s worth emphasizing that Ruth did everything Naomi told her to do. Taking any step for granted could have changed the outcome. For example, Naomi told her to “go down to the threshing floor, but don’t let him know you are there until he has finished eating and drinking” (Ruth 3:3 NIV).

After arriving on the threshing floor, Ruth could have reasoned that it didn’t matter if Boaz saw that she was there before he was done eating or drinking, but Ruth 3:7 suggests what difference it could have made. It says “When Boaz had finished eating and drinking and was in good spirits…” (NIV). I don’t know about you, but I’m not the same person before and after I eat. If Boaz wasn’t in the right mood he may have responded to Ruth’s actions unfavorably.

Learn From Ruth To Get Your Boaz

Learning from Ruth, we should listen to the advice of the wise to successfully achieve our goals. Furthermore, in listening, we shouldn’t take any detail for granted. For example, if you are a woman reading this article you may be seeking a husband as Ruth was. If you aren’t finding any success, have you sought and listened to the exact advice of women that were successful?

Boaz in the context of the lesson could represent any goal and so it applies to everyone. Proverbs 24:5-6 says:

“The wise prevail through great power, and those who have knowledge muster their strength. Surely you need guidance to wage war, and victory is won through many advisers.

Therefore, be wise by listening to the wise as victory is won through many advisors.

Build Your Life On A Strong Foundation

The last lesson from Ruth and Boaz is to build your life on a strong foundation. Boaz did so by going about marrying Ruth in the proper way. In doing so, he protected himself from problems that could have arisen if he did not.

It all started when Ruth followed Naomi’s instructions to lay next to Boaz on the threshing floor. When Boaz got up in the middle of the night and saw her, Ruth identified herself and said “Spread the corner of your garment over me, since you are a guardian-redeemer of our family” (Ruth 3:9 NIV). As it is commonly interpreted, by telling Boaz to spread the corner of his garment over her, she was asking him to marry her.

Although Boaz moved quickly to settle the matter of marrying Ruth, he didn’t make rash decisions. As some of us know from experience, in our excitement it’s easy to make decisions that end up hurting us in the end. Proverbs 19:2 says “Enthusiasm without knowledge is no good; haste makes mistakes” (NLT).

This analogy is appropriate for what Boaz did. He built his marriage with Ruth on the rock by going about it the right way. At the end of the day, no one would be able to question whether his marriage to Ruth was legal.

Similarly, we should build our lives on the rock. We should look at each decision we have to make as a part of the foundation that we’ll build the rest of our lives. Telling lies or taking shortcuts may appear to be necessary to make progress in the world, but although it looks that way, that type of progress is unstable. So whenever you have to make a decision, remember the thorough process Boaz went through for Ruth and decide to build on the rock as he did.

The story of Ruth and Boaz is an unforgettable story that teaches multiple life lessons. In this article, we looked at three. The way Ruth’s loyalty and hardworking character attracted Boaz teaches us to develop a character that will attract opportunities. Ruth following Naomi’s instructions to ask Boaz to marry her teaches us to listen to the advice of the wise to achieve our goals. Lastly, Boaz going about marrying Ruth legally teaches us to build our lives on a strong foundation one decision at a time.

Related article: 3 Life Lessons From Naomi In The Bible