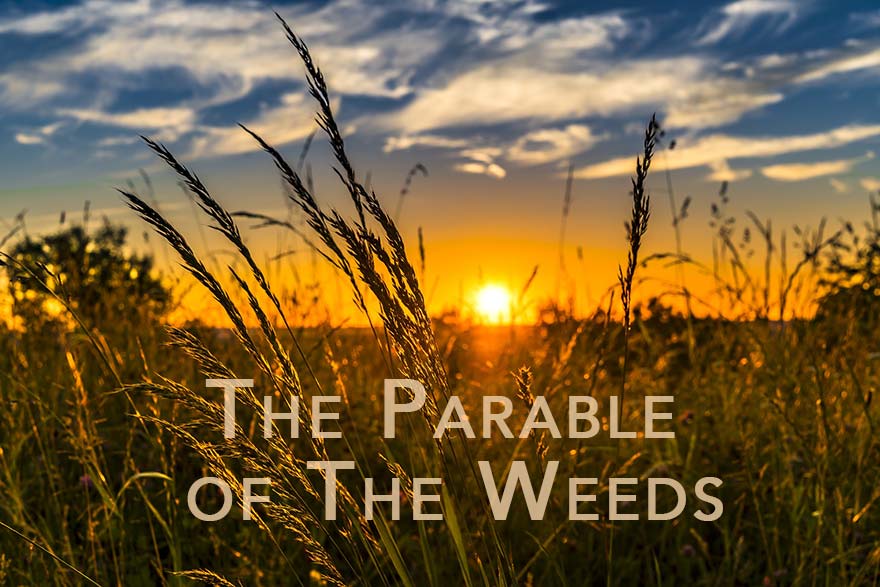 In the parable of the weeds, Jesus shares another example of what the kingdom of heaven is like. In addition to its encouragement to believers to be ready for the harvest that’s coming, there are 3 lessons we can learn from it.

The lessons from the parable of the weeds are God will make a distinction in the future, you will reap what you sow, and weed out the negative in your life. In this article, we’ll look at each of these lessons in detail.

Summary of The Parable of The Weeds

The parable of the weeds is found in Matthew 13:24-30 and its explanation follows in Matthew 13:36-43. If you are unfamiliar with it, here’s a brief summary.

There was an owner that sowed wheat in his field, but an enemy came and sowed weeds. The servants of the owner seeing that there were weeds growing asked if they should uproot them. The owner said, wait until the harvest to avoid harming the wheat. At the harvest, the weeds were pulled out and burned and the wheat was stored away.

God Will Make A Distinction In The Future

At some point in my journey as a believer, I began to wonder why God didn’t inflict immediate judgment on those who were evil. In some cases, it seemed like the unrighteous were prospering more than the righteous. You’ve probably felt the same at one point.

The Weeds Will Be Uprooted At Harvest Time

In the parable, Jesus, who represents the owner that sowed good seeds indicates the time when the weeds will be uprooted. He told his servants:

“Let both grow together until the harvest. At that time I will tell the harvesters: First collect the weeds and tie them in bundles to be burned; then gather the wheat and bring it into my barn.”

Jesus said at the time of the harvest the weeds will be collected and burned. He wasn’t going to uproot the weeds at random or at some arbitrary time. Instead, harvest time was when the wheat was going to be ready to be collected.

It appears that waiting for the harvest has more to do with the protection of the wheat than it is about getting rid of the weeds. In fact, when the servants asked the owner if they should pull up the weeds when they first saw them, the owner said no. Why? He continued by saying “because while you are pulling the weeds, you may uproot the wheat with them.

When everything was ripe, it was going to be easier to make a distinction between the weeds and the wheat. Likewise, at the proper time, those who are of the Kingdom versus those who are not will become apparent.

It should be noted that none of us were saved at birth. We all started out looking like weeds. Imagine if at the first time we looked like weeds we were uprooted? It would have meant destroying those of us who were destined to be wheat!

So while it may seem like God isn’t doing anything about unbelievers, remember that we were once unbelievers also. Just as God was patient with us, we should be patient also. I’ll end this lesson with 2 Peter 3:9. In speaking of the timing of Jesus’ return, it says:

“The Lord is not slow in keeping his promise, as some understand slowness. Instead he is patient with you, not wanting anyone to perish, but everyone to come to repentance.”

You Will Reap What You Sow

Both The Weed and Wheat Were Sowed

In the parable of the weeds, the growth of weeds and wheat came from something. Both were the result of action taken prior. At the start of the parable, Jesus said:

“The kingdom of heaven is like a man who sowed good seed in his field. But while everyone was sleeping, his enemy came and sowed weeds among the wheat, and went away.”

Learning from this, if anything bad appears in our lives it had to be sown by someone or something. In the parable of the weeds, the owner’s enemy who represents the evil one sowed the weeds. Similarly, other people knowingly or unknowingly could be the reason behind your bad outcomes. Sometimes it may be us that sow seeds that later cause us certain issues without us realizing it.

Don’t Expect To Reap Something That Wasn’t Sown

Since it’s impossible for something to grow that hasn’t been planted, we shouldn’t expect to get anything from nothing. This is why the servants in the parable of the weeds were shocked to see weeds appear among the wheat. They questioned the sower: “Sir, didn’t you sow good seed in your field? Where then did the weeds come from?” (Matthew 13:27 NIV)

For example, I once had a nose bleed issue. At one point, almost every night I would wake up thinking I had to blow my nose only to discover my nose was bleeding. As most believers would, I prayed for healing but none came.

Eventually, I asked God to show me the source of the issue. At that point, I became frustrated and thought there had to be a reason. He led me to do some research and it turned out to be because I was neglecting to eat enough green vegetables. I was expecting to reap good health, yet I wasn’t sowing the healthy eating that brought it!

I was expecting to reap good health, yet I wasn’t sowing the healthy eating that brought it!

Weed Out The Negativity In Your Life

In Matthew 13:36-43, the disciples asked Jesus for the meaning of the parable of the weeds and He gave it to them. Jesus explained:

A few verses later, Jesus went on to say that after the weeds are pulled out, “the righteous will shine like the sun in the kingdom of their Father…” (Matthew 13:43 NIV).

The Bad Suppresses The Good

In the explanation of the parable, the righteous shining after the weeds are pulled out teaches us that the weeds (the people of the evil one) were responsible for making God’s kingdom look bad. When the angels took them out, they are described as “everything that causes sin and all who do evil” (Matthew 13:41 NIV) and their removal left the righteous shining.

In the same way that the weeds are pulled out of the world and the righteous shine as a result, we should pull the weeds of negativity out of our lives to shine. We may have many positive attributes, but because negative attributes are also present, it diminishes the positive.

The Weeds Grow By Default

In this world, it takes a conscious and continuous effort to keep the weeds of negativity out of our lives. As you have likely witnessed, it takes no effort for weeds to grow. In my article What You Don’t Manage, You Will Lose, I describe the weeds as growing by default, stealing our time, health, and money if we do nothing to stop them.

In Matthew 5, Jesus teaches that we should get rid of anything in our lives that causes us to sin. To express the importance of doing so he said:

Replace The Weeds With Good Seeds

It’s not enough to simply weed out the negativity in your life. The weeds should be replaced with good seeds. This means we should tap into positivity and let it be a stream that ultimately causes us to shine. This reminds me of the part of Psalms 1 that states:

“Blessed is the one who does not walk in step with the wicked or stand in the way that sinners take or sit in the company of mockers, but whose delight is in the law of the Lord, and who meditates on his law day and night.

That person is like a tree planted by streams of water, which yields its fruit in season and whose leaf does not wither—whatever they do prospers.”

To learn more about how we are like trees and the importance of being planted in the right environment, see my article 3 Life Lessons To Learn From Pslams 1. I also wrote a book that includes the testimony of how my life changed through a change of environment. Click here to preview it on Amazon.

In addition to encouraging believers to be ready for the harvest, the parable of the weeds has 3 lessons. The lessons are: God Will Make A Distinction In the Future, You Will Reap What You Sow, and Weed Out The Negativity In Your Life. As a wise believer, be ready for and patiently await the harvest when God will make a clear distinction between the righteous and unrighteous, sow good seeds so that you reap accordingly, and weed the negativity out of your life while adding positivity.