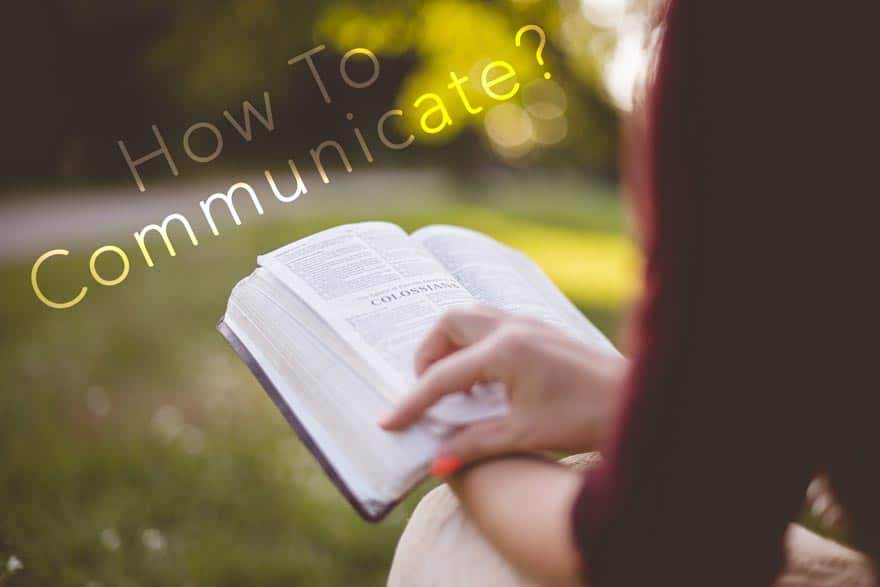 The Bible, as it does with many important aspects of life, has a lot to say about how we are to communicate. Sometimes it addresses the subject directly, like in the verse  “A gentle answer turns away wrath, but a harsh word stirs up anger” (Proverbs 15:1), and other times through the stories of biblical characters.

In this article, I’ll discuss these three ways we are to communicate according to The Bible and provide examples of how you can apply each:

Say Things In A Nice Way

According to The Bible, whenever we communicate it should be in a nice way. This includes speaking in a way that doesn’t bring people down and answering others kindly.

Don’t Bring Other People Down

Whether it’s us trying to feel better about ourselves or to look good in front of others, we can find ourselves saying things that bring other people down. This can take the form of jokes at other people’s expense, bragging about our accomplishments, or gossiping about people’s weaknesses.

This falls under the greater biblical command to love your neighbor as yourself. To not bring others down, think about the times when someone made you feel unimportant. Knowing how that made you feel, remember that people will feel the same way if you do it to them.

This includes the things we say behind other people’s backs. Ephesians 4:29 says “Let no corrupting talk come out of your mouths, but only such as is good for building up, as fits the occasion, that it may give grace to those who hear” (ESV). In or out of the presence of people, we should only say nice things. Things that will build people up rather than bring them down. Even when we have to correct someone on a fault, we should be careful to say it in the nicest way we can.

Another aspect of saying things nicely is answering people in a kind manner. Colossians 4:6 states “Let your speech always be gracious, seasoned with salt, so that you may know how you ought to answer each person” (ESV).

Without first thinking about it, the way we answer people can come off negatively. For example, if your significant other asked you how he or she looks, without thinking about it you might say “that shirt doesn’t look good” or “that dress is too tight”. To the significant other these answers might be interpreted as “the shirt doesn’t look good on me” or “I’m too big for the dress”. In both cases, simply suggesting an alternative or saying “I’m not sure” could soften your answer.

A biblical story that shows the impact of saying things in both a nice and not so nice way is that of Abigail and Nabal. David, before he was king, requested help from Nabal as he was wealthy and David and his men looked after his property in another town. But Nabal gave a harsh response and refused to help them. This made David want to kill Nabal and all the men of his household. Nabal’s wife Abigail, on the other hand, calmed the situation by humbly addressing David as he angrily approached and giving them the help they requested. You can learn more about this story in my article 5 Life Lessons To Learn From Abigail.

When we communicate, how we say things makes a big difference. The Bible teaches us to say things nicely, to always being gracious, and not belittle others.

Recognize When Not To Say Anything

When you think about the word communication, not saying anything doesn’t come to mind. Yet, according to The Bible, recognizing when not to say anything can be just as important as the other aspects of biblical communication.

Don’t Speak Right Away When You Are Angry

Have you ever regretted saying certain things when you were angry? Most of us have. When we are angry, our emotions lead us to say things that we wouldn’t say under normal circumstances. Recognizing this, it’s important to refrain from saying anything when we are angry.

Proverbs 29:11 says “Fools give full vent to their rage, but the wise bring calm in the end” (NIV). The English Standard Versions (ESV) states “A fool gives full vent to his spirit, but a wise man quietly holds it back.” According to this verse, we are considered fools if we don’t control what we say when we’re angry, but wise if we quietly hold back.

As the NIV version points out, the wise bring calm in the end. We can’t bring calm when we are angry, so this suggests that when we bring our emotions under control, then we should speak.  So how can you apply this when you communicate?

Don’t Speak If You Don’t Need To

When you think about the problems we get ourselves into, most if not all stem from something we said. Maybe it was something someone told us in confidence and while casually speaking we made some reference to it that exposed it. In other situations, out of excitement, we might have made a promise that we can’t deliver on.

It’s without a doubt that our tongues can lead us into trouble. Proverbs 21:23 states that “Whoever keeps his mouth and his tongue keeps himself out of trouble” (ESV). By simply keeping quiet, we can keep ourselves out of a lot of trouble. But how can we do this? After all, it’s tempting to share everything that’s on our minds. Here are a couple of ways you can:

Don’t Speak On Subjects You Don’t Know Anything About

Closely related to not speaking if you don’t need to is don’t speak on subjects you don’t know anything about. Have you ever said something only to be proven wrong? Isn’t that embarrassing? There is a temptation to seem smarter than we are and it leads us to think we have to have something to say about everything.

Proverbs 17:28 states that “even a fool who keeps silent is considered wise; when he closes his lips, he is deemed intelligent” (ESV). According to this verse, we ironically appear smarter when we keep quiet. Opening our mouths in ignorance only threatens that image. Here are some ways we can avoid this temptation:

The Bible, particularly the book of Proverbs, is big on not saying anything. After being arrested, Jesus in his wisdom gives us an example of how it’s sometimes necessary to keep quiet. Matthew 27:12 states that “when he was accused by the chief priests and the elders, he gave no answer” (NIV). Let’s now look at the last point on how to communicate according to The Bible.

Take The Time To Understand Before Speaking

An important part of communication is listening and according to The Bible, it is considered folly if we don’t do it. For a long time, I thought I was a good listener and you may think you are too. But listening, as I have come to learn, isn’t the same as hearing, and understanding is on another level.

What It Means To Listen and Understand

Listen is defined as giving one’s attention to a sound (Oxford). Based on this definition, listening requires targeted effort which means normally we aren’t listening to most of the things we can hear. Take a moment now to see what this means. What all sounds are there around you? Bird’s chirping? Fan spinning? Maybe a TV is on in another room?

In the same way that we could be hearing these sounds but ignore them, people could be speaking to us and we not be listening to them. Our minds can elsewhere, thinking about the things we have to do or formulating a point we want to make after the person finishes speaking.

Understanding, which is the next level, first requires listening and it means to “perceive the intended meaning of” what someone is saying (Oxford). According to Proverbs 18:2 “A fool takes no pleasure in understanding, but only in expressing his opinion” (ESV). Sometimes, especially in disagreements, we can be so focused on our own opinions that we don’t take the time to understand what the other person is trying to say. According to The Bible, this is foolish.

Don’t Interrupt People While They Are Speaking

Sometimes, we can find ourselves interrupting people as they speak to give our own opinions. We may even apologize before doing so, proving that we know it’s wrong, but still do it. James 1:19 says “My dear brothers and sisters, take note of this: Everyone should be quick to listen, slow to speak and slow to become angry” (NIV).

Here are few practical ways to ensure you are listening and understanding others:

Saying things nicely, recognizing when not to say anything, and taking the time to understand before speaking are just a few examples of how we are to communicate according to The Bible. Since they stem from God’s Word, we can be sure that applying them will make us better communicators. Be encouraged!

Filed Under: Bible Topics Tagged With: Communication, How Tos, Proverbs, Speaking, The Bible