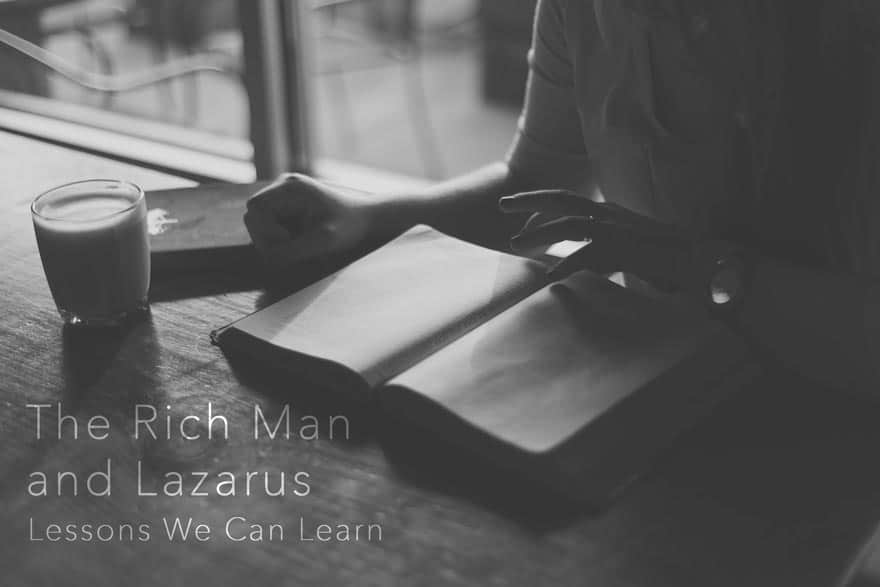 The parable of The Rich Man and Lazarus is packed with both spiritual and life lessons. Some of the spiritual lessons give us a glimpse of what life after death might be like and some of the life lessons can help us live more fruitfully. The parable is found in Luke 16:19-31. If you’re unfamiliar with it, here’s a summary:

There was a rich man who lived in luxury every day and an extremely poor man named Lazarus that long for something to eat from the rich man. Eventually, both of them died.

So the rich man asked that Lazarus be sent to warn his brothers of the place of torment he was in. But Abraham told him that his brothers should listen to the warnings of Moses and the Prophets and that someone coming back from the dead to warn them won’t cause them to believe.

The Parable of The Rich Man and Lazarus Summary

The following are 4 lessons we can learn from The Parable of The Rich Man and Lazarus:

Let’s now look at each of these lessons in more detail.

We Will All Die One Day

Whether it’s through attending a funeral, witnessing a loved one’s health diminish, or hearing of someone’s sudden death, every so often we are reminded of our mortality. In the parable of The Rich Man and Lazarus, we get another reminder.

Jesus described the rich man as “dressed in purple and fine linen and lived in luxury every day” (Luke 16:19 NIV), on the other hand, he described Lazarus as a poor beggar “covered with sores and longing to eat what fell from the rich man’s table. Even the dogs came and licked his sores” (Luke 16:20-21 NIV).

Each of them represented the extreme sides of how people may live. Despite the extreme differences, Luke 16:22 states that “The time came when the beggar died and the angels carried him to Abraham’s side. The rich man also died and was buried” (NIV). Both of them died.

This teaches us that no matter who we are, what we have, or how we live, one day each of us will die (if we aren’t raptured first). Even though this is the reality we all face, it seems as if many of us avoid the subject of death altogether. But as I discovered, after avoiding the subject for a long time, being aware that you’ll one day die can actually help you live a more generous life.

The Reality of Death Can Make Us More Generous

Knowing that we can die at any moment, and will die eventually, can cause us to see possessions from a different perspective. Like Job, we may adopt the saying “Naked I came from my mother’s womb, and naked I will depart” (Job 1:21 NIV). If the rich man lived with the reality of death in mind, chances are he would have been more generous to Lazarus.

Learning from what the rich man did not do, and given the reality that one day we will all die, let’s be more generous with our possessions. If you think about it, in the end, whether we do the giving or not, the results from all our hard work in life will go to someone. Being more generous now simply gives us a choice!

Repentance Determines How We Will Spend Eternity

A false conclusion we might take away from the parable of The Rich Man and Lazarus is that having riches will somehow cause us to go to hell whereas being poor makes a person qualify for eternal life. Thinking this way can cause us to suffer unnecessarily and potentially miss eternal life.

Now we can’t argue against it being harder for the rich to enter the kingdom of heaven. Jesus said it directly in Matthew 19:23. But the stories of Abraham and Job show that it’s possible for us to be rich and righteous at the same time. As a side note, the fact that believers can be both wealthy and righteous is one of the lessons I shared in my article 5 Life Lessons From The Story of Abraham.

Now, what does determine how we spend eternity is repentance. We see this in the statement the rich man made to Abraham in Luke 16:30: “No, Father Abraham! But if someone is sent to them from the dead, then they will repent of their sins and turn to God. (NLT).

The rich man stated what they needed to do to avoid the place of torment he was in. It wasn’t to become poor nor was it to avoid being wealthy. It was repenting of their sins and turning to God.

We Are Not Saved By Works

Related to the lesson that repentance determines how we spend eternity, the parable of The Rich Man and Lazarus also teaches us that we are not saved by works. Given the status that the rich have in the world, the rich man might have assumed his riches qualified him to receive eternal life. That was clearly not the case.

Remember, “it is by grace you have been saved, through faith—and this is not from yourselves, it is the gift of God— not by works, so that no one can boast” (Ephesians 2:8-9 NIV).

Have you ever asked God to give you some sort of sign? Sometimes we may doubt that God is real or that he wants us to do a certain thing and so just to be sure, in our hearts, we may find ourselves asking for some sort of sign as confirmation. If you ever received one, you might have discovered that it wasn’t enough to keep you from doubting in the future.

In the parable of The Rich Man and Lazarus, this lesson is made clear. When The Rich Man asked Abraham to send Lazarus to warn his brothers of the place of torment that he was in, “Abraham replied, ‘They have Moses and the Prophets; let them listen to them.’ (Luke 16:29 NIV).

Thinking that Moses and the Prophets weren’t enough for his brothers to believe, The Rich Man said “No…if someone from the dead goes to them, they will repent.’ (Luke 16:30 NIV). What Abraham said in response points out the lesson.

“He said to him, ‘If they do not listen to Moses and the Prophets, they will not be convinced even if someone rises from the dead” (Luke 16:31 NIV). Isn’t that interesting? Like the Rich Man, many of us may think people would believe in God if they saw a sign like someone coming from the dead, but is that reality?

Examples of People Having Evidence But Remaining Unconvinced

In addition to it being plainly stated in the parable, there are many examples that show evidence isn’t always enough to convince us.

Despite Jesus healing the sick and miraculously feeding the five thousand, in response to telling the crowd that witnessed those signs to believe in the one God sent, the crowd asked him “What sign then will you give that we may see it and believe you? What will you do” (John 6:30 NIV)? Clearly, the evidence they got wasn’t enough for them.

Another example is the story of Pharaoh keeping the Israelites from leaving Egypt. Even with all the plagues that God sent through Moses as signs, Pharaoh continued to resist. In the parable, The Rich Man knew of Moses and The Prophets and he didn’t think that his brothers would believe through them possibly because he himself didn’t believe them when he was alive. But if you think about it, in the stories of Moses and The Prophets, there were miraculous signs performed also.

So let’s learn this lesson by no longer deceiving ourselves thinking evidence will help us to believe. Like The Rich Man could have listened to Moses and The Prophets, we have Moses, The Prophets, and the entire new testament to listen to. Lazarus, in the midst of his poverty and suffering, would have listened and accepted the warnings. The Bible therefore should be enough for all of us as well. This leads us to the next lesson we can learn from the parable.

Knowledge Is Available That Can Change Our Lives

Another lesson the parable of The Rich Man and Lazarus teaches us is that knowledge is available that can change our lives. As we saw in the last point, when the rich man asked Abraham to send Lazarus to warn his brothers, Abraham told him that they have Moses and the prophets.The New Living Translation in particular states that Abraham told them “Moses and the prophets have warned them. Your brothers can read what they wrote” (Luke 16:29).

By telling the rich man that his brothers can read what Moses and The Prophets wrote meant that the knowledge that could have changed their lives was available to them. In the same way, we should recognize that there is so much knowledge available to us today that can change our lives.I can remember the first time I started reading The Bible and other self-help books as a teenager. I was continually blown away by the lessons I was learning that eventually led me to become the person I am today.

By reading this, it shows that you have already discovered this truth. Too busy living in luxury, the rich man ignored what Moses and the prophets had to say. If he listened, his destination might have been different. Let’s never get too great in life to learn from others. Continue to study The Bible and take in as much knowledge as you can. There is so much out there that can change our lives if only we read it.

There you have it. 4 Lessons we can learn from The Parable of The Rich Man and Lazarus. Remember, one day we will all die, so let’s be generous. Repentance will determine how we will spend eternity, so let’s not be distracted by other things that appear to be the way.Evidence isn’t always enough to convince us, so let’s stop fooling ourselves by asking for a sign. Lastly, knowledge is available that can change our lives. Let’s take in as much of it as we can.