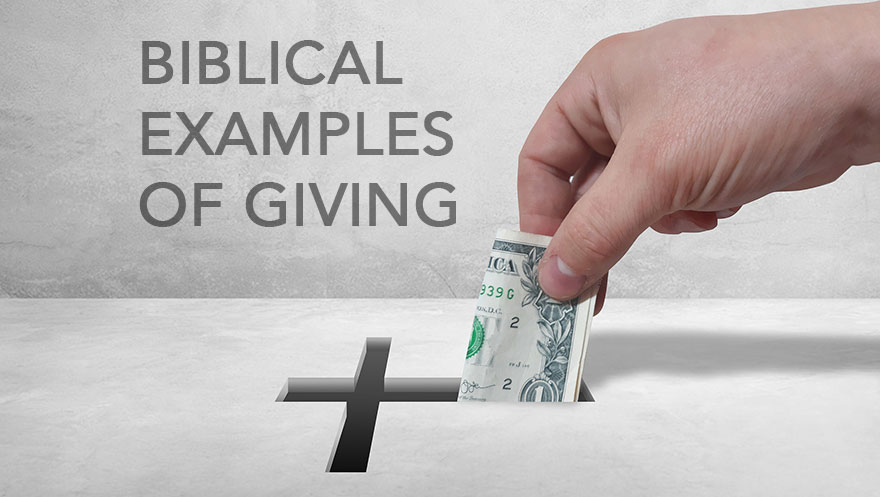 There are many things expected of believers, one of the greatest is giving. The Bible is clear that believers should be generous. One verse starts, “Give, and it will be given to you…” (Luke 6:38). Another says, “Each of you should give what you have decided in your heart to give, not reluctantly or under compulsion, for God loves a cheerful giver” (2 Corinthians 9:7 NIV).

Other than the verses that explicitly tell us to give, there are many biblical examples of giving that we can learn from. In this article we’ll look at 5.

The Poor Widow Gave More Than It Seemed

The Poor Widow’s Offering is an example of giving showing that God sees giving differently from man. You can find the story in Mark 12:41-44.

In summary, Jesus was watching people put money into the temple treasury. Of them was a poor widow who put in two very small copper coins. Although it was little, Jesus told his disciples that she put in more than those that gave large sums. How so? He continued, “They all gave out of their wealth; but she, out of her poverty, put in everything—all she had to live on” (Mark 12:44 NIV).

Today, as it was in Jesus’ time, the quantity of what someone gives is what people find significant. But unlike humans who judge giving based on quantity, God judges it based on quality.

I go into more detail on this point in my article 3 Lessons From The Widow’s Offering. But the takeaway from the widow’s example is that only God knows everyone’s circumstances. Only He can truly judge. Don’t compare your giving to others. In God’s eyes, a gift that may seem minor could be huge!

The Shunammite Woman Gave A Meal and Room

Another example of giving in The Bible is when the Shunammite woman gave a meal and room to Elisha the prophet. Her story is found in 2 Kings 4:8-37. Among the many lessons we can learn from her giving, one that stands out is giving to God’s workers.

After giving Elisha food each time he passed by, The Bible says she told her husband:

“Behold now, I know that this is a holy man of God who is continually passing our way. Let us make a small room on the roof with walls and put there for him a bed, a table, a chair, and a lamp, so that whenever he comes to us, he can go in there.

It’s unclear if she was simply generous to everyone, but based on what she told her husband, it appears that Elisha, being a holy man of God, influenced her decision to make a small room for him.

Like the Shunammite woman, we should give to God’s workers. Jesus confirms this saying:

“And if anyone gives even a cup of cold water to one of these little ones who is my disciple, truly I tell you, that person will certainly not lose their reward.”

Not all examples of giving in The Bible are money related, but their impact could be considered equivalent. One such example is when Jethro gave Moses leadership advice.

The story is found in Exodus 18. Jethro, Moses’ father-in-law, came to visit him and saw that he was acting as a judge for the Israelites. The people would stand before him all day to get their disputes resolved. Jethro advised Moses that what he was doing wasn’t good and that he should delegate the majority of the cases, only deciding the most challenging ones.

Like money, the advice Jethro gave Moses was very valuable. It freed him up to do more important things which in turn allowed him to have a greater impact.

Giving Is Not Limited To Money

From this example we see that giving advice can be just as valuable as giving money. So the next time you feel like you don’t have anything to give, remember that a gift isn’t limited to money or things.

The Widow At Zarephath Gave Her Last

The Widow at Zarephath is an example of giving similar to The Poor Widow. Found in 1 Kings 17, what stands out about her story is that she gave in an act of faith.

If you aren’t familiar with the story, there was a drought and God told Elijah to meet a widow in Zarephath who would give him food. Upon meeting the widow, Elijah asked her for something to drink and a piece of bread. In response she said:

“I don’t have any bread—only a handful of flour in a jar and a little olive oil in a jug. I am gathering a few sticks to take home and make a meal for myself and my son, that we may eat it—and die.”

What she had was her last. After eating it she expected to die along with her son. However, Elijah told her not to be afraid, but to make something for him first, “For this is what the Lord, the God of Israel, says: ‘The jar of flour will not be used up and the jug of oil will not run dry until the day the Lord sends rain on the land” (1 Kings 17:14 NIV).

She did as Elijah said and just as the Lord promised, the flour and oil did not run out.

Trust God In Your Giving

Like the Widow of Zarephath, we should trust God in our giving. Whether it’s giving him 10% of what we earn first, or all we have, he promises to come through for us when we give in faith.

God Gave What Could Not Be Given Back

I’m sure you are well aware of this example of giving. It’s God’s gift of Jesus, his only son. John 3:16 says, “For God so loved the world that he gave his one and only Son, that whoever believes in him shall not perish but have eternal life” (NIV)

Although there are quite a few lessons we can learn from God giving us Jesus, the one I want to highlight is giving to people that can’t pay us back. As you may know, God’s gift of Jesus was not only something we didn’t deserve, but something we aren’t able to pay back. The best we can do is commit our lives to him in return.

The Bible speaks of how we should be like our heavenly father. For instance, after speaking about how we are no different from sinners if we only love those who love us, he said, “Be perfect, therefore, as your heavenly Father is perfect.” (Matthew 5:48 NIV).

So to be like our heavenly father, we should give like He gives. Not preferring to give to people who can pay us back, but to those that cannot.

In conclusion, I hope these examples of giving in The Bible gave you a better understanding of how believers should give. We saw that God sees the quality of a gift as more important than its quantity. That we should remember to give to God’s workers. Giving isn’t limited to money. Give in faith. And to give to people that can’t pay us back.To learn more about giving, see my article 3 Biblical Lessons On Giving.