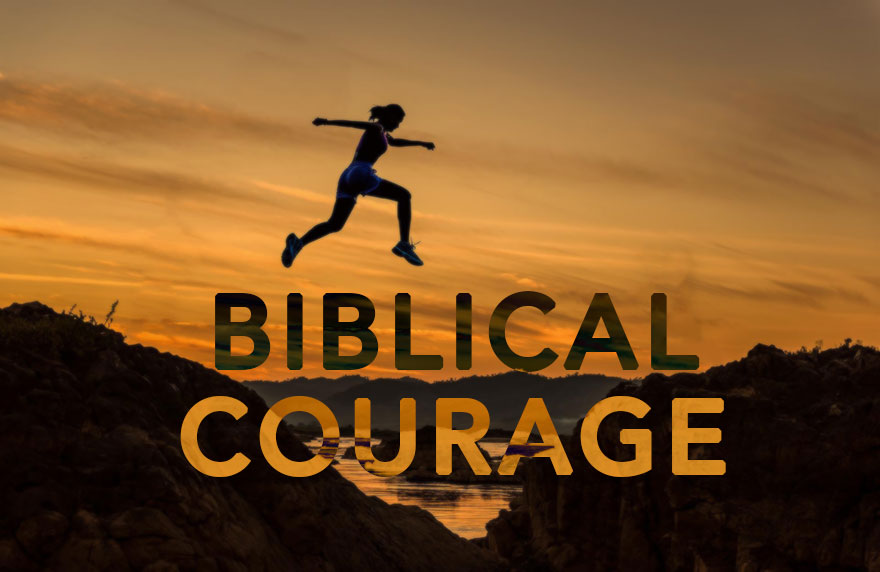 Courage is one of those attributes that both believers and unbelievers struggle to develop. Come to think of it, there is probably no point where we are entirely courageous. There is always some situation that calls for more courage than we presently have.

In this article, I’ll share biblical examples of how God enabled people to be courageous. They should give you new insight into what it means to be courageous and that in turn will help you to be.

David Credits God For His Courage

One biblical example of courage that just about everyone knows about is David fighting Goliath. Goliath was a giant and all of the trained Israeli soldiers at the time were afraid to fight him. On the other hand, David although a boy had the courage to face Goliath and ultimately defeated him.

Where did such courage come from? It’s found in David’s response to Saul when Saul told him he was no match for Goliath. David said:

“Your servant has been keeping his father’s sheep. When a lion or a bear came and carried off a sheep from the flock,

Your servant has killed both the lion and the bear; this uncircumcised Philistine will be like one of them, because he has defied the armies of the living God.

David acknowledged that God rescued him from the paw of the lion and the paw of the bear. He determined that Goliath (the Philistine) would be similar. This means the courage he had was based on past experiences of God bringing him through.

Build Courage From What God Brought You Through

As I’ve stated at the start of the article, there appears to always be some situation that calls for more courage than we presently have. Learning from what enabled David to have the courage to face Goliath, we can compare present challenges that call for courage to previous challenges that God brought us through.

It’s almost like God builds our faith in him one obstacle at a time. As soon as we have enough courage in him to conquer one thing, we graduate to the next.

As I write this, I remember the time I took over a youth group in my early twenties. There was an annual youth report I was tasked with writing but was too afraid to do so. Since then, God has built my courage to where I have written multiple reports, articles, and a book.

That thing that may seem scary now will be your testimony later.

Joshua and Caleb Believed God Would Help Them

Another biblical example of courage that shows God enables us to be courageous is the courage Joshua and Caleb had when they wanted to take the promised land. The story is commonly referred to as the 12 spies.

In summary, a representative from each Israeli tribe was sent to spy on the land God was going to give them. Of the 12 of them that went, only Joshua and Caleb had the courage to attack the people of the land in order to capture it.

Unlike their fellow spies, they understood that God was going to help them and because of it, success was guaranteed. Understanding this truth, there was no reason to be afraid. Here it is in their own words:

The land we passed through and explored is exceedingly good.

If the Lord is pleased with us, he will lead us into that land, a land flowing with milk and honey, and will give it to us.

So you see, their courage was based on the fact that they knew God was on their side. In contrast, the other spies that witnessed the same land didn’t acknowledge God as their help and were afraid.

To learn more about this story, see my article 3 Life Lessons From The 12 Spies.

This next biblical example of courage shows how God works behind the scene enabling us to be courageous. It’s found in 2 Kings 6. The Arameans were at war with Israel and because Elisha kept advising the king of Israel of their plans, they sent troops to capture him.

When they surrounded the city, Elisha’s servant was afraid and concerned about what to do. Elisha told him not to be afraid and that “Those who are with us are more than those who are with them” (2 Kings 6:16 NIV). He then asked God to open the servant’s eyes so that he could see God’s divine protection. When God did, the servant “looked and saw the hills full of horses and chariots of fire all around Elisha” (2 Kings 6:17 NIV).

Do you think the servant was afraid after witnessing that? Of course not. At first, he couldn’t appreciate the protection of God and was afraid, but when his eyes were opened he saw it and had no reason to fear. Elisha whose eyes were already open was courageous from the start.

Be Courageous Because God Is With You

As believers, we have nothing to fear. Because we have God on our side we can be courageous in whatever scary situation he leads us to. Like David’s courage to fight Goliath, each situation God brings you through will help you have the courage for the next.

Joshua and Caleb understood God would lead them and so they didn’t fear taking the promised land. Similarly, Elisha who was able to see God’s divine protection showed courage from the start.

So whenever you have a need for courage, remember the most important lesson about it. God enables you to.

“Have I not commanded you? Be strong and courageous. Do not be afraid; do not be discouraged, for the LORD your God will be with you wherever you go.”