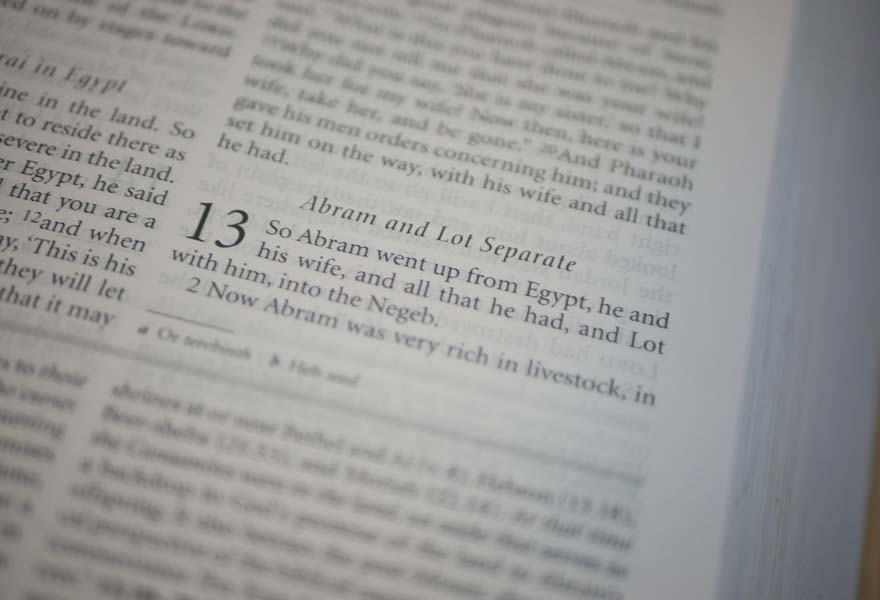 There are 3 life lessons worth pointing out in the story of Abraham (Abram) and his nephew Lot. Their story is found in the book of Genesis and the lessons I’ll share are based on when Abraham and Lot separated in Genesis 13.

Summary of Abraham and Lot’s Story

If you are unfamiliar with their story, Abraham and Lot lived together but began to have issues because of each of their growing possessions. Abraham approached Lot about the issue and gave him first preference as to which part of the land to take. Lot chose the part that looked better but it was near the wicked people of Sodom.

So what are the 3 life lessons from the story of Abraham and Lot?

Discuss Issues With Others Directly

One of the first lessons that stand out in the story of Abraham and Lot is to go to others directly to discuss any issues you have with them. When tensions started to rise between Abraham’s and Lot’s herders, The Bible doesn’t say that Abraham complained or gossiped about it. Instead, The Bible shows Abraham going to Lot to discuss it.

Abraham Goes To Lot To Discuss Their Issues

‘So Abram said to Lot, “Let’s not have any quarreling between you and me, or between your herders and mine, for we are close relatives.

The way Abraham went out about resolving the issue with Lot isn’t how everyone usually handles their issues with others. When tensions start to rise between two people, there is a tendency for each of them to make the other person the sole cause of the issue and go on complaining about it. Sadly, this tendency ends up causing more tension.

I’ve experienced something similar to Abraham and Lot on the job. I returned to a company in a role I previously held and tensions arose between me and someone from another department that worked on parts of the same thing. Unfortunately, I didn’t have the wisdom at the time to address the issue with her directly, but our leaders eventually met with us and worked it out.

If Someone Offends You, Go To Them

The way Abraham handled his issues with Lot is similar to the first course of action Jesus gave for dealing with fellow believers that offend us. He said, “If your brother or sister sins, go and point out their fault, just between the two of you. If they listen to you, you have won them over” (Matthew 18:15 NIV).

Normally, people are reasonable. Learning from Abraham and Lot, going to others directly to deal with issues is the best course of action. Not talking about it or complaining about it only makes things worse.

Make Sacrifices For The Sake of Peace

Another lesson worth pointing out from the story of Abraham and Lot is that we should make sacrifices for the sake of peace. When Abraham brought the quarreling issue up with Lot, he gave lot first preference in an effort for them to be at peace.

Many will argue that having peace is far more valuable than having great possessions. Abraham is probably one of them. Since he should be one of our biblical role models, we should learn from him by adopting the same spirit; the spirit of preferring to give rather than receive (Acts 20:35) and giving up your shirt too if someone demands your coat (Luke 6:29).

Paul states that we should make sacrifices for the sake of peace explicitly. In Romans 12:18 he says “If it is possible, as far as it depends on you, live at peace with everyone” (NIV).

This is not an easy lesson for most of us. Nobody wants to be taken advantage of. Nonetheless, it’s something to learn from the story of Abraham and Lot, and we should do our best to apply it.

Things May Not Be As Good As They Seem

The final lesson I’ll point out from the story of Abraham and Lot is that things may not be as good as they seem. This lesson stems from Lot deciding to take the part of the land that appeared more prosperous only to discover an issue later on.

Lot appeared to have gotten the better part of the land, but later in Genesis 13, The Bible gives a detail that shows it wasn’t all great. The land Lot chose was near Sodom (The “Sodom” in Sodom and Gomorrah), and verse 13 says “the people of Sodom were wicked and were sinning greatly against the Lord” (NIV).

As you probably know, later in Genesis Lot had challenges dealing with those people. They were so wicked that the men were prepared to rape men that visited Lot over having his virgin daughters that he offered them (Genesis 19). The Lord eventually destroyed the part of the land Lot chose due to the wickedness, reiterating the lesson that things may not be as good as they seem.

In life, the obvious choice may not always be the best choice. As some say “the grass isn’t always greener on the other side.” In Lot’s case, the grass was literally greener but there were some elements that made it bitter.

It’s like a job I spent 3 months in. It was my dream job and I would be working in a nice office with great equipment. Unfortunately, it turned out to have a horrible culture and before I could find another job and resign, the company decided to let me go.

So whenever you are about to make what appears to be the obvious choice, remember Abraham and Lot’s story. Proverbs 19:2 says “Enthusiasm without knowledge is no good; haste makes mistakes” (NIV). Do your due diligence as things may not be as good as they seem.

The story of Abraham and Lot teaches some valuable lessons. In this article, I shared 3. First, Abraham approaching Lot directly to discuss their issues is a good example of how we should discuss issues with others directly.

When Abraham gave Lot the first choice as to which part of the land he wanted, it teaches us that we should make sacrifices for the sake of peace. Lastly, Lot choosing the part of the land that appear prosperous but had issues reminds us that things may not be as good as they seem. I hope you were blessed!

2 replies to 3 Life Lessons From Abraham and Lot