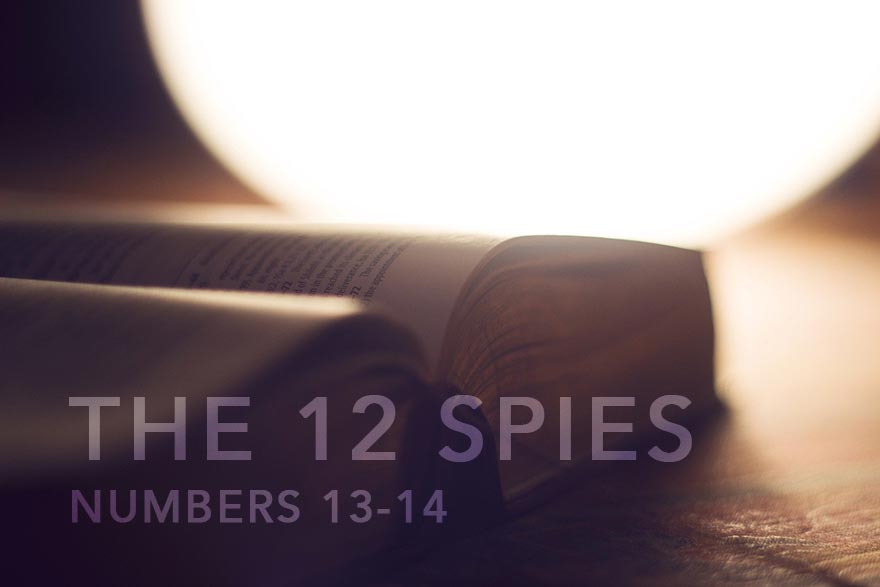 If there is one thing you know about the Israelites in The Bible, it’s that they had many ups and downs in their walk with God. The story of the 12 Israelite leaders exploring Canaan to inhabit the promised land is one example.

The story, which is found in Numbers 13-14 is also known as the 12 spies and in this article, I’ll share 3 life lessons from it.

The life lessons from the 12 spies are:

We Have To Work For What God Wants To Give Us

Numbers 13 starts out highlighting that the land of Canaan was something God was giving the Israelites. It says:

‘The Lord said to Moses, “Send some men to explore the land of Canaan, which I am giving to the Israelites. From each ancestral tribe send one of its leaders.”

Even though God said it was the land he was giving the Israelites, he still instructed Moses to send 12 spies to explore it. That exploring, as we later see in the story, was the step before attacking the inhabitants to take possession of it.

The confirmation is found when the 12 spies returned, Caleb said “We should go up and take possession of the land, for we can certainly do it” (Numbers 13:30). But most of the other spies said, “We can’t attack those people; they are stronger than we are” (Numbers 13:31).

Put Your Faith Into Action

Like the Israelites, the things God promised you may require effort on your part to receive it. As we see earlier in the story of the Israelites, he can and does give certain things to us miraculously. In the case of the promised land, God had them send 12 spies, which shows us that everything won’t come that way.

James 2:26 says “For as the body without the spirit is dead, so faith without works is dead also” (NIV). So if you truly believe God wants to give you something he promised, act as though you do. Just because he promised it doesn’t mean it will come miraculously. As he was doing with the 12 spies, each step he leads you to take could be a step towards getting what he is giving you.

Remember What God Did When You Face New Challenges

Have you ever found yourself doubting that a troubling situation will work out? It seems like no matter how many times God comes through for us, we tend to doubt he will do so again when we face a new challenge. We see the same pattern with the Israelites in Number 13-14 and what God did to them and the 12 spies is a reminder that we should never forget what God did for us.

After most of the spies discouraged their fellow Israelites by giving a false report of the land of Canaan, The Bible says “the community raised their voices and wept aloud” (Numbers 14:1 NIV). Furthermore, they were ready to stone 2 of the spies (Joshua and Caleb) who tried to persuade them that the Lord would help them take the land (Numbers 14:10).

In response to these events the Lord told Moses:

Since the Israelites continued to forget what God did for them, God was prepared to abandon them and move forward with Moses to establish the nation he desired (Numbers 14:12). Thankfully, by Moses’ request, God forgave them (Numbers 14:20), but the spies that had shared the false reports died of a plague, and the Israelites were subjected to 40 years in the wilderness (Numbers 14:32-33).

Trust In The Lord With All Your Heart

No matter what challenges you face in life, as Proverbs 3:5 says “Trust in the Lord with all your heart and lean not on your own understanding” (NIV). Unlike 10 of the 12 spies that forgot what God did for them, we should remember what He did for us whenever we face a new challenge.

Not knowing how he will work things out should not cause us to doubt his ability to do it. If he blew our minds with how he came through before, he can surely do it again!

We Need The Right Mindset For Success

Another lesson that stands out in the story of the 12 spies in Numbers 13-14 is that we need the right mindset for success. Although all 12 spies went to the land of Canaan and saw the same things, 2 of them interpreted what they saw differently. In the end, because the 2 had a different mindset from the other 10, they succeeded.

The difference in how the spies saw the land is found in Numbers 13:30-33. After describing what they all saw, Caleb said “We should go up and take possession of the land, for we can certainly do it” (Numbers 13:30 NIV). On the other hand, most of the other spies said “We can’t attack those people; they are stronger than we are” (Numbers 13:31 NIV).

In verse 33 they went on to say: “We saw the Nephilim there (the descendants of Anak come from the Nephilim). We seemed like grasshoppers in our own eyes, and we looked the same to them” (NIV).

In contrast, the following chapter shows Joshua joining Caleb in urging the people to trust that God will give them the land. Both of them said, “If the Lord is pleased with us, he will lead us into that land, a land flowing with milk and honey, and will give it to us” (Numbers 14:8 NIV).

How We Interpret Things Affects What We Do

Remember that God sent the 12 spies to a land that he said he was giving them. In other words, the battle was already won. All they had to do was believe it and take action. How many things has God already given us that we simply have to believe and take action toward possessing? Don’t let unbelief cause you to miss out. Trust God, develop the right mindset, and take action towards the things God wants to give you.

The story of the 12 spies found in Numbers 13-14 teaches us many lessons. In this article, we looked at 3. God giving the Israelites the promised land but still having them spy it out to attack it teaches us that we sometimes have to work for what God wants to give us.

10 of the 12 spies and the Israelites being punished for not believing in God after all he did is a reminder that we should never forget what God has done for us when we face new challenges.

Lastly, you learned that we need the right mindset to succeed since the 12 spies saw the same land, responded differently, and consequently experienced different outcomes.