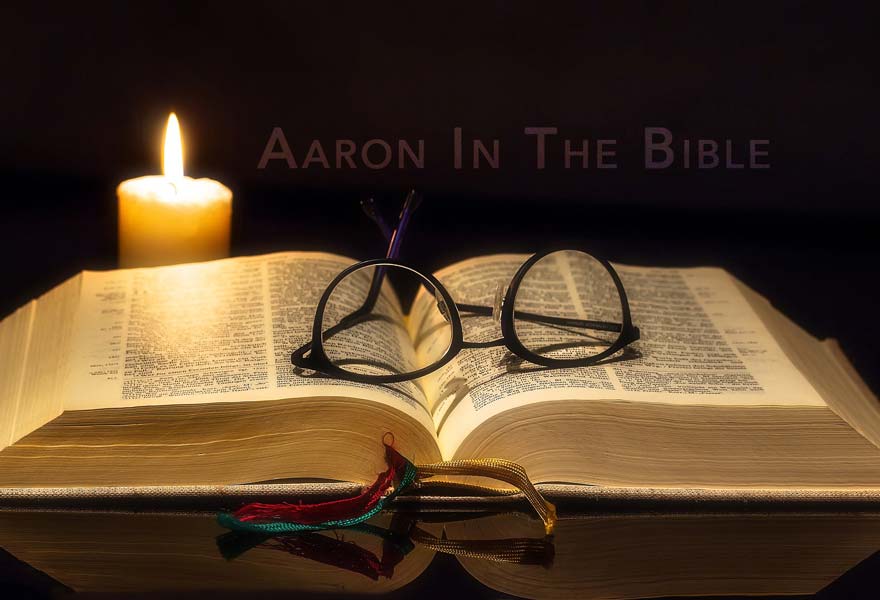 When you think of the leadership of The Israelites, Aaron might not be the first to come to mind but he played a significant role. Like many other Bible characters, he had his faults, but nonetheless, he is someone we can learn from.

In this article, we’ll look at 3 life lessons from Aaron in The Bible. The lessons, which stem from 3 separate stories, are:

We All Have A Part To Play In Life

The first life lesson we can learn from Aaron is that we all have a part to play in life. This lesson stems from the story of when God called Moses in Exodus chapters 3 through 4. As I’ve highlighted in my article 3 Lessons To Learn From The Call of Moses, God called Moses to lead the Israelites out of Egypt, but he made many excuses as to why he couldn’t do it.

Since one of the excuses Moses made was that he couldn’t speak, he decided to use Aaron. God told Aaron to “Go into the wilderness to meet Moses” (Exodus 4:27 NIV) and he told Moses that Aaron “will speak to the people for you, and it will be as if he were your mouth and as if you were God to him” (Exodus 4:16 NIV).

Although Aaron wasn’t the primary one that God called to lead the Israelites, he had a significant part to play. Without Aaron, Moses may have avoided the mission and if he did go he probably wouldn’t have been as effective.

In the same way that Aaron played his part, we all have a part to play in life. God may call us to meet up with someone to help them in our area of gifting to accomplish His will on earth. Just as Aaron’s name wasn’t mentioned as much as Moses’, our names may not be mentioned as much, but the contribution we’ll make is still a big deal.

Don’t let worldly ideas about leadership keep you back from making the contribution God created you to make. Like Aaron, play your part in life whatever that looks like. Everyone may not see and appreciate all you do, but our all-knowing God will.

We Can Easily Be Led Astray

The next life lesson we can learn from Aaron is that we can easily be led astray. This lesson is based on Aaron’s response to The Israelites when they asked him to make them an Idol. It appears that Aaron immediately accepted the Israelites request for a god almost bringing disaster upon them.

Aaron Was Led Astray By The Israelites

The beginning of Exodus 32 highlights the moment The Israelites requested a god and Aaron’s response. It says:

‘When the people saw that Moses was so long in coming down from the mountain, they gathered around Aaron and said, “Come, make us gods who will go before us. As for this fellow Moses who brought us up out of Egypt, we don’t know what has happened to him.”

Aaron answered them, “Take off the gold earrings that your wives, your sons and your daughters are wearing, and bring them to me.”

Despite all of God’s power that Aaron witness alongside Moses, it’s surprising to see him easily give into The Israelites demand for an Idol. Moses was even shocked to see what Aaron did. He said to Aaron, “What did these people do to you, that you led them into such great sin?” (Exodus 32:21 NIV).

It isn’t clear how Aaron was so easily led astray, but he shows how easy it is for any of us to be negatively influenced. Understanding this, we should do our best to protect ourselves from being led astray.

One way we can protect ourselves is by building faith in the truth. In refuting some people who were saying that there was no resurrection of the dead, Paul said ‘Do not be misled: “Bad company corrupts good character” (1 Corinthians 15:33 NIV). For similar reasons, Jesus told his disciples to beware of the teaching of the Pharisees and Sadducees (Matthew 16:12).

Without a firm grasp of what is the right thing to do, we can be led to do the wrong thing. Although he was Moses’ spokesperson, maybe Aaron didn’t have a firm belief in what he spoke. Or knowing the people were prone to evil (Exodus 32:22), maybe Aaron feared them more than he did God. Whatever the reason, he shows us that we can easily be led astray and for this reason, we should be on guard.

We Shouldn’t Criticize Others

The last life lesson from Aaron we’ll look at is we shouldn’t criticize others. This lesson is taken from Numbers chapter 12 where Aaron and Miriam Opposed Moses. Because Aaron and Miriam criticized Moses, God’s anger burned out against them and Miriam was left with leprosy for seven days.

Aaron and Miriam’s criticism of Moses is found in the opening verses of Numbers 12. It says:

‘Miriam and Aaron began to talk against Moses because of his Cushite wife, for he had married a Cushite.

“Has the Lord spoken only through Moses?” they asked. “Hasn’t he also spoken through us?” And the Lord heard this.’

As with all forms of criticism, Aaron and Miriam’s criticism was based on something Moses did that they didn’t like. Although they were entitled to their opinions on what type of woman Moses should marry, making it a thing to question God’s call of Moses was on another level.

Like Aaron and Miriam, we may find ourselves doing the same. Personally, on too many occasions, I’ve found myself criticizing others in my heart. For some reason, we easily see the imperfections in others but neglect to put our own weaknesses in perspective. As Jesus puts it, we see the speck of sawdust in other people’s eyes but miss the plank in ours (Matthew 7:3-5).

Seeing that God’s anger burned out against Aaron and Miriam for criticizing Moses, let’s not criticize others; especially our fellow brothers and sisters. Although we may not experience immediate judgment, Jesus said “everyone will have to give account on the day of judgment for every empty word they have spoken” (Matthew 12:36 NIV).

As stated at the start of this article, Aaron may not be the first to come to mind when you think of the Israelites’ leadership, but he played an important role. As Moses’ spokesperson, Aaron teaches us that we all have a part to play in life. Additionally, from Aaron’s shortcomings, you learned that we can easily be led astray and that we shouldn’t criticize others.

2 replies to 3 Life Lessons From Aaron In The Bible