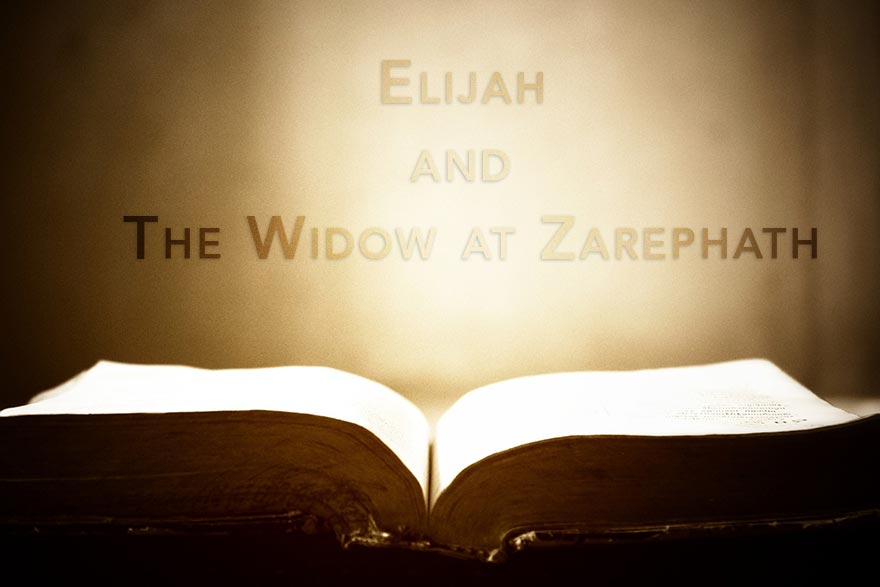 The story of Elijah and The Widow at Zarephath is one of faith, obedience, and generosity. Found in 1 Kings 17, it has 3 lessons that challenge us to trust God, faithfully manage the little, and to help others. In this article we’ll look at each of those lessons.

Be Obedient Even When It Doesn’t Make Sense

First, Elijah obeyed God when God told him that a widow would supply him with food. Of all the types of people that could provide for him, God mentioned someone least likely to have it. In those days, to be a widow, you likely didn’t have much. So to the average person it wouldn’t make sense that a widow would be able to help.

What’s more? When Elijah encountered the widow, she mentioned that she had little left. It was just enough for a last meal for her and her son. But even though it didn’t make sense, Elijah obeyed God. Elijah understood that if God said the widow would provide, it had to happen some way or another. And it did.

The Widow of Zarephath Obey Elijah

Secondly, The Widow of Zarephath obeyed Elijah when it didn’t make sense. When Elijah approached her, he told her to make him some bread of the little she had before she did for herself and her son. Now put yourself in the widow’s shoes. Would it have made any sense to you to do what Elijah said?

To make things more scary, Elijah told The Widow of Zarephath that God said the food won’t run out. Even though none of it made sense, The Bible says, “She went away and did as Elijah had told her. So there was food every day for Elijah and for the woman and her family” (1 Kings 17:15 NIV).

These two acts of obedience by Elijah and The Widow of Zarephath are a reminder to us to be obedient to God even when it doesn’t make sense. We may not be able to see how He will work things out, but we can trust that he will.

Be Faithful With The Little

Another lesson from the story of Elijah and The Widow of Zarephath is to be faithful with the little. This lesson builds on top of being obedient and stems from the widow’s handling of the little she had.

The Widow of Zarephath told Elijah, “I don’t have any bread—only a handful of flour in a jar and a little olive oil in a jug. I am gathering a few sticks to take home and make a meal for myself and my son, that we may eat it—and die” (1 Kings 17:12 NIV).

Despite that, Elijah told The Widow of Zarephath to go home and make him bread first (1 Kings 17:13). Did it matter if she made bread for Elijah first? Elijah’s command must have been a test. In any event, trusting that God would provide more, she obeyed and as a result had no lack.

There is a blessing that awaits the one that handles the little they have well. We can even argue that if it’s only a little you have left, it’s probably worth treating it as a seed. That’s what The Widow of Zarephath did. It was just a little she had left, so she trusted God with it instead.

What little that you have that you can be more faithful with? What can you do to gain God’s trust with it so that He deems you faithful and blesses you with more? Don’t look down on the little. Like The Widow of Zarephath last bit of flour and oil was, it may be your seed that can lead to an abundance.

The People You Help Today May Help You Tomorrow

After the miracle, The story of Elijah and The Widow of Zarephath went on to reveal another lesson. That lesson is the people you help today may help you tomorrow.

After The Widow of Zarephath obeyed Elijah, she was hospitable to him by allowing him to stay in her home along with her and her son. That help, which came after her giving up some of her last bit of bread, positioned her to get help from Elijah when she later needed it.

That part of the story starts in 1 Kings 17:17. It states, “Some time later the son of the woman who owned the house became ill. He grew worse and worse, and finally stopped breathing”.  Then, pointing to the fact that Elijah was now comfortable staying at the widow’s house, verse 19 states:

‘“Give me your son,” Elijah replied. He took him from her arms, carried him to the upper room where he was staying, and laid him on his bed.

After that the boy’s life returned to him.

Take Advantage of Each Opportunity To Help Others

Whenever you get an opportunity to help someone, help them. You never know how a small act of kindness done today can lead to your blessing tomorrow. The Widow at Zarephath had no idea her son would later fall ill. If she hadn’t helped Elijah with food and accommodations her and her son would have not made it.

So remember that anything can happen. Do what you can to help others today. As the saying goes, “today it’s me, tomorrow it’s you”.