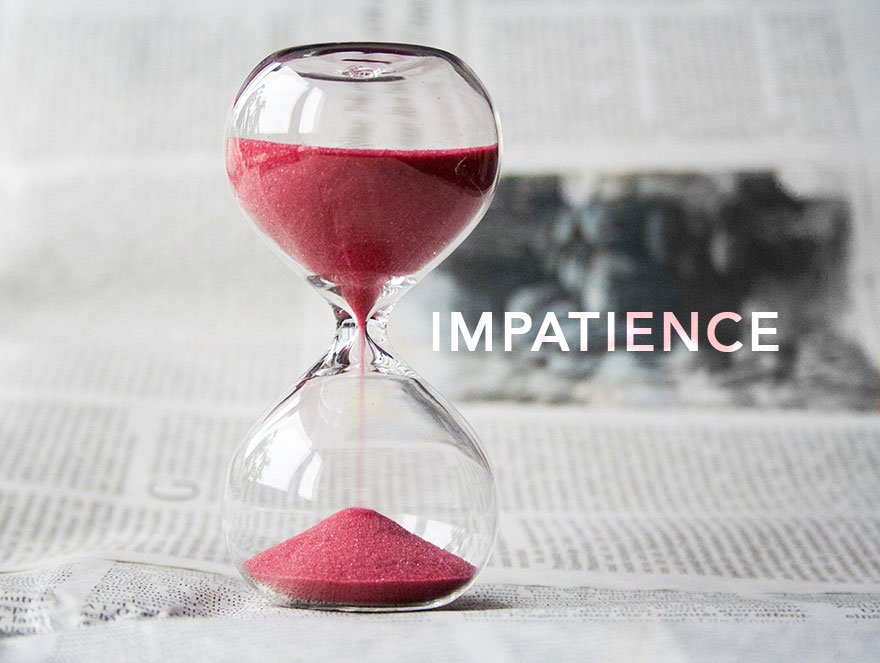 Since impatience is something we all struggle with, it comes as no surprise that there are stories of bible characters that were. In this article, I’ll share 3 stories of impatience and a key lesson we can learn from each.

Abraham and Sarah Were Impatient About Having A Child

Abraham and Sarah are generally a model couple, but their impatience when it came to having a child shows us how rushing a process can lead to stress.

Although God had blessed Abraham and promised to make him a great nation, all that seemed insignificant to Abraham in light of him not having any children. Abram, as he was called at the time, said to God:

“O Sovereign LORD, what good are all your blessings when I don’t even have a son? Since you’ve given me no children, Eliezer of Damascus, a servant in my household, will inherit all my wealth. You have given me no descendants of my own, so one of my servants will be my heir”.

In response, God told him “No, your servant will not be your heir, for you will have a son of your own who will be your heir” (Genesis 15:4 NLT). Having a promise to hold on to, Abraham and Sarah began to wait.

Hagar conceived, but when the child was born it was the start of stress for both Abraham and Sarah. Hagar began to despise Sarah and in turn, Sarah began to cast blame on Abraham for her misery.

In time, Abraham did have a child through Sarah as God intended, but since they were impatient, they had brought on themselves stress on the path to getting there.

A Key Lesson From Abraham and Sarah’s Impatience

A key lesson from Abraham and Sarah’s impatience is that impatience is a fruit of a lack of faith. God promised them a child, but as they got older they began to see it as impossible so they tried it their way.

Whether it’s a child as in the case of Abraham and Sarah or any promise God makes to us, we must remember that His timing is best and believe that He will follow through. Not waiting and taking matters into our own hands causes us to rush the process which can lead to stress.

The Israelites Were Impatient With Moses

Although God chose the Israelites to be a blessing to other nations, they had much to work on as individuals. One of those things was patience. In one particular story, their impatience caused them to do something so bad in the sight of God that it made God want to destroy them. Let’s take a look.

The Story of The Golden Calf

You may already be familiar with the story of The Golden Calf. It’s found in Exodus 32. Moses, the leader of the Israelites at the time, was on mount Sinai speaking with God. In the eyes of the Israelites, Moses was taking too long to come down from the mountain and so they told Moses’ assistant Aaron:

“Come, make us gods who will go before us. As for this fellow Moses who brought us up out of Egypt, we don’t know what has happened to him.”

Sensing their impatience, Aaron gave in to their request and used their gold earrings to make them an idol in the form of a golden calf.

That made God angry and He was prepared to destroy them. Thankfully for them, Moses convinced God to relent from his anger, but in the end, they were still punished. About 3,000 of them died because of actions stemming from impatience (Genesis 32:28).

A Key Lesson From The Israelites’ Impatience

A lesson that stands out in the story of the golden calf is that our impatience could cause us to seek inferior substitutes. In the case of the Israelites, Moses’ delay led them to find an idol to worship instead.

We may find ourselves doing similar things because we are impatient. We may go back to our old way of living when we don’t experience the benefits of being a citizen of God’s kingdom soon enough.

Once I was working a job and I started to feel like I wasn’t being promoted soon enough. That caused me to consider a former employer that had an opportunity. The former employer was not nearly as nice of a place to work compared to my current one, but because I was impatient I came very near to returning there. Thankfully I came to my senses and in time the promotion came.

So beware of letting impatience cause you to settle for less.

The story of Amnon and Tamar is an example of how our impatience may negatively impact others.

The Story of Amnon and Tamar

The story of Amnon and Tamar is found in 2 Samuel 13. Amnon was in love with Tamar and she was his brother Absalom’s sister. Based on some advice Amnon received, he devised a plan to get him and his sister alone so he could sleep with her.

Pretending to be sick, Amnon requested his sister Tamar to serve him and when she came he grabbed her and said, “Come to bed with me, my sister” (2 Samuel 13:11 NIV). In response, Tamar told him not to force her and that he should speak to the king who would not keep her from marrying him.

Sadly he couldn’t wait and decided to rape her. Afterward, he hated her and since she was disgraced, “Tamar lived in her brother Absalom’s house, a desolate woman” (2 Samuel 13:20 NIV).

A Key Lesson From Amnon’s Impatience

A key lesson from Amnon’s impatience is that our impatience could negatively impact others. Because he couldn’t wait, Amnon’s one-time action affected Tamar for the rest of her life.

We see similar consequences of impatience happening today. For example, in traffic, people rushing to get to their destination sometimes cause accidents that leave people disabled or without a loved one. And people’s impatience with success leads them to exploit others.