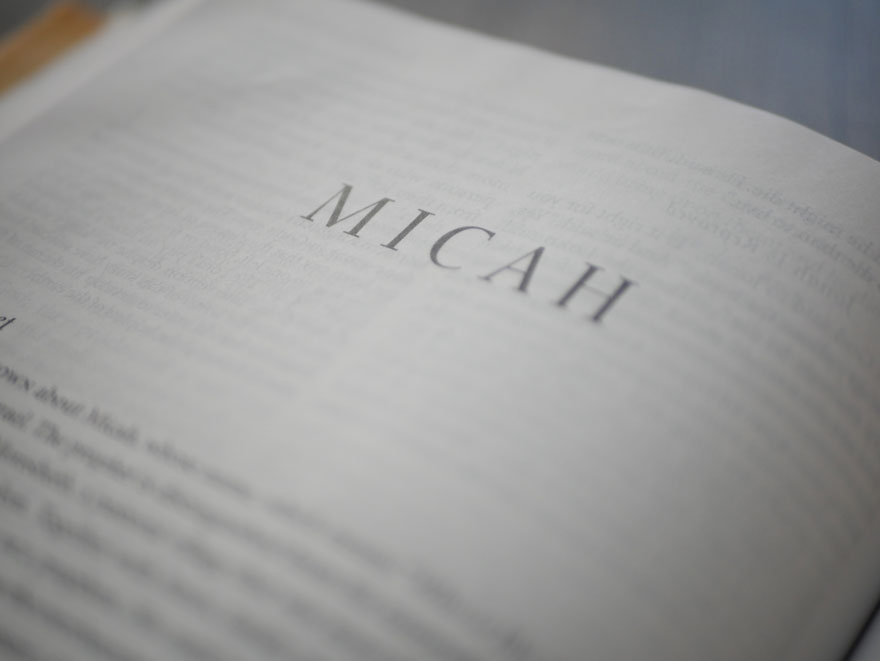 In the book of Micah, we see the prophet Micah prophesying judgment against Samaria and Jerusalem for their sins and declaring future promises such as a time where the Lord himself will rule from Zion. Hidden in the details of these prophecies, here are 5 lessons you can use to improve your life starting today.

1. Don’t Only Listen To Those Who Agree With You

There is a danger many of us face and don’t realize it. We tend to only accept ideas that support our existing views. This is fine, once our views are perfectly aligned with God’s, but since that’s not usually the case, we must be careful. In Micah 2:11 it states “If a liar and deceiver comes and says, ‘I will prophesy for you plenty of wine and beer,’ that would be just the prophet for this people!” (NIV). This passage shows how the people would have been thrilled to have a person, claiming to be lead by God, declare things that are in alignment with their sinful desires.

While it may not be to the same extent, believers may find themselves with a similar attitude. When you only listen to those you agree with, you risk keeping the wrong ideas about life. Those wrong ideas will keep you where you are causing you to miss out on a more successful way of life.

Some may say it’s important to protect one’s self from being led astray by the wrong information. That’s a valid point, but unless you can confirm that the source is not trustworthy, it only means that you are resistant to new ideas. Just like you had to be open to give your life to the Lord, be open to other revelations and truths although it may make you uncomfortable.

2. Being Blessed Or Cursed Is Up To You

In life, some people blame the devil or God for their state. When things go wrong, they may say “the devil is at work.” When something happens the way they wanted it to, they may say “God is good!” While God indeed blesses us and the Devil does get permission every so often to cause trouble, in general, being blessed or cursed is up to the person. In the book of Micah and highlighted in many other books of the bible, God indicates that he leaves it up to us whether we are blessed or cursed. At the end of Micah 2:7, God asked a rhetorical question: “Do not my words do good to the one whose ways are upright?” Now, how is this so?

In scripture, whenever God makes a promise to bless people, he usually associates that blessing with a condition. The pattern goes like this, “If…Then…”. If you do this, then I’ll do that. By the same token, the lack of doing a particular thing has its results as well. In Joshua 1:8 God told Joshua “If you keep this law…then you will make your way prosperous and successful.” Another example is ‘If you declare with your mouth, “Jesus is Lord,” and believe in your heart that God raised him from the dead, you will be saved.’ Romans 10:9 (NIV).

The “If…Then” pattern is found all throughout life. Everything we see around us is a result and you can think of that result as a “then”. Recognizing the “then”, you can work your way back and discover the “if”. For example, for a couple to be happily married, they must have met conditions such as loving and respecting one another.” For someone to be sent to prison, they must have met the condition of breaking a law.

The third lesson from the book of Micah is likely something you experienced. Were you ever promised something by someone who acted like that was not the case whenever they spoke to you? Or maybe someone did you wrong but continued on as if everything was fine. In such instances, chances are you couldn’t focus on anything other than what the person had done. Anything they said to you was ignored because of what they did or promised you.

There is a similar situation between God and the people under his judgment in the book of Micah. In chapter 3 verse 4 it states “Then they will cry out to the Lord, but he will not answer them. At that time he will hide his face from them because of the evil they have done” (NIV). God made it clear that he was not going to answer them when they tried to get his attention because of their evil. In other words, they were not in the right position to be heard by God.

Likewise, if you are not in the right position before God or man it’s unlike you will be heard. Now to be clear, technically you will be heard, but what it means is you won’t be listened to or taken seriously.

Jesus Puts You In The Right Position

Another example of this is Jesus being the way to God. In John 14:6, Jesus said, “I am the way and the truth and the life. No one comes to the Father except through me” (NIV). Without Jesus, no one is in any position to come to God. The dept of sin keeps them back. Through Jesus however, their debt is paid for, and they are then in the right position to approach God.

4. Don’t Take Anyone’s Word For It

Often, we hear people say things and accept it as the truth without investigation. While for somethings like a story exaggerated by a friend, it might not matter, but for other things that impact your faith and life it does. In Micah 3:5 God says “As for the prophets who lead my people astray, they proclaim ‘peace’ if they have something to eat, but prepare to wage war against anyone who refuses to feed them” (NIV).

Prophets and other leaders hold influential positions, and what they say is often considered the truth without question. But in the book of Micah, we see prophets saying things that are leading people astray. This should come as no surprise, but this also shows how some leaders don’t have the right motives.

These prophets mentioned in Micah were giving people the wrong information and that information, as the theme of the book suggests, is likely why God began to punish them. Leaders that supposedly represented God, condoned the sinful behavior of the people. We should respect our leaders, but we shouldn’t simply take everything they say as the truth. Like the Berean Jews who “received the message with great eagerness and examined the Scriptures every day to see if what Paul said was true” (Acts 17:11 NIV), we should all take messages from leaders and verify them using the Word of God also.

5. When Things Are Going Bad, Make Sure It’s Not Your Fault

In life, bad things happen. To the people they happen to, sometimes it’s not their fault, but sometimes it is. Over time, bad things that repeatedly happen to us that are our fault, we may begin to see as not our fault. When this happens, it leads us to accept the way things are and perhaps continue living with a silent resentment towards God.

In Micah 6:13, God tells the people specifically why he is punishing them. He says “Therefore, I have begun to destroy you, to ruin you because of your sins” (NIV). Just before that, God points out the things the people were doing that began to cause their ruin. These things probably didn’t seem “too bad” to those that were doing it, but God said he can’t ignore their “ill-gotten treasures” and “dishonest scales”.

In life, we can sometimes get to the point where we condone certain sins in our lives. At first, they may have made us feel guilty, but doing them repeatedly without immediate consequences may lead us to get comfortable committing them. We all know God is patient, and want’s everyone to come to repentance (2 Peter 3:9), but at a certain point, the consequences of sin will become evident. When it does, it may be unclear that it’s our fault, but a deep examination would reveal it is.

There are times when the issues we experience in life are not our fault. As you probably know, in the story of Job, he went through his suffering not because he was a sinful man. So, in life, whenever things are going bad, examine your life to be sure it’s not because of your wrongdoings. If it is, be wise and make the necessary changes.

5 replies to 5 Life Lessons From The Book of Micah