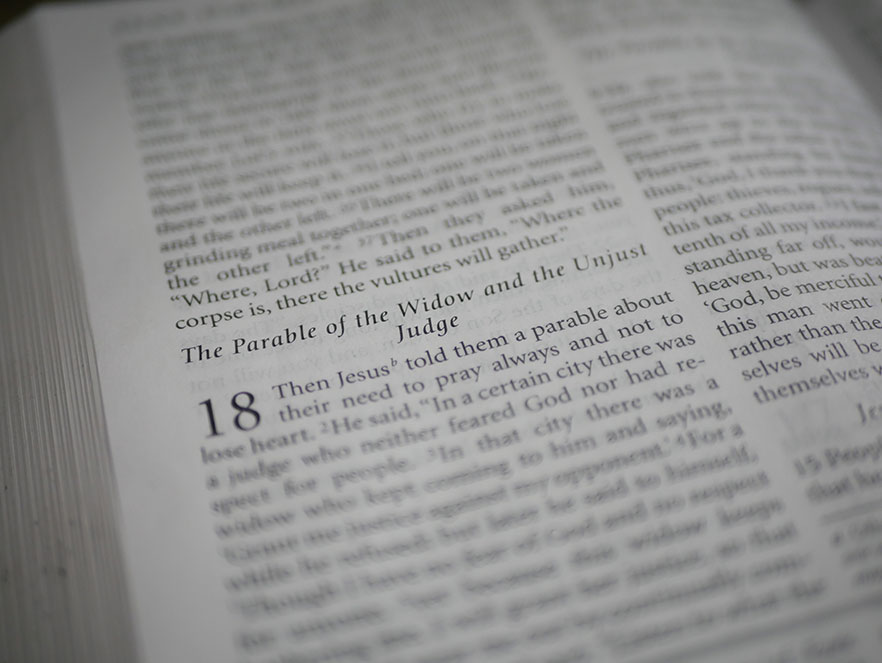 Prayer is a key component of a believer’s life, yet it seems like one of the most challenging things to do consistently. In Luke 18:1-8 Jesus addresses this reality through The Parable of The Persistent Widow, also known as The Parable of The Widow and the Unjust Judge.

In this article, I share some of my reflections on the passage. I also wrote 4 Lessons To Learn From The Parable of The Persistent Widow which has additional points.

After reading the opening of Luke 18:1-8, I was reminded that God knows everything and in this case that we’d lose heart when it comes to prayer. In fact, it’s the reason the passage says Jesus gave the parable.

“Then Jesus told his disciples a parable to show them that they should always pray and not give up”.

Losing heart in prayer is without a doubt a reality for many of us. How often have you begun praying and while doing so wondered if there was even a point? For me too much to count. Whether it’s because of unanswered prayers or the inability to speak fluently the reasons are many why praying may seem difficult or not worthwhile.

Admitting to the difficulty of praying consistently leads us to the end of Luke 18:1-8. What Jesus said is a little depressing, but it gave a hint at what’s necessary to pray and not give up.

After illustrating that God does provide answers, Jesus asked, “However, when the Son of Man comes, will he find faith on the earth?” (Luke 18:8 NIV).

It seems that having the knowledge that God answers prayers isn’t enough to keep us praying consistently. I suppose this isn’t surprising since many people who know better don’t do better. In any case, as the same verse implies, faith is a key ingredient for consistent prayer.

Hebrews 11:1 says, “Now faith is confidence in what we hope for and assurance about what we do not see” (NIV).

Based on Hebrew’s definition of faith, I guess it’s expected that we feel unsure when we pray. No one has seen God, so the logical mind would consider prayer to be nonsense. Hence the need for faith; breaking from all logic and simply trusting God hears and answers prayers.

Another observation I made as I reflected on Luke 18:1-8 was that God’s character should give us confidence when we pray.

Jesus described the judge as one that “neither feared God nor cared what people thought” (Luke 18:2 NIV). Then he went on to say that the judge only granted the persistent widow’s request so that he wouldn’t be worn out by her continual coming.

Such characteristics he contrasted with God saying, “And will not God bring about justice for his chosen ones, who cry out to him day and night? Will he keep putting them off?” (Luke 18:7 NIV).

In essence, if a human being will ultimately grant a request for selfish reasons, how much more can we count on God doing so for his chosen ones?

This brought Luke 11:13 to mind which says, “If you then, though you are evil, know how to give good gifts to your children, how much more will your Father in heaven give the Holy Spirit to those who ask him!” (NIV).

God has a higher standard than man. Therefore, when praying we should recognize that we aren’t dealing with a human being that has limitations or ulterior motives. That said, we can have the confidence that when we pray he will answer justly.

God’s Concept of Quickly Answered Prayer Is Different From Ours

Another observation I made as I reflected on Luke 18:1-8 is that God’s idea of a quickly answered may be different from ours. In verse 7, Jesus said “And will not God bring about justice for his chosen ones, who cry out to him day and night? Will he keep putting them off? (NIV).

He indicated that God will bring about justice (an answered prayer), yet the same verse shows that it doesn’t necessarily come right away. How so? Well, he references that the chosen ones seeking it may be crying out to him day and night.

In another translation, instead of “Will he keep putting them off”, verse 7 ends with “Will he delay long”. I imagine the issue is, we don’t know what is quick to God. While reading some biblical prophecies I noticed that some span a few verses but reflect a long period of time. (e.g. Joel 2).

Furthermore, speaking of scoffers that will come saying that his coming is taking long, 2 Peter 3:8-9 says, “But do not forget this one thing, dear friends: With the Lord, a day is like a thousand years, and a thousand years are like a day. The Lord is not slow in keeping his promise, as some understand slowness…” (NIV).

So at the end of the day, we should not pray with a human perspective of a quickly answered prayer means. Doing so will likely lead to discouragement.

God Hears Right Away But For The Answer, There May Be A Delay

On a similar note, when I considered the delay in receiving an answer and the overall point Jesus was making about the need to pray and not give up, Jesus teaching on prayer in Matthew 6 came to mind.

Initially, it appears to be a contradiction, but upon further thought, a difference stood out. In Matthew 6, Jesus said, “And when you pray, do not keep on babbling like pagans, for they think they will be heard because of their many words” (Matthew 6:7 NIV).

It may seem like repeating a request in prayer is the same as the babbling Jesus said not to do, but it doesn’t seem so. In the ESV it says “do not heap up empty phrases” and in the KJV, “use not vain repetitions”, then the verse says they think they will be heard by doing so.

God being God hears us right away. But for some reason or another, the answer doesn’t come right away. So while praying it’s no need to attempt to get his attention by “vain” repetition. But by the same token, he doesn’t expect us to stop seeking him when we don’t see an answer after the first request.

The key reflections from Luke 18:1-8 were that Jesus anticipated we’d lose heart in prayer so having faith is important to not give up. God isn’t like a man so we can have confidence when we make a request of him. And our concept of a quickly answered prayer is different from God’s, so we shouldn’t let our expectations discourage us. I hope you were blessed!

Articles referenced in this reflection:

Filed Under: Reflections Tagged With: Parable, Prayer, The Persistent Widow